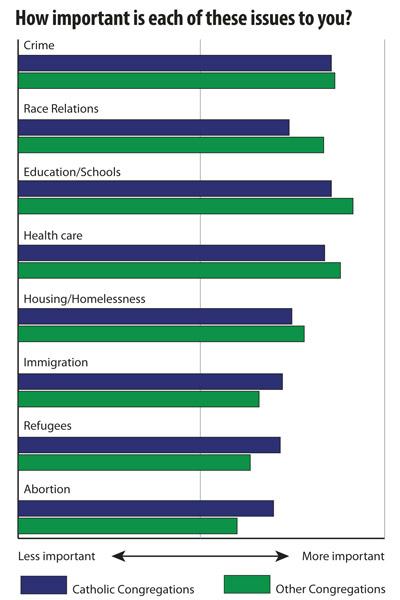 Catholics, Protestants, Jews and Muslims in Little Rock were given questionnaires and in some cases individually interviewed to find out one simple truth: How does the community and political activities of religious organizations influence their congregants?

It was all for the 2016 Little Rock Congregations Study, which revealed that people in faith communities actively engaged in helping their community have better political efficacy; that is, they believe they can make a difference. Nearly 70 students of Dr. Rebecca Glazier, University of Arkansas at Little Rock associate professor of political science, and of Clinton School assistant professor Dr. Warigia Bowman, gathered the data during the fall semester. The results were revealed at the 14th annual Racial Attitudes in Pulaski County Conference at UALR April 13.

“I was really excited to see how many people viewed themselves as politically different than those they worshiped with,” said Glazier, the primary investigator for the study. Half of all surveyed said their political beliefs were very or somewhat different than their fellow worshippers. As society grows increasingly divided, this is a “hopeful message that people are worshiping with people that they believe they have political differences with but they’re still attending and worshiping together,” she added.

There were 1,474 congregants of 17 houses of worship in Little Rock, which included two Catholic churches, other Christian churches, a Jewish temple, a Mormon church and a mosque, who answered a two-page questionnaire covering topics including community engagement, religious beliefs, political interest and personal attributes. It also included ranking by importance of issues including immigration, abortion, health care and race. St. Edward Church, both English- and Spanish-speaking members, participated and the other Catholic church chose to remain anonymous.

This was a larger study based off of Glazier’s initial findings in 2012 which surveyed five churches in Little Rock with 274 respondents. Glazier emphasized the study was not meant to make people “feel uncomfortable and too politicizing,” but revealed voter confidence was lower in the 2016 study versus 2012.

In the 2016 study there were 84 clergy surveyed and among those, 69 were also interviewed, according to the study’s executive summary.

The key findings were:

• Those who hear sermons more about community involvement are more involved in helping those in need and have better political efficacy.

• Clergy can encourage “socially positive community engagement” and greater political efficacy by talking about it and leading by example.

A 27-page white paper explained basic tenets of the various religions and noted that the Catholic Church “supports elements of both liberal and conservative politics.” Citing a variety of research, Catholics in general are more likely to take part in a march on a topic that they’re passionate about, while mainline Protestants are more likely to hold a discussion group on a political issue.

Catholics ranked education, health care and crime as top concerns. Glazier said the “biggest gap” she noticed between Catholics and other faithful was that Catholics were more likely to hear what are considered political issues at Mass, particularly about abortion.

Other data results for Catholics included:

• Catholics had lower confidence that their choice in the 2016 presidential election was the best candidate. The average for other faith groups was 72 percent in terms of how confident they were in their vote, compared to 68 percent for Catholics.

• Catholics hear more about abortion from the pulpit at 55 percent compared with just 5 percent for others.

Glazier said St. Edward’s participation in the study was “fantastic,” and that she hopes to do a better job in the future of translating the survey in Spanish so more Latino respondents feel comfortable participating. Father Greg Luyet, pastor at St. Edward Church, said he was impressed by the professionalism of the Clinton School students who came to the parish in November to administer the questionnaire and conduct interviews.

“I think the response was positive. One, being able to work with the Clinton School and assist them and their students” to bring awareness for this study to the larger community, he said, and two, “people enjoyed sharing what we do as a parish.”

The study will be conducted again in 2020, and Glazier said she hopes to expand to more places of worship in both rural areas and beyond Little Rock. Because community involvement was a priority for many people of faith, she said she hopes more interfaith work can take place.

“I think there’s a lot of hope for religious organizations to do some of the healing we need as a country and getting people civically engaged and helping in their communities and solving these hard problems,” she said.

For more information about the study, to volunteer for the 2020 study or for clergy who want to participate in other religious surveys, contact Glazier at .