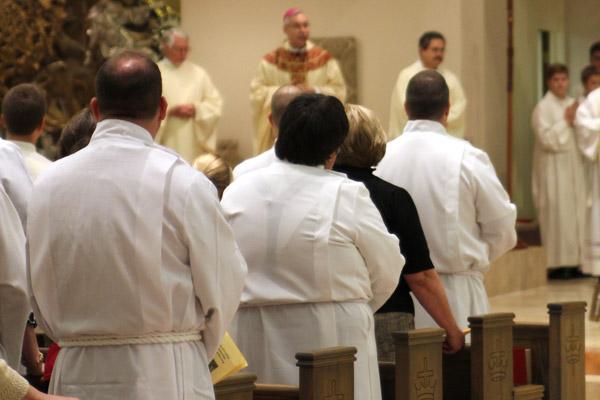 Arkansas Catholic file
Bishop Anthony B. Taylor installs 41 members of the previous diaconate class to the ministry of acolyte Nov. 20, 2011, at Christ the King Church in Little Rock.

Arkansas Catholic file
Bishop Anthony B. Taylor installs 41 members of the previous diaconate class to the ministry of acolyte Nov. 20, 2011, at Christ the King Church in Little Rock.

Nearly 70 men will begin the journey this fall toward becoming permanent deacons for the Diocese of Little Rock.

About 130 men who discerned a calling to the diaconate then met in monthly small discernment groups from January to September 2016, led by deacons and their wives.

“We were happy and surprised that we had 130 people in discernment,” said Father Erik Pohlmeier, diocesan faith formation and diaconate formation director.

After completing nine months of prayer and reflection on their calling, he said 85 men said they were interested in applying for the five-year program.

The 69 men who will begin their aspirancy year are:

• Benton, Our Lady of Fatima
Dan Cartaya and Ron Lee

For the first year, the men will be called aspirants and the formation will focus on human, spiritual, intellectual and pastoral formation. They will also learn study skills because most of them have not been in college-level courses in decades.

In 2018 the men can ask Bishop Taylor to accept them as candidates. In their candidacy years from 2018 to 2022 the courses will focus more on theological studies.

Father Pohlmeier, whose father Tom is a deacon at St. Joseph Church in Paris, said Bishop Taylor told him these deacons will be like “glue” to their parishes.

“(The bishop) said they aren’t to become leaders in a traditional sense,” he said. “He said they are to become glue for their parishes. They don’t become second in command after the pastor. They can be bridges in the parish to heal or reconcile or to help with transitions since deacons don’t change from parish to parish the way priests do. They can become a consistent presence as glue for the community.”

For the first time, the diocese is providing the candidacy program in English through St. Meinrad Seminary in Indiana. Since the program was begun in 1999, St. Meinrad has worked with 22 dioceses to train 450 permanent deacons. The diocese works closely with the seminary for priestly formation of most of the diocese’s seminarians. Instructors will provide in-person and online courses for 11 months a year for five years. For the Spanish formation, diocesan clergy and laity will lead in-person courses at Subiaco Abbey over the same period.

The diocese began its previous diaconate formation class in 2008 and ordained 40 men in 2012.