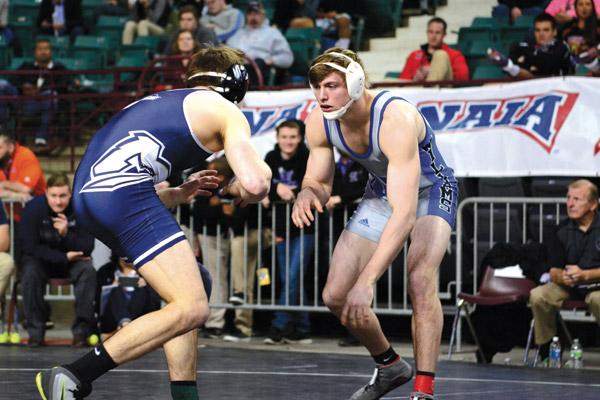 Josh Chiles has a knack for making the record books. As a 182-pound senior at Little Rock’s Catholic High School, Chiles’ 2014 state title led the school to its first — and thus far only — team state wrestling championship. He’s also one of the select few Rockets to win back-to-back individual state titles, also taking the gold medal at 195 pounds as a junior.

This year, he again made history, in grand fashion. A junior at Williams Baptist College in Walnut Ridge, Chiles placed fourth at March’s NAIA National Championships in Topeka, Kan. In so doing, he earned All-American honors, the first Arkansas high school graduate to earn such a distinction in wrestling at any collegiate level.

“Somebody told me right after my match that I was the first to be an All-American and I was so happy about that,” he said. “It means a lot. I feel like I’m kind of a part of Arkansas wrestling history. It’s really cool. I like to have that on my name.”

Chiles’ historic accomplishment was an unlikely one. He didn’t start wrestling until he was a sophomore at Catholic and while a combination of natural ability, weight room work ethic and direction by National Wrestling Hall of Fame Coach Paul Mammarelli turned him into a state champion, college was an entirely different arena.

“Yeah, it’s a huge transition,” Chiles said. “I went from being one of the best in the state of Arkansas to getting beat in practice every day. College wrestling is a whole different game. It’s just a lot harder. I’d definitely say that.”

“We’d assembled a pretty good team from the get-go here with kids from some tougher states in terms of wrestling,” said Williams Baptist College head coach Kerry Regner. “We had a couple of guys from Illinois and Pennsylvania that were around Josh’s weight that would beat him.

“In other sports you wouldn’t hear about a quarterback going to play college football if he started playing as a sophomore in high school. Usually he’s been doing that for a long time. (Josh) had very good fundamentals but as far as technique he had to improve a lot.”

Williams Baptist College has only had a wrestling program for three years, so when Regner recruited Chiles, it wasn’t just for his physical abilities but for the kind of character by which Regner wanted the program to be known. In this regard, Chiles didn’t disappoint as evidenced by how he attacked the transition to the collegiate level. He buried himself in the weight room and took every piece of coaching Regner threw at him.

“He has always really dedicated himself to his own personal training, like extra workouts, extra weight room, extra weight lifting,” Regner said. “The kid’s a horse; he can do two one-arm pullups without grabbing his hand. Some people can’t do two pullups. He can do it with one arm, at 205 pounds.”

“It’s an individual sport and I like that about it, how I can control my own destiny,” Chiles said with a shrug. “But I also like just how you have to be tough to do it and you can’t just show up and go to practice and leave. You have to put in extra work. You have to go hard in practice; the people that work hard, you can tell it how by they wrestle in their matches. I guess that’s one of the reasons I really enjoy it.”

Chiles entered the 2016-2017 season looking every inch a seasoned upperclassman, but after winning his first match at nationals, he was pinned by the top seed in under a minute. This dropped him into the consolation bracket with a long road to get into medal contention.

The challenge only seemed to stoke his competitive fire as he burned through three straight opponents, including the second-ranked grappler in the country by a 2-1 decision. Though he’d lose to the No. 4 seed in the bronze medal match, it was still the second-highest national finish in the history of the program and locked up his All-American status.

Chiles is majoring in biology with the intention of being a physical therapist. But first he’s got another year of competition to take care of and even his coach couldn’t predict exactly what Chiles was capable of, except to say, “He can do whatever he puts his mind to.”

As for the 21-year-old himself, there’s been a lot to reflect on with pride in just six seasons on the mat. Asked to rank the top accomplishment, he doesn’t even blink.

“I’m going to have to say being an All-American just because to me it’s a bigger accomplishment,” he said. “The fact that I was the first from Arkansas to do it is very satisfying.”