Why parents should care about ‘13 Reasons Why’ series

Father Jason Sharbaugh answers questions about the series and suicide 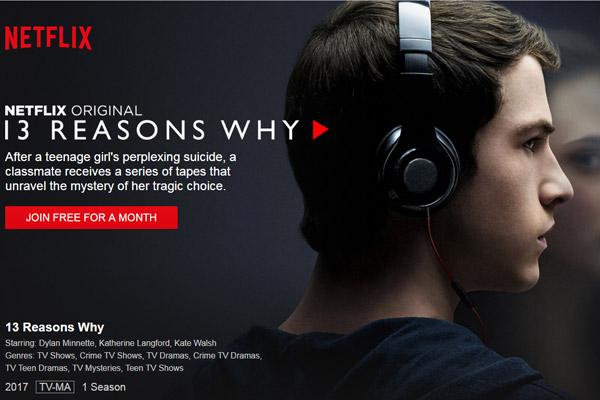 Screen capture of Netflix.com
This screen capture from Netflix.com promotes “13 Reasons Why,” which tells the story of a teenage girl who ended her own life and the 13 recordings she left behind explaining what led her to suicide.

Screen capture of Netflix.com
This screen capture from Netflix.com promotes “13 Reasons Why,” which tells the story of a teenage girl who ended her own life and the 13 recordings she left behind explaining what led her to suicide.

ROGERS — A Netflix online series, “13 Reasons Why,” is now the most-watched series since it premiered in March and it is probably the streaming service’s most controversial series too.

The show, based on a 2007 young adult book with the same name by Jay Asher, follows a teenage girl, Hannah Baker, who leaves behind a manifesto of 13 audiotapes revealing why she decided to tragically end her own life.

The series is rated “mature,” but its primary audience is middle and high school students. Her individual experiences are a reflection of current problems plaguing high schools, such as sexual assault, cyber bullying, depression and suicide.

Although the popularity of the 13-episode series has reached beyond the young adult audience, many parents, counselors and educators question the message the series sends to young viewers. The series isn’t just going to fade away either. Netflix has promised a second season in 2018 with the perspective of others in Hannah’s life.

Father Jason Sharbaugh, recently appointed formation director at St. Thomas Aquinas University Parish at the University of Arkansas, answers questions about the series and suicide and how parents can have a conversation with their teens.

Q. I understand this Netflix series is a story depicting high school students, but why is it so popular with young people when the protagonist ultimately commits suicide? Why is this something young people would want to watch?

A. Throughout time and different cultures, stories of rebellious teens and bewildered young adults coming of age and experiencing the challenges and struggles of life for the first time are commonplace. This particular age has been described by young people I talk with as vacillating between the “best years of ones life” to the “most painful and confusing.” Feelings of being “dazed and confused” at this age run rampant. This is why music is so often the vehicle that can explain emotions and thoughts that often can’t be articulated to anyone else. One young person’s reason for watching the series was because it was dramatic and controversial. Parents are the best judge of what their children should watch, but they need to be aware of the series hype. Because of the disturbing images and topics, young people need the strong “tread” of faith, family or outside support to make sense of these overwhelming emotions.

Q. What would you say to a young person who felt he/she had made a grave mistake or been involved in a situation they felt guilty about? How do individuals correct a mistake they feel they have made in their life and go forward?

A. When we feel pain or sadness, it let’s us know that we are alive, that things matter and that we can experience or share in other’s emotions and joys in life. Even the basic sharing of grief or loss with one another can begin the process of healing or of finding peace. Young people can feel trapped in a cycle of emotions, and it is important to share those feelings and involve other people that they trust and that they know ultimately care about them and their future. As adults we need to help teens realize this age of angst will end and there is much to look forward to and to realize there is life after high school.

Q. Netflix added viewer warnings this past week to make parents more aware of the content. Do you think some of the disturbing images depicted in the series can negatively affect a viewer or produce copycat behavior that is one of the leading causes of concern for mental health experts in watching the show?

A. Yes, images are powerful and stick in one’s mind. They can be logged in the subconscious long after one has generally stopped thinking or brooding about a previous image. Some individuals are more impressionable than others to media influences, and parents need to be aware of that. Our minds can gravitate toward dominant thoughts. So if a young adult is having suicidal thoughts, a parent, counselor, teacher need to help them work through those thoughts, dismantle them so as not to romanticize or dwell on them and to try to focus on something else.

Q. What practical advice would you give to a parent, teacher, youth leader or friend who suspects someone is hurting and could be crying out for help?

A. Parents, friends or counselors most definitely need to reach out and listen and take every threat seriously, so that the individual feels they can talk without overreaction. Oftentimes if someone will just listen to them and not turn something into a matter it is not is so powerful. This is one of the many beautiful realities of the sacrament of reconciliation.

If you suspect someone needs help, call the National Suicide Prevention Lifeline at (800) 273-TALK or text 741741.

“Finding Faith” is a new series focusing on issues of faith, morals and ethics for teens and young adults.