Latin Mass Community to be elevated to parish status

Church, hall in Cabot purchased with money saved by community for 23 years 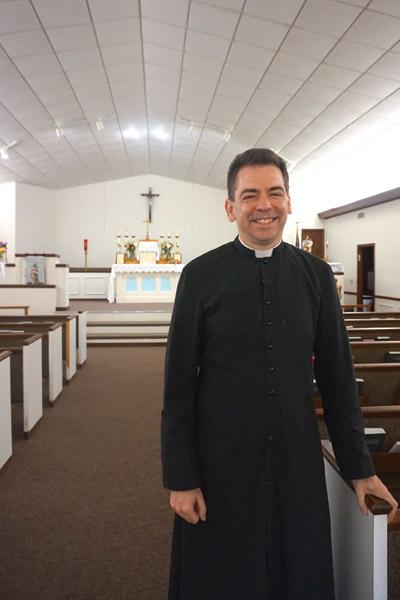 Aprille Hanson
Father Joseph Orlowski smiles in the sanctuary of the new church purchased by the St. John the Baptist Latin Mass Community. It is the first time in the community’s 23-year history that they have a building of their own.

Aprille Hanson
Father Joseph Orlowski smiles in the sanctuary of the new church purchased by the St. John the Baptist Latin Mass Community. It is the first time in the community’s 23-year history that they have a building of their own.

CABOT — For people of faith, heaven is the eternal destination. But while here on earth, a parish building can be the place where people learn, grow in their faith and build a community of fellowship. It is a spiritual home.

St. John the Baptist Latin Mass Community finally has a place to call home that’s all their own. On May 15, the community paid $215,000 in cash to buy a building and land in Cabot at 106 Pin Oak Drive, which was previously used as a daycare and earlier a Baptist church. The Latin Mass community was established 23 years ago at St. John Center in Little Rock. In recent years, it has used the St. Patrick Church sanctuary in North Little Rock to hold traditional Tridentine Masses for the roughly 180 people who attend the weekend Masses, traveling from cities like Batesville, Conway, Benton and Little Rock for traditional worship.

“For 23 years we’ve been saving. Father (John) Berg, our superior general, came from Switzerland to talk to people. One thing he said was, ‘It just makes so much difference to have a place of your own.’ And I think the place will grow,” said chaplain Father Joseph Orlowski, FSSP, who will be leaving in July for a new assignment.

His order, the Priestly Fraternity of St. Peter, was established by St. John Paul II to specifically serve Catholics devoted to the Tridentine Mass.

“We knew the future and growth of the community was incumbent on them having their own place. With your own place you have your own identity.” Father Gerard Saguto, North American superior for the Priestly Fraternity of St. Peter

Father Orlowski said parishioners have been saving up to buy a church building since the community was established. Father Gerard Saguto, North American superior for the Priestly Fraternity of St. Peter based in Scranton, Pa., led the process for finding and buying a building, with assistance from Jim Driedric, diocesan property service manager. In February 2015, the community began actively looking for a building to lease or buy or buy land to build.

“We knew the future and growth of the community was incumbent on them having their own place. With your own place you have your own identity. The bishop’s support for this made it a lot easier,” Father Saguto said.

It is the first Catholic parish in Cabot.

“The Blessed Sacrament now comes to Cabot,” Father Saguto said. “This is the most important thing. The Eucharist is now in Cabot. Our job is to bring that wonderful faith we have to the wider community.”

In mid-April, they found the 7,000-square-foot facility, which includes the church, office space and a hall, sitting on three lots with a playground. It also includes a kitchen, classrooms and six bathrooms. A house is being rented next door as a rectory.

“When we saw this place it was clearly a gift from God,” said Father Orlowski, who saw the facility with Bishop Anthony B. Taylor, Father Saguto and Driedric. “I walked in and thought, ‘I can start Mass there today if I needed to.’”

While the church, built in 1974, needs renovations, the first Mass was celebrated on Memorial Day weekend, Sunday, May 28 with almost 200 in attendance.

Driedric said having their own facility will allow Bishop Taylor to elevate them to parish status.

“That’s been their goal all along to become a whole entity. It’s been hard for them to do it when they’re borrowing space,” Driedric said. “Logistically, they have different rubrics than the contemporary rite does. So they’ve been in a situation where they’ve had to set up, tear down, set up, tear down and so that’s a lack of stability for them.”

On June 3, Father Orlowski said parishioners fixed up and organized things around their new church, including taking down an addition to an altar that will allow an additional 24 seats to be placed in the sanctuary, which will then seat about 150 people comfortably.

Despite the sun beating down, Courtney Cavin, along with her five young daughters, prepared a flowerbed around the large tree in front of the church June 1. She and her husband Patrick, of Conway, have been a part of the community for more than 10 years.

“I feel this has been a long time coming so we’re really happy about it,” Cavin said. “It’s really special to me that they have other kids their age; there’s a lot of young children in this parish, and I think that’s just wonderful that we can all be a big family.”

Congregants often travel farther than the average Catholic in central Arkansas to attend Masses in Latin, which makes having a facility that allows more chances for fellowship and activities after Mass important.

“Because we are very much a Sunday place, a destination place, we look forward to being able to have altar boy practices on Sunday, adult catechism on Sunday and then special classes, first Communion classes, things like that on Sunday. A lot of our families are homeschooled so they look to have catechism classes on Sunday,” Father Orlowski said.

Tom Pyron, who has attended the Latin Mass community for four years and serves as the parish’s director of communications, said in an email interview that having a facility is “fuel to the fire of growth.”

“Growth both in attendance and also in spiritual edification,” he said. “It’s an opportunity to have a more normal schedule with more frequent sacraments and devotions, along with a more consistent formation schedule for children and adults. The facility has high potential, and I personally am looking forward to more adult religious education opportunities.”

While this has been 23 years in the making, Pyron, who lives in Maumelle, said having their own space is just another way for congregants to stay focused on Christ.

“Being able to experience this very ancient liturgy is truly edifying for me, and I think it is important for Christians everywhere to not only be aware of it, but to experience it first hand,” Pyron said. “… Having our own parish provides a kind of silence that helps one focus their love for Christ, and keeps an open ear for the voice of God in our lives.”