Indoors or out, Mary Katherine Ashburn’s a volleyball ace 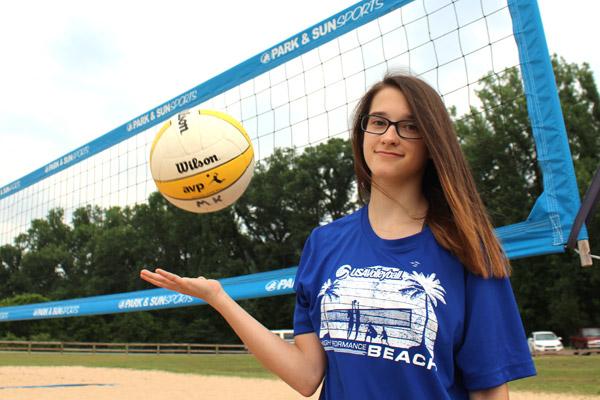 Dwain Hebda
Standout athlete Mary Katherine Ashburn hangs out between training sessions in Little Rock. The 13-year-old earned an invitation to attend elite training camps this year for both indoor and sand volleyball.

Dwain Hebda
Standout athlete Mary Katherine Ashburn hangs out between training sessions in Little Rock. The 13-year-old earned an invitation to attend elite training camps this year for both indoor and sand volleyball.

Just being around Mary Katherine Ashburn, you know she’s a terror on the volleyball court. Tall and lean, with good reach and the kind of angular body that can generate considerable torque through the ball, hers is a skillset that belies her tender age.

Talking to her, you know she’s the kind of player coaches love to have, smart enough to see the big picture and articulate enough to communicate strategy and positioning to teammates, with a tone that’s confident without crossing the line of braggadocio.

But it’s what you don’t know about this rising-ninth-grade volleyball prodigy that brings most visitors to a gaping, wide-eyed halt. Like how she got interested in sand volleyball after seeing it on TV with her dad, Deacon Chuck Ashburn. Or how she’s risen to the elite ranks of the sport, earning an invitation to the U.S. Olympic Training facility in San Diego, after only playing for a year.

Or the gem of all gems, which she shares in a confessorial tone, her loathing of sand.

“That’s been the one thing everybody is shocked about. I despise sand,” she said. “It gets everywhere at home, it’s just gross. Even my dad said, ‘I don’t think you should play sand anymore if you don’t like the sand.’”

It’s a small admission, but it catches one’s attention, given how far this Little Rock youngster has come playing outdoors. Ashburn drinks in your surprise, then snaps you back to reality like a defender tattooed by her wicked spike.

“I might not like the sand, but if I have to get on the ground to dig a ball, I’ll get on the ground and dig a ball,” she said, and you believe her. “It’s like in indoor; I have to fall on the floor a lot and it hurts. Just because I don’t like something about what I’m doing, doesn’t mean I’m not going to want to do it and pursue it.”

If you wonder how a land-locked native Arkansan can become so good so fast in a sport born on the beaches of sunny California, you haven’t been paying attention. The game has gained attention through Olympic and professional play and colleges have scurried to add the sport, which requires fewer players and relatively inexpensive facilities. This interest has trickled down to the high school, club and even recreational ranks; as evidenced by the sparkling new volleyball pits popping up like dandelions in Little Rock parks.

“Last year I was in an (indoor) club that UALR put on,” Ashburn said. “UALR had a player, Priscilla Almeda, who is Brazilian who had transferred for her last year and we got to know her really well. We found out that she used to live in Rio before she transferred here and she used to play sand volleyball.

“We started talking to her about it and how sand volleyball kind of intrigued me. One day she said she wanted to have a practice and I was like, ‘Oh, I didn’t know we had sand courts here in Little Rock.’ It amazed me.”

Ashburn, who attends the Cathedral of St. Andrew in Little Rock and is a student at Lisa Academy, proved a natural. After landing a partner, she started entering — and winning — tournaments all over the region. Her schedule was so demanding she could only make the last of several regional tryouts for San Diego, which was scheduled late in the year in Iowa.

“Most times when you’re playing sand, you’ve got maybe some clouds and you’ve got the sun and it’s nice and pretty outside and good temperatures,” she said. “When I went to Cedar Rapids, it was the complete opposite. It was cloudy, winds going 40 close to 50 miles per hour, raining and below 45 degree weather. It was dreadful.”

But prevail she did and it was off to the warmer climes of the USA Volleyball Beach High Performance camp and tournament in San Diego as part of the U.S. National Team program. At about the same time, she received word she’d also been invited to the U.S. Indoor High Performance National Skills Camp in July. Heady stuff for a self-described history nerd, but a ride she’s enjoying even as she maintains her perspective.

“For me, spiritual life has always been a really big part of things. Just to have a conversation with God and the ways he shows he’s actually here with me and helping me throughout everything I’ve done,” she said. “Since tournaments are always on weekends the number one priority, even besides doing well in this tournament, was how do I get to church this weekend. You know, are we going on Saturday night or early Sunday morning?

“It’s always been a center point. It’s one thing that’s always calmed me because I knew that if I just took a moment and sat there and took a deep breath I could feel he was always there beside me. I know I’m not alone in what I’m doing.”