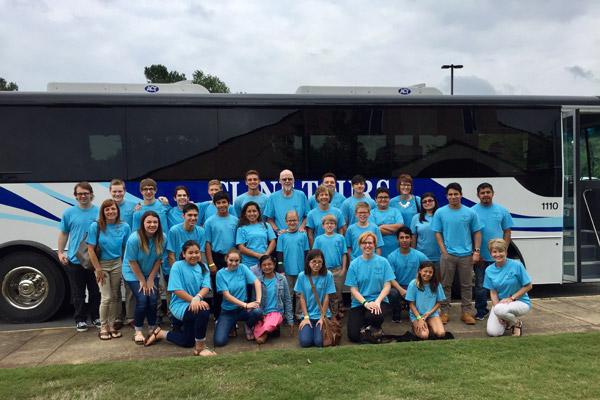 St. Mary’s altar servers were bused in from Hot Springs to attend the priest ordination May 27 for Father Luke Womack, who grew up altar serving in the parish.

St. Mary’s altar servers were bused in from Hot Springs to attend the priest ordination May 27 for Father Luke Womack, who grew up altar serving in the parish.

The faithful packed Christ the King Church in Little Rock for the priestly ordination of five men May 27, but there was one section that stood out -- a sea of blue shirts, worn mostly by children to young adults, all there to support newly ordained Father Luke Womack.

St. Mary Church in Hot Springs bused about 30 altar servers, from third grade to seniors, and 10 chaperones to see Father Womack, who was an altar server at St. Mary while growing up, be ordained to the priesthood. The tight knit group of servers, led by David Peters along with help from his wife Judy, proudly wore their altar serving T-shirts, with the words “St. Mary’s altar servers ROCK,” with the word also connected with the Scripture verse across it, “Upon this ROCK I will build my church.” (Matthew 16:18)

To the servers, the rock star was Father Womack.

“Really the kids were just so excited about it. We figured we’d have 10 maybe, 12, then it just started growing and growing,” David Peters said, adding that more servers signed up to attend Father Womack’s ordination than the annual server appreciation trip to Magic Springs Theme and Water Park in Hot Springs.

Peters said whenever Father Womack would return to St. Mary Church during holidays or special Masses, he’d make it a point to visit with the altar servers who were rehearsing for a special Mass or occasionally serve with them as a deacon.

“He would always go over to eat with them and talk to them. He was always so helpful in answering their questions … He’s just a nice guy. Really friendly with the kids, he has that good rapport with them,” Peters said. “I know he was touched tremendously.”

Kayla Kalahiki, 18, who will attend Hendrix College this fall in Conway, has served with Father Womack for years, including for his Mass of Thanksgiving May 28.

“I’m so excited for him. He’s such a great person, I love him so much,” Kalahiki said with a beaming smile. “When he does homilies they come from the heart.”

Peters said each of the altar servers would take something different from the ordination. There were those who had never seen one, some who had been to one and others, both male and female servers, who have already had stirrings of a call to religious life.

“Hopefully one of these will become a priest someday. But mostly it will be a long time before they see this again,” Peters said of a priest from their own parish ordained.

“It’s about supporting someone who used to be on the altar … To see someone develop into a priest, it’s cool to see that happen,” said 15-year-old Collin Gallimore, adding he has contemplated religious life. “It gives you hope and helps you decide, ‘Is this really for me?’”

Altar server Andrew Nehus, 9, looked up at his mother Stephanie as Bishop Anthony B. Taylor said at the end of the ordination Mass to congregants who were considering religious life, “Don’t just sit on it … Ask yourself, ‘Is the Lord calling me to serve him as a priest?’”

Stephanie and her sons Andrew and James, 7, had never attended a priest ordination.

“We’re very excited about it. My oldest son is interested in becoming a priest,” she said, adding that Father Womack has come to their home to visit. “There’s that personal connection.”

“It was pretty good,” Nehus said of the ordination. “He’s really nice; he’ll be a good priest.”

Peters said the altar servers are a family and seeing the ordination was just another fond memory for the group, especially those who have graduated.

“You may never serve on the altar again, but you will always be an altar server,” he said.