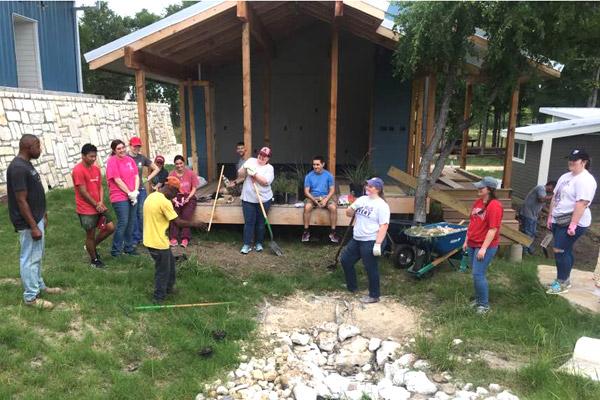 While on a mission trip at a community in Texas that gives permanent residence to the homeless, Arkansas State University student Clare Doss met a resident who touched her heart in a special way.

The man, now in his 50s, was put on a bus at 8 years old when his mother’s fiancé gave her an ultimatum — it was him or the child. The young boy wandered the streets, was taken in and raised by a prostitute, who helped him find his father at 15 years old. When he went to his father’s house for shelter, he had a gun pointed at him.

He had always lived on the streets until he found Christ, and Community First! Village in Austin.

“He was such a motivator. He’d say, ‘Keep going, you all are doing such awesome work, we love y’all,” Doss, 21, said. “I thought you know he was crushed down by the world kind of like Christ was and he has so much joy all the time. I think it just helped me to look at life differently and the fact that the only place you’re going to find joy is when you find Christ.”

This was just one of many life changing experiences that 30 students from four state colleges experienced May 15-19, volunteering at the 27-acre community, part of the Mobile Loaves and Fishes nonprofit.

The mission trip was funded through $29,000 in grants from the Daughters of Charity Foundation in St. Louis and Our Sunday Visitor Institute in Indiana.

“It was an opportunity to make a major difference in the lives of formerly homeless people,” said Liz Tingquist, director of the diocese’s Catholic Youth and Campus Ministry Offices, of the diocese-sponsored trip.

“I wanted the young people who are kind of the movers and shakers for us in the future to see something worthwhile and life changing can be done in their own communities,” she said.

The village, established in December 2015, is a community with 240 low-rent homes, a mix of RVs, micro-homes and canvas cottages, with more than 100 residents. The ministry is part of Mobile Loaves and Fishes, which has given more than four million meals to the homeless across four states.

The village includes chapels, a medical facility and several amenities, from an outdoor movie theater to a bed and breakfast for visitors, according to its website, mlf.org/community-first. It has several enterprises that include catering and metal craftsman work to train residents in new skills. The bus line also stops by the community for those with jobs outside of the village. It is Christian-based, but no one is ever pressured to convert.

“To have a group of students from Arkansas dedicate a week of their lives in Austin, Texas, helping to work on (landscaping around the) kitchens and other amenities at the Village is truly indicative of the level of support and generosity we’ve been blessed with from communities across the country,” Alan Graham, founder and CEO of Mobile Loaves and Fishes who is Catholic, said in an email. “This is a genuine example of what loving your neighbor looks like, and we are beyond grateful.”

The students worked on landscaping projects around outdoor kitchens.

“I think what I enjoyed most is bonding with the actual community members because we were actually living with them and getting to know them more,” Doss said. “They’d join in on some of our meals or when we were praying together.”

Elijah Mulder, 20, a junior at UA, agreed that both mission trips the past two years were eye-opening.

“I heard a couple stories, each one touched me. It really made what I was doing there more fulfilling,” he said. “It opened up my eyes to do more for the homeless and try to do more in my community as well.”

Davis, who recently took over at Jericho Way, which is run by Catholic nonprofit Depaul USA, said the value of putting community first was an important takeaway.

“I thought I knew what a home meant. Housing someone with four walls and a door is not a home … You’re housing the homeless, great, but is it a home? I can’t answer that, but that’s still an ongoing quest in my career,” Davis said. “It’s not housing first; it’s community first. It feels more like home than even my own home. There’s gardens, chickens, dignified working wages … that’s revolutionary … I was blessed to have the opportunity to go.”