Clarksville pastor formed by Benedictine monks as a youth 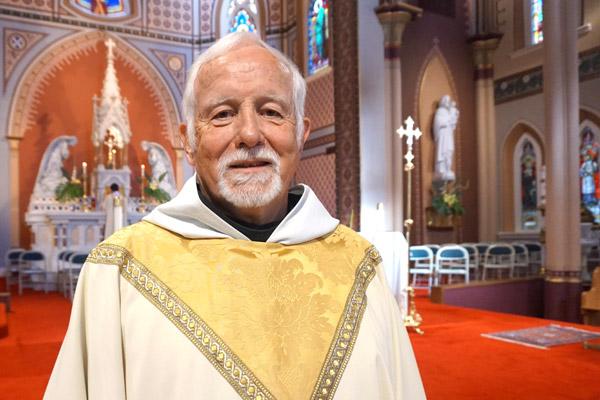 Aprille Hanson
On May 20, Father William Wewers, OSB, pastor at Holy Redeemer Church in Clarksville, celebrated 50 years as a priest of Subiaco Abbey.

Aprille Hanson
On May 20, Father William Wewers, OSB, pastor at Holy Redeemer Church in Clarksville, celebrated 50 years as a priest of Subiaco Abbey.

Gerald Wewers learned the value of hard work early, doing what was asked of him by his father.

“My father was a janitor at St. Boniface (in Fort Smith). Shortly after I got into the third grade. That school year dad said, ‘If you’re going to be here, which you have to you because you can’t go home until I go home, you might as well help clean classrooms.’ So I started cleaning classrooms,” he said.

Hardly enjoyable for a young boy, but he listened. It was the power of listening and obedience that allowed him to be open to the heavenly Father’s call of priestly service by way of the Benedictine tradition. On May 20, Father William Wewers, OSB, pastor at Holy Redeemer Church in Clarksville, celebrated 50 years of priesthood at Subiaco Abbey.

“Being willing and able to serve” has been a guiding principle of his priestly life, he said.

In 1955, he became a student at Subiaco Academy. Upon his graduation, he was honored with the Pereyra Award for Unselfishness, a still highly respected award today.

“The fun of being in an environment where everybody was aiming for the same thing I was, I was in a minor seminary,” he said of what he enjoyed as a Subiaco student. “And so we learned very quickly how to get along with each other, to live in community.”

In 1960, he entered the novitiate at Subiaco and made his final vows as a monk Sept. 8, 1964. Father Wewers earned a bachelor’s degree in philosophy from St. Bernard College in Alabama and later a master’s degree in business education from the University of North Dakota.

Father Wewers wore several hats at the academy, including residential dean, a teacher for business, typing and religion courses and serving as athletic director from 1973 to 1999.

“The main thing was that the boys were able to compete, that was important thing. It’s true, winning isn’t everything, but it sure does help,” he said with a smile.

But a win for him was being able to guide young minds at the academy.

“Most of my students would probably say, ‘Father William was very, very direct. He called a spade a spade,’” he said. “When I meant no, I meant no. The boys in class would ask a question and the answer was no,” and when the boys would complain, soon came his famous line. “‘You don’t understand what no means. Not only no, but ‘blank’ no.’ They can fill in the blank.”

While the students respected his authority, the alumni always looked forward to their traditional reunion prank.

“The annual alumni thing was to take Father William’s van and push it down the hill in the middle of the night. I would get up the next morning and the vehicle would not be there.”

In 1999, Father Wewers became pastor at Holy Redeemer Church in Clarksville. He also served as pastor of Sts. Peter and Paul Church in Morrison Bluff until 2007.

“Being able to serve the community, taking care of their spiritual needs. It gives me an opportunity to serve in a different capacity than when I was at the academy,” he said. “… The years I’ve spent in Clarksville have been wonderful years, I’ve enjoyed it immensely.”

When Father Wewers is not serving the people, he’s cooking, working out in the yard or hunting squirrel, duck or goose.

But his greatest joy has always been what he was called to do 50 years ago — serve God.

“Being able to serve God’s people in whatever manner or position I’ve been able to do so in my life,” he said. “Whether that be in education or athletics or whether it’d be in pastoral work, it’s all been enjoyable. It’s all been rewarding.”