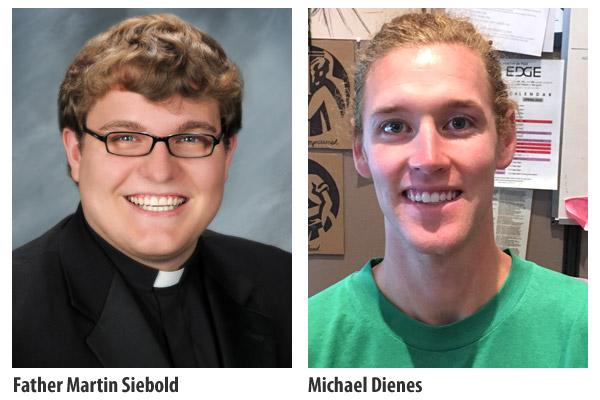 ROGERS — Social media has been dubbed the new “opiate of the masses” by some critics. But, because these are uncharted waters, there are, as yet, no conclusive studies on the long-term effects this technology will have on our culture, our society or even our children.

For the Baby Boomer generation and older, technology has been adopted into our lives, reluctantly by some and embraced by others. However, those younger are the digital natives who have only known life side-by-side with technology. The difference is that where once there was privacy and a sense of propriety, there is now an app to share every aspect and detail of ones existence. We can share where we live, where we are, whom we see and what we are doing with everyone.

But how much is really too much? Is there such a thing as over-sharing? Should we be having this conversation with our children? With ourselves?

I asked two young adults, Father Martin Siebold and Michael Dienes, to get their opinions on the subject. Father Siebold, 28, originally of North Little Rock, was just ordained in May and began serving as associate pastor at St. Vincent de Paul Church in Rogers in June. Michael Dienes, 26, is recently married and has served as a youth director, first in Indiana and then in Rogers at St. Vincent de Paul for more than three years.

• Do you think the amount of time individuals, specifically teens and young adults, spend on Instagram, Snapchat, Facebook or texting affects their relationships or ability to connect with people?

Siebold: Absolutely. Such means of social media were created to connect us with one another. This is a positive of social media. While I was in college I was able to keep in touch with people and let them know how I was doing and what I had been doing. This helped to facilitate my relationships, even though we were separated. But, a downside to overuse of such outlets of media can lead us to a different “status quo” of what the norms of relationships are. We can assume that social media is reality; whatever we read or see must be real. Many times I have been in a group of people whether at dinner or over at someone’s house and every single person there is on their phone (me included). We were with one another, but not present to each other. In this way social media can have a negative effect on how we connect and relate to people.

Dienes: It is undeniably true that the social media networks and, more generally any ‘screen time’ affects young people on a social and interactive standpoint. I have heard all sides of the argument whether it be “Social interactions always change and this is just the newest! The radio changed it once, the computer another time, this is no worse!” or “Social media is the bane of our existence; our kids our turning into robots.” Both shed light on a bit of truth.

• Besides the obvious topics of safety or job hunting, why else do you think giving out too much information could be too much?

Siebold: Somewhere along the evolution of technology we have lost sight of consequences for our actions. One classic example is the comment section of almost any YouTube video. Most people feel that there is a sense of anonymity to the Internet and they can be whoever they want to be with no consequences. A danger with this mentality that is instilled in our youth and our children leads them to seek affirmation through the outlet of the Internet, even through a false persona, i.e. videos games. Giving out too much personal information is the same kind of danger. There is an inherent good in wanting to share our lives with others, but when done through social media it can become narcissistic and egotistical.

Dienes: The need for followers and attention is also a well-known toxin that everyone seems to think only affects others.

• Why do you think dashing off a text, sending a selfie or edited picture is easier or preferable to some?

Siebold: As I said earlier, there becomes this need for affirmation, this desire to be desirable. The mindset becomes, “If I can convince others to perceive me a certain way that betters my image for the positive, then I will be happy and loved.” We need to help our youth and children learn that they are loved as they are. That God created them as his children, his sons and daughters and there is beauty in the truth, the truth of the Gospel.

• Is this a “runaway train” or can individuals make intentional changes in their social media use?

Siebold: I think the train has already left the station for society. But I believe we each have a personal decision to make, but that can only come once we have been well informed. Children are not to blame for these issues. They do what they see. Adults also struggle with this even more than some children. But once they can learn that there is a better way, and they must accept this as their own, not beat into them over their heads like sometime we can do with teachings, it can become part of their journey of conversion that we all need.

Dienes: Individuals have the ability to make changes for themselves but it is tricky. The social media, the late night scrolling, the binge watching shows, they have all reached addictive levels. So many young people are literally addicted to their screens. Plus, it is an accepted addiction! More often than not the idea of binging a particular media is encouraged rather than discouraged.

To eliminate screen time in this day and age takes courage and conviction. It doesn’t make it a bit easier that so often phones and computers are needed for work/school. So young people must learn to utilize their devices without becoming a slave to them.