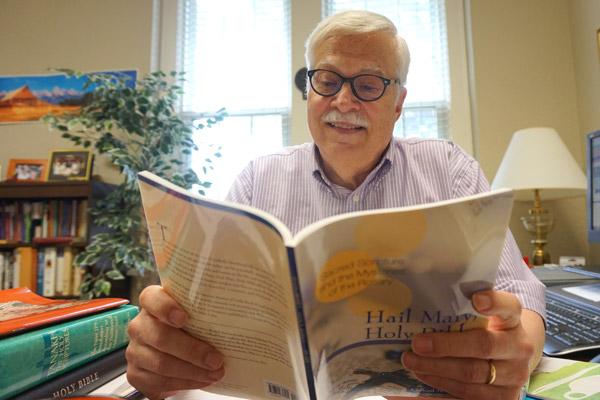 The Blessed Virgin Mary is the first disciple of Jesus and through the mysteries of the rosary Catholics delve deeper into the life of Jesus and a closer bond with Mary.

“The rosary is about Jesus. There are two mysteries that in particular are about Mary and they’re the ones we have almost no Biblical connection to, but they grow out of our understanding of Mary as the first disciple,” Yeary said. “As the first disciple, she’s also kind of an example of what the Church is, God’s love for the Church. We see that in how Mary has been glorified, that’s the glorification of God’s people.”

Little Rock Scripture Study has offered a study on the rosary for several years called “Touching the Mysteries,” but Yeary said it is based on shorter reflections whereas this study provides laity a chance to explore the rich Scriptural content that goes along with each story within the five mysteries of the rosary. Gospel writers have nuances when it comes to the stories of Jesus expressed in the joyful, luminous, sorrowful and glorious mysteries. For example, the chapter on Jesus’ crucifixion explores in part the people around Jesus during his crucifixion and his willingness to carry his cross.

Upchurch said Yeary has a “unique ability to help people appreciate the richness of Scripture.” She said the study should appeal to both people who are engaged in Scripture study and those that tend to gravitate more toward traditional prayer versus specific studies.

“The rosary is our traditional Catholic practice, a traditional form of prayer. Very often, people may not be aware that 90 percent of it is directly related to the Scriptures themselves,” she said.

The book is Yeary’s third and took about a year to research and write. Most of the writing was done in early 2016.

“It was Lent when I was working on the Passion narrative, the mysteries. I hadn’t gone into Lent that year with a real intensity, but then writing it, it wasn’t deliberately Ignatian, but it reminded me of Ignatian prayer where you imagine yourself in the story and then you become involved in the events itself. I found that the most moving thing of all in writing the book,” Yeary said.

Yeary, who converted to Catholicism 42 years ago in August, said the rosary has special meaning in his life. For any evangelical considering converting to Catholicism, there are “three big things” Yeary said that require the most work to understand: the pope, the real presence of Jesus in the Eucharist and moving past the suspicion that Catholics worship Mary, but understanding instead why the Church honors her. While attending Oral Roberts University in Tulsa, Okla., an evangelical fundamentalist school, a Protestant chaplain gave Yeary his first rosary and a book that emphasized the Scriptures of the rosary.

“The way he explained it and I think it’s really valid, is that Mary is for us and for Christian people the ultimate example of what it means to be a Christian. She’s the first disciple,” Yeary said. “It was really, really moving to me when Pope St. John Paul II added the luminous mysteries. Because at the same time he did that, he emphasized that in praying the rosary we should immerse ourselves in the Scriptures of the rosary and encourage people to do a Scriptural rosary.”

“Hail Mary, Holy Bible” and the study guide are available for $14.95 at littlerockscripture.org or litpress.org.