Former Memphis resident has love of Elvis and the Lord 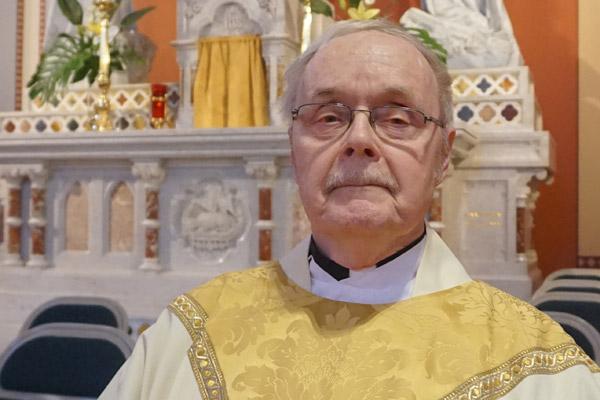 Aprille Hanson
Father Ed Graves was honored for 25 years of priestly ministry during the Jubilarian Mass at the Cathedral of St. Andrew in Little Rock June 27. Before his retirement, he served as pastor of St. Peter Church in Wynne.

Aprille Hanson
Father Ed Graves was honored for 25 years of priestly ministry during the Jubilarian Mass at the Cathedral of St. Andrew in Little Rock June 27. Before his retirement, he served as pastor of St. Peter Church in Wynne.

To save souls takes a little soul and for the past 15 years, Father Edwin “Ed” Graves has brought an Elvis-inspired spirituality to Mass.

“I bring all the kids forward after Communion and sing ‘Jesus is the rock and he rolls my blues away,’” which he heard once at a Come and See discernment retreat. “I say ‘this song was written by St. Peter, it says Jesus is the rock and Peter really insisted the refrain not be alleluia, but, uh huh huh,’” in a thick, deep Elvis voice.

It’s all a part of Father Graves alter ego “Elvis Priestly” that has been sharing the love of God through music with parishioners for the past 25 years, since his ordination June 20, 1992.

“I always felt like Elvis had a childlike spirit, a youthful spirit,” he said, adding he saw him five times in concert and met him briefly outside of Graceland. “His spirit just influenced me an awful lot and … I never saw a conflict between that and serious Church music.”

Before his retirement in 2011, he served as a pastor in Wynne and McCrory and since fills in when needed at area parishes.

“When I sing those songs, I’m singing it with joy, but I’m singing it also because I really care for the people,” he said, adding that though he loves Elvis, it’s always been more about connecting with parishioners and leading them to God. “It connects so much with people and their spiritual life so well.”

Father Graves’ discernment to the priesthood has at times been as lively as cutting a rug in blue suede shoes and as lonely as checking into the heartbreak hotel. Born Jan. 2, 1941, he grew up in Jacksonville, Fla., and later moved to Memphis, faithfully attending Mass each week and saying the rosary together as a family. On a retreat with Trappist monks at the Monastery of the Holy Spirit in Conyers, Ga., during his senior year of high school, he saw Jesus.

“All of the sudden the presence of Jesus showed before me, I looked up a little bit, it was like he was right there,” Father Graves said. “‘I know you died for me, I’ll give you my life.’ … When I had this experience it just changed me. It was like, ‘Yeah, he’s alive and he’s with me.’”

After two years of college, he became a Camaldolese monk in Big Sur, Calif.

“I was just drawn to contemplative prayer. It was just right for me at that time,” Father Graves said.

But his love of music and people never faded, despite a more secluded lifestyle.

“When I was out at the monastery, we didn’t get together a lot. I was in the hermitage and I’d sing ‘Heartbreak Hotel’ to myself and listen to Beethoven records.”

After about five years, he got the blessing of his superior to take a sabbatical, but he did not return. Father Graves earned bachelor’s and master’s degrees in art and worked as a commercial artist for 13 years creating display art.

“I just wanted to serve God with all I had and my art provided me somewhat with the ability to pray more, keep my mind focused on prayer. Like Paul made tents, I painted pictures,” he laughed.

Father Graves discovered the Charismatic Renewal movement, which he said was “crucial” in God leading him to the priesthood.

“My whole spirituality became charismatic, in the sense that I’d be saying Mass and would receive a word from God and I’d incorporate it while preaching,” he said.

“I developed a real love for people,” he said. “… It’s just so natural to kid around with people when you’re a pastor,” in between the serious moments.

For the past five years, he’s lived at St. John Manor in Little Rock and has stayed busy painting expressive art, writing poetry and working on a novel.