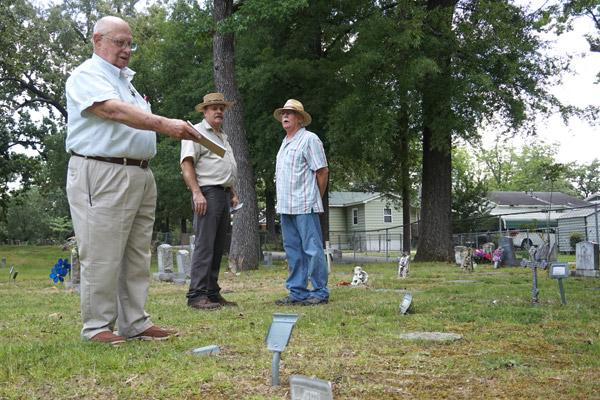 As Rusty Blaty, a parishioner at Holy Redeemer Church in Clarksville, was visiting the graves of relatives buried at Calvary Cemetery in Little Rock last fall, he was drawn to the piece of earth that had a scarce amount of headstones. He walked over and realized there were only temporary grave markers — nothing in stone, nothing that would last.

Then he realized they were the graves of babies.

“It’s pretty simple … God says do something about it and that’s the end of the story. He taps you on the shoulder sometimes,” Blaty said.

While Blaty admits he’s not exactly sure why this weighed on his heart, what has resulted is $3,000 donated to Calvary Cemetery by the Knights of Columbus Council in Clarksville to start providing headstones for the 169 known unmarked graves of babies in what he hopes is the first step to right this wrong.

“The Knights of Columbus council in Clarksville. … saw this and they determined themselves to donate $3,000 for this project in hopes that other people would contribute after we did,” he said.

A check was presented to Mike Cagle, cemetery superintendent, June 13 by Blaty and Bill Crosby, grand knight for the Clarksville council.

“Who’s going to look after them if somebody don’t pick up and run with it?” Crosby said. “It hurt in some ways to think that this is what we’ve come to and that we had not helped a long time ago … If that don’t tug at you and get you thinking straight, I don’t know what would. It got to the very core of myself.”

Other religious groups have made sure the children who have been aborted have a headstone, which Blaty pointed out is needed, but “the children that were wanted were not represented.”

“It was an overlook in life,” Blaty said. “Just the sadness that the people that had those children probably at the time couldn’t do anything about” buying a headstone.

Cagle said there’s a variety of reasons a child’s grave may be left without a headstone, but most often, parents or relatives lack the money to pay for it.

“A lot of times when people are having kids they’re young, just starting in life, they have a child and so many other things going on in life they don’t have the time and money to do a marker,” he said.

The headstones will list what is stated in the cemetery records, which sometimes may just include a last name and year of death.

Cagle said he is working with a local monument company that has offered to charge $55 per headstone, not including tax.

At the end of July, Cagle said he’ll begin ordering the headstones to mark the oldest graves first. The years of known unmarked baby graves stretch from around the 1940s to this year.

“We’re going to mark graves that have been unmarked for 60, 70, 80 years and maybe they won’t be lost,” he said. “Babies, they touch you a little different than an adult. When you’re an adult you live your life and die, that’s a normal way of life, that’s how it goes. With a baby it’s a little bit closer to you. They didn’t get to live the life that you did.”

In his experience, if a grave goes unmarked for at least five years, chances are it will not get a headstone, Cagle said. For now, the $3,000 may cover up to the 1960s, depending on headstone prices. If more money is donated and headstones are able to be placed on newer graves, Cagle said giving the families about 10 years to mark the grave themselves would be fair.

“We’re a long ways to getting to mark those graves,” Cagle said. “… The ones that are most recent, these people might get a little stability in their life and can financially afford it.”

Blaty said he hopes to never see an unmarked grave for a child again at Calvary and that “all the parishes in the state embrace this.”

“I just think as a Christian community, almost all cultures honor their dead in some way and somehow our most important aspects got skipped,” he said.

To contribute for headstones, send a check to Calvary Cemetery, Diocese of Little Rock, 2500 North Tyler Street, Little Rock, AR, 72207 and note that the donation is to purchase headstones.

Pine Bluff pregnancy center on the move with mobile unit