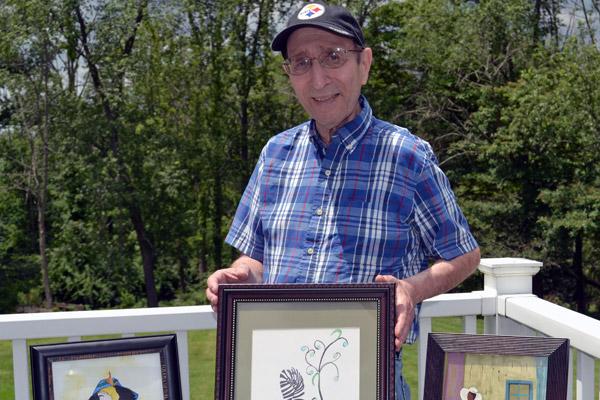 Courtesy Esposito family
Father Ralph Esposito, retired pastor of St. Michael Church in Van Buren, stands with some of his watercolor paintings at his home in New Castle, Pa. He celebrated 50 years of ordination May 13.

Courtesy Esposito family
Father Ralph Esposito, retired pastor of St. Michael Church in Van Buren, stands with some of his watercolor paintings at his home in New Castle, Pa. He celebrated 50 years of ordination May 13.

Little Ralph Esposito had to know the reason behind everything.

“I was kind of like the rebel in the family too. I was always the one who would ask ‘Why?’ when my parents told me something to do,” he said with a laugh.

But Father Ralph Esposito didn’t have to seek out the reason why he was called to the priesthood by God. He simply had to follow and has for the past 50 years.

Father Esposito, 76, who served at several Arkansas parishes, is celebrating the anniversary of his ordination, May 13, 1967.

Today, Father Esposito lives in retirement in his hometown of New Castle, Pa., where he grew up as a twin in a family of four children, descended from Italian immigrants.

“When I was younger I used to play priest all the time. I’d set up an altar, dress up and tell grandfather to come over for Mass. He would,” Father Esposito laughed.

As a teenager, he would go with the priests to visit the sick and gained wisdom from the nuns teaching religious education classes.

“I used to go past the church and just walk in. I would just sit in there for hours, hoping God would just speak to me. He didn’t always,” he said. “You know what though? I always felt kind of a really comforting presence.”

When Bishop Vincent Leonard, a good friend of then-Bishop Andrew J. McDonald of Little Rock, asked if any priests wanted to serve in Arkansas, he listened.

“I raised my hand. The short of it was the church in Pittsburgh at that time was heavily clerical priests, in the rectory all the time expecting people to come to them. That wasn’t my idea, I was too outgoing,” he said.

He came to Arkansas in 1978 and served at several parishes in Hot Springs, Newport, Batesville, Cherokee Village, Horseshoe Bend, Little Rock and nine years at St. Michael Church in Van Buren, which he called “a gem.”

“That church was very unique. At one time I had three deacons. I had never experienced the diaconate at all until I came to Arkansas … I felt that the parish was not a parish without deacons,” he said. “I was very much down to earth.”

In 2000, Father Esposito was diagnosed with cancer of the esophagus and a nine-month journey that included surgeries, complications of pneumonia and a lot of pain put him on the brink of death.

“I could just feel the prayers coming from people; not just my parish but everywhere,” he said.

Father Esposito returned to St. Michael but retired May 15, 2002, and went back to New Castle to care for his aging parents in 2005.

Aside from high blood pressure and a recent hernia operation, he has been healthy since 2001.

Today, his passions are watercolor paintings, writing and spending time with his four cats — two of which, Brother and Sister, he found abandoned in a basket while in Arkansas — and his Chorkie — a Yorkie-Chihuahua mix — named Muffin.

“When I look at animals it’s like there’s something looking back at me and it’s way beyond them and way beyond me,” he said of seeing Christ in animals.

Father Esposito is currently writing a devotional, “Oh God, Where Were You When I Needed You,” that will be available on Amazon.

Identifying with St. Joseph and Nicodemus, who he feels were “somewhat afraid to be that close to God,” his retirement has given him time to grow in faith.

“It’s uncanny, almost 3 o’clock every morning I wake up and listen to God. It’s real quiet and I kind of talk things over with him,” Father Esposito said. “I think this is my time of learning a lot more. Things I should have learned and never learned. And now God has given me this time in my old age.”