Father Richard Walz known for his music and Monk Sauce 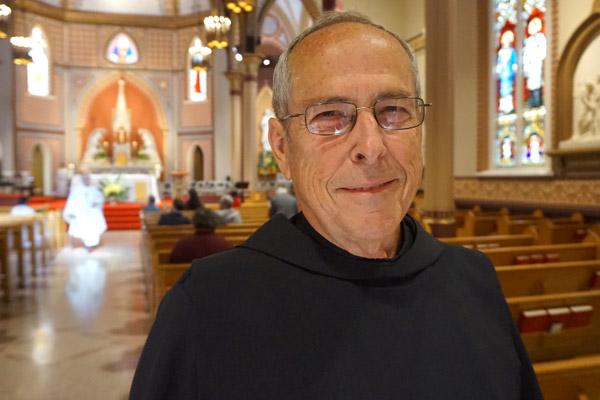 Aprille Hanson
Father Richard Walz, known for bringing the “Monk Sauce” recipe to Subiaco Abbey, was honored for 50 years of priesthood during the Jubilarian Mass at the Cathedral of St. Andrew in Little Rock June 27.

Aprille Hanson
Father Richard Walz, known for bringing the “Monk Sauce” recipe to Subiaco Abbey, was honored for 50 years of priesthood during the Jubilarian Mass at the Cathedral of St. Andrew in Little Rock June 27.

Growing up in a family of six on a dairy farm in Poplar Bluff, Mo., James Raymond Walz quickly learned the value of hard work and working together.

“We actually milked cows and grew a lot of vegetables because my dad sold milk house to house,” he said. “… As soon as you could walk you got a job.”

That sense of responsibility and faith he said was good preparation for becoming a Benedictine monk. Father Richard Walz, OSB, professed his final vows at Subiaco Abbey on Sept. 8, 1964. But Father Walz knew he also had a calling to the priesthood and was ordained 50 years ago, May 27, 1967, at his home parish, Sacred Heart Church in Poplar Bluff. He has served as director of monastic formation for seven years at Subiaco Abbey and is the man behind the Abbey’s famous spicy Monk Sauce and Abbey Brittle.

“I can never remember ever wanting to do anything else but be a priest,” he said. “… I am happily a priest monk.”

Though Father Walz wanted to enter a seminary, his family could not afford it. Their family doctor, a Catholic in Altus, had a son attending Subiaco Academy.

“He told the vocation director at Subiaco, ‘I know a boy in Poplar Bluff that wants to be a priest.’ So they came looking for me,” he said, enrolling in 1955.

In 1960, Father Walz entered the novitiate at Subiaco Abbey and later went on to earn a bachelor’s degree in philosophy and a master’s degree in library science. At Subiaco Abbey, he taught religion, art appreciation and assisted with the choir.

“I have told people as far as I am concerned you don’t have to be practicing for some big to-do in order to sing. I just enjoy singing,” he said.

For five summers, he had advanced studies in music at Loyola University in New Orleans. It was there he practiced on “about every instrument I could get my hands on.”

“We’d go down in the deep dungeons part of the music school there and we’d sing 16-part madrigals,” Father Walz said. “It was just fun.”

He shifted his focus in 1975 when he was appointed to serve as prior of Subiaco Abbey’s Santa Familia (Holy Family) Monastery in Belize. Aside from a one-year sabbatical back at Subiaco, Father Walz served in Central America for 27 years. While in Belize, he oversaw the completion of the Santa Familia’s retreat house, taught religion and music and led retreat and vocation discernment programs.

“I think I could say without being boastful that I can do a good job … of leading a congregation with a song, with a guitar. I felt very comfortable in that,” he said while he was in Belize.

A highlight for him was when St. John Paul II visited Belize in March 1983.

“I was one of the people presented to the pope as a superior of the Benedictines … I’ll tell you it was a very, very emotional and big thing for Belize because Belize is a little country,” Father Walz said.

The pope was there about five hours, celebrating Mass on the tarmac of the small airport. “Concelebrating Mass with the pope there, being one of the people that helped distribute Communion, it was an emotional thing for the country and for all of us that participated in it.”

He became a Belize citizen in 1993. When the monastery was given to the Diocese of Belize City on Jan. 1, 2003, Father Walz returned to Subiaco, but his spiritual legacy remained. In 2005, a park was dedicated in his honor.

When he returned to Arkansas, he was the assistant and then director of development for the abbey and academy.

But luckily for Catholics in Arkansas, he brought more than just memories back from Belize. He brought pepper seeds he grew in Belize, what he believes is a form of Habanero pepper, but different than any he’s tried in the United States. It’s the secret to the popular Monk Sauce, hot sauce made at Subiaco. Father Walz also leads the production of Abbey Brittle.