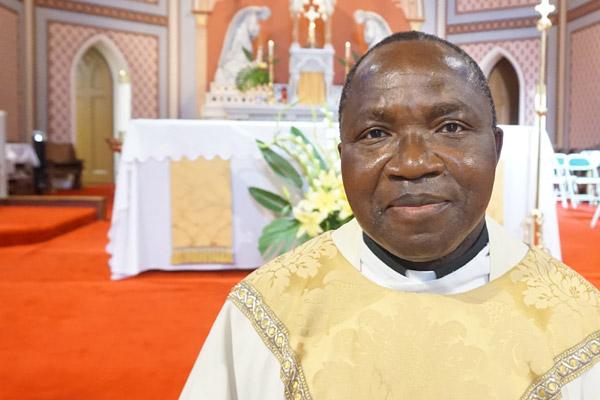 Aprille Hanson
Father Benoit Mukamba, CSSp, pastor at St. Mary Church in Helena and four other parishes, was honored for 25 years of priesthood during the June 27 Jubilarian Mass at the Cathedral of St. Andrew in Little Rock.

Aprille Hanson
Father Benoit Mukamba, CSSp, pastor at St. Mary Church in Helena and four other parishes, was honored for 25 years of priesthood during the June 27 Jubilarian Mass at the Cathedral of St. Andrew in Little Rock.

When Benoit Mukamba was growing up in the Mashasha Village in what is now Democratic Republic of the Congo, his older brother Athanase built a Catholic church in a small hut. He became a catechist to assist the Spiritan priests from Belgium who would travel to the remote village, often without the luxury of roads, about three times a year. In between those visits, his brother taught religion.

“His unquestionable dedication to his church,” inspired a young Benoit, he said.

Seeing these acts of selflessness and a series of other faith-filled events led Father Mukamba, CSSp, to the priesthood. He was ordained July 5, 1992, at St. Michael Church in the Diocese of Kongolo. He is currently the pastor of St. Mary Church in Helena, St. Andrew Church in Marianna, St. Francis of Assisi Church in Forrest City, St. John the Baptist Church in Brinkley and St. Mary of the Lake Church in Horseshoe Lake.

“I enjoy the love of the people … being close to them is the most enjoyable part of my life,” Father Mukamba, 54, said.

Father Mukamba was born in 1963, one of eight children, during the Congo Crisis in what is now the Democratic Republic of the Congo.

“My parents retreated to their ancestral village where it was peaceful until … the war, turbulence, started entering the village,” he said.

In the middle of the night, his father told his mother “get up, get the children and get going,” out of Mukumu village to the more secluded Mashasha village about 20 miles away off the main road.

“That was my experience of war — running and leaving my father behind,” he said. “I remember myself on the shoulders of my oldest brother.”

His father later joined them and became chief of the village.

“People were occupied with cultivating the land, during the summer there would be hunting,” Father Mukamba said. “… We went to church every Sunday; we went to the Catholic school. We waited for the priest whenever he came to visit three times a year.”

After his father’s death from illness when he was in fifth grade, the family moved to Kongolo. In high school, he studied chemistry and biology and had dreams of being a doctor. However, during Mass one day, a homily caught his attention.

“What good does it do to win the whole world and lose one’s own life?” the monsignor posed to congregants. “It became the question of my searching.”

He never forgot the sacrifices of those Belgian priests, part of the Congregation of the Holy Ghost Fathers, who visited his village.

He entered seminary in 1983 to become a Spiritan priest. After his ordination, he served as an associate pastor and eventually as vocations director for the Spiritans, as well as formator and bursar at the Spiritan Theologate in Nairobi. During his tenure, more men wanted to become priests than there was room.

In 2000, Father Mukamba was called to serve at St. Benedict the Abbott Parish in Houston, Texas, where immigrants were coming from places like Mexico and Honduras.

In 2010, Father Mukamba came to Arkansas to serve in five small parishes in the North Delta deanery. On any given week, he’ll travel more than 400 miles across Phillips, Monroe, Lee, St. Francis and Crittenden counties.

“What is exciting to me about these very few (parishioners) they look like where my life began. The church my brother began, there were 10 people … This place here makes me feel like I’m paying off what the Belgian Fathers, the French Fathers did for my people.”

One of the most spiritually fulfilling parts of his priesthood has been celebrating funeral Masses.

“It makes me realize the temporality of our human reality. That’s the goodness of the Lord, the assurances of eternal life,” he said.

Though his life is busy, he knows the path he followed is what God set out for him.

“The Lord has been so good to me, has been so patient with me in the ups and downs,” he said.