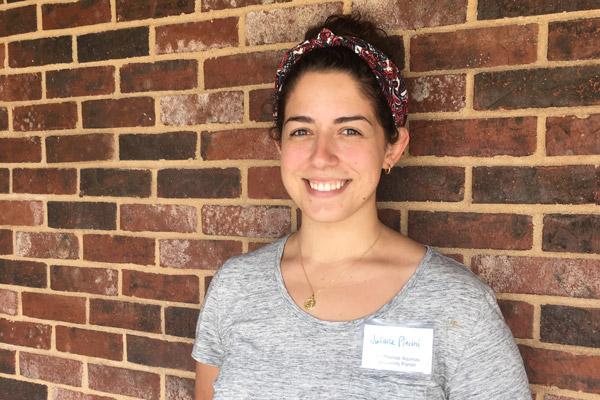 Now, in her second year as a campus minister at St. Thomas Aquinas University Parish at the University of Arkansas in Fayetteville, Pierini, 25, hopes to bring college students closer to Christ in much the same way.

After graduating from UCA in December 2014, Pierini accepted a 12-month position in 2015 with Boys Hope, Girls Hope International in Pittsburgh as an academic success coordinator with the Girls Hope division. From January to March 2016, she arranged an au pair position in Zaragoza, Spain.

She returned to Arkansas and began a 9-to-5 job, but when hearing about the opening of the campus minister position, she felt the nudge to apply.

“Being in this position, kick-started my own faith life after graduating from college and brought me some peace,” said the former parishioner of Christ the King in Little Rock.

Although her first year on the job had an equal measure of rewards and challenges, that peace and learning to follow that gentle nudging of the Holy Spirit is something she hopes to share with other young people searching for their faith while studying on campus.

An avid believer in peer-to-peer ministry, her goal is to get to know the students personally and learn about their interests.

“Every year is a new beginning, a chance to revamp our efforts in reaching the students and to help each individual go deeper in their faith,” she said.

• If you could be any saint, who would it be?

“I’d pick St. John Bosco. I became inspired by his mission to care for children who had no one else and educate them to where they could later provide for themselves and love Jesus. He was an early pioneer of social justice.”

Click for the 15 Catholic young adults who inspire us, 2017 index