‘Our light, our sweetness and our hope’ 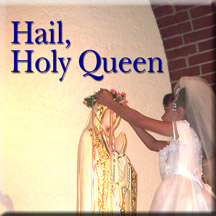 Chosen by God above all other women, the Blessed Virgin Mary's faith and obedience paved the way for the Incarnation.

The Catechism of the Catholic Church defines her unique role as being honored above all other saints, including the Apostles. She is the Mother of God and the Mother of the Church.

Mary is mentioned in both the Apostles' and Nicene creeds. In the Mass she is included in the Eucharistic Prayer and referred to in some forms of the penitential rite. Of the Church's holy days of obligation, three are dedicated to her.

Our Lady has appeared to the faithful to bring hope and give warnings to turn away from sin. She gave us the Miraculous Medal, the rosary and the scapular.

The Blessed Mother has been depicted in statues, icons, sculptures and paintings. To honor her, prayers, songs and poems have been written, devotions practiced, shrines dedicated and flowers named.

Mary said all generations would call her blessed -- not for her deeds -- but because of the "greatness of the Lord." (Luke 1:46-48) In the end, those devoted to her are always led to her Son. For her wise counsel tells us, "Do whatever he tells you." (John 2:5)

Click on a headline below to read all the stories from Arkansas Catholic's May 20, 2006, special section on the Virgin Mary.

Titles for Virgin Mary are numerous as well as universal

Catholics do not worship Mary

A garden of Mary's flowers

Resources to learn more about the Virgin Mary