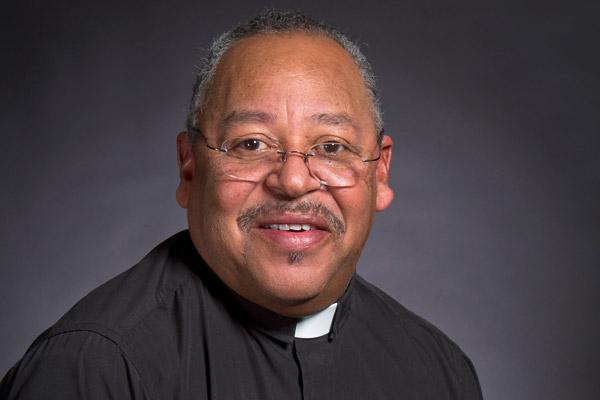 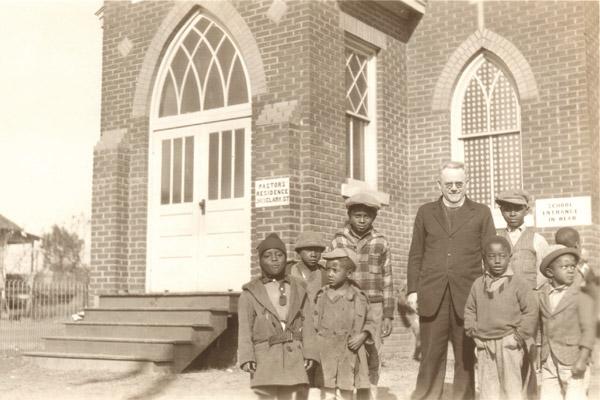 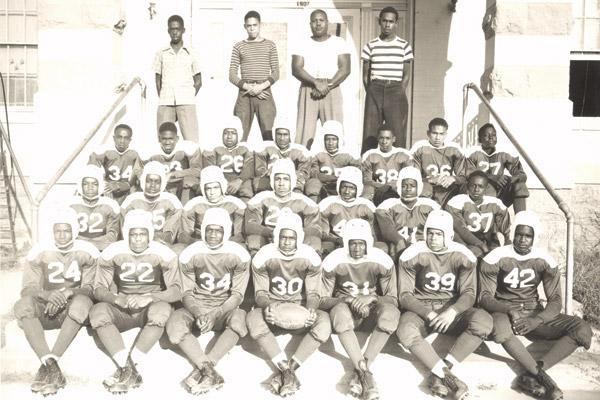 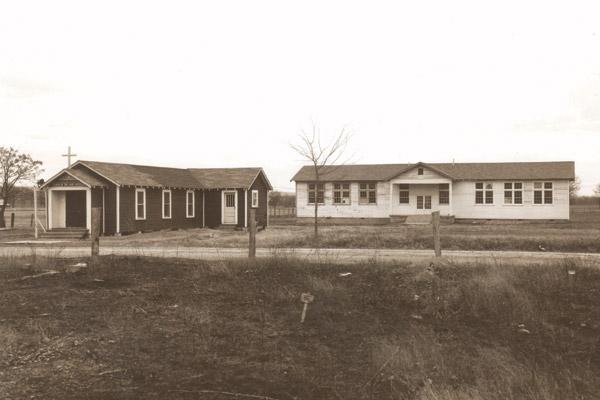 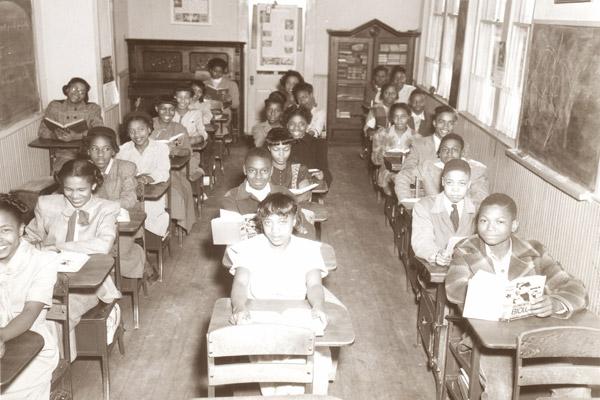 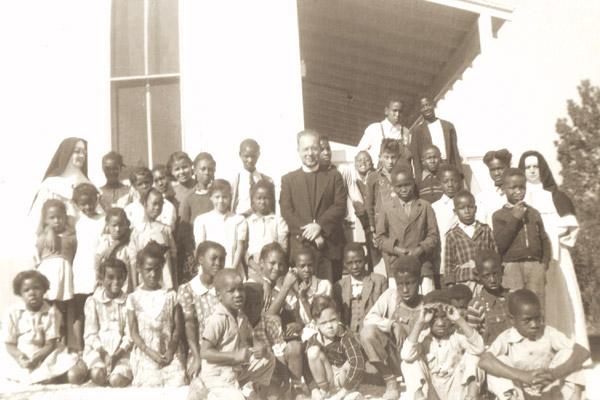 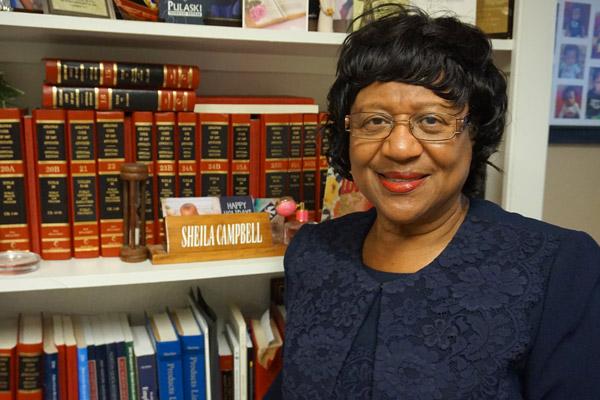 Aprille Hanson
“The nuns had very high aspirations for us. I think that the nuns were dedicated to make sure we got a good education ... They made it clear as colored students we had to apply ourselves more and there was going to be a different expectation for us.” Sheila Campbell, now an attorney, attended St. Augustine School in North Little Rock and Mount St. Mary Academy in Little Rock.

Aprille Hanson
“The nuns had very high aspirations for us. I think that the nuns were dedicated to make sure we got a good education ... They made it clear as colored students we had to apply ourselves more and there was going to be a different expectation for us.” Sheila Campbell, now an attorney, attended St. Augustine School in North Little Rock and Mount St. Mary Academy in Little Rock.

Most black Catholic schools closed by the 1970s

On Sept. 4, 1957, as nine black students walked past crowds of hostile white protesters to try and enter Central High School in Little Rock, students in black Catholic schools were busy with their studies, many unaware of the historic step for civil rights unfolding in their own state, their own city.

The 1950s and ’60s were plagued with racism, but in the black Catholic school system, students were treated with respect.

Sheila Campbell, 65, a parishioner at St. Augustine Church in North Little Rock, who attended St. Bartholomew School in kindergarten before going to St. Augustine until eighth grade in the 1950s, said, “The nuns had very high aspirations for us. I think that the nuns were dedicated to make sure we got a good education particularly in the areas of math, English, reading, that was stressed. When I went to Mount St. Mary (Academy) I was prepared to compete with the other students. They made it clear as colored students we had to apply ourselves more and there was going to be a different expectation for us.”

This year marks 60 years since the Central High Crisis, when the National Guard was ordered by Gov. Orval Faubus to prevent the integration of schools as ordered by the U.S. Supreme Court. On Sept. 25, the black students, known as the "Little Rock Nine," were officially let into Central with U.S. Army escorts. Though it was a dark time consumed by hate, Catholic sisters made sure black students received a strong education, faith and self-respect that many hold dear to this day.

In Arkansas, black Catholic schools were established in the 1800s and flourished in the first half of the 20th century (see sidebar).

“First of all, it was a mission of the Church,” said Vernell Bowen, superintendent of Catholic schools. “… They were not receiving an equal education so I think the religious who came really took that on as a mission which is what the Catholic Church needs to be doing even today — reaching out on the fringes, providing what we can, a good quality education.”

The Olivetan Benedictine sisters of Holy Angels Convent in Jonesboro came to Pocahontas in 1887 and established a black school in 1888, according to a 1912 article in The Southern Guardian. According to information unearthed in recent years from a roll call log in the rectory at St. Paul Church in Pocahontas, the school stayed open until 1909, with seven students enrolled, said Sister Mary Anne Nuce, OSB.

“It was a different culture so it may not have even crossed their mind because their skin was darker they wouldn’t go to school,” said Sister Mary Clare Bezner, OSB, of the founding sisters from Switzerland. “They loved all people it didn’t matter race, ethnicity, they were children of God.”

Father Warren Harvey, 63, the diocese’s first and only black priest, grew up in Conway with 13 brothers and sisters. The children attended Good Shepherd School, founded in the late 1940s.

“The thing that the Church always wanted to do even though they did not advocate integration that much, they still advocated education,” Father Harvey said. “The Church has always been an organization that says we’ve got to help y’all … if we can’t educate you in our schools, then we’ll build a school for you.”

Sister Maria Goretti DeAngeli, OSB, prioress of St. Scholastica Monastery in Fort Smith, taught three years at Good Shepherd and three at another black Catholic school, St. John the Baptist School in Fort Smith, in the 1960s. Father Harvey was one of her third-grade students.

“We had a good school; I think our kids did well. We had the same books they had over at St. Joseph,” the white school at the time, Sister Maria said.

As with all Catholic schools today, spirituality was just as important as academics, even if the majority of students were not Catholic.

“Every afternoon we’d pray the rosary before the end of school. I remember having huge prints on the wall of the mysteries of the rosary,” Father Harvey said. “… Catholic education gave you not only the intellectual development that’s needed, but alongside that was a spiritual development.”

“We’d catch the bus and going past us we could see what was going on. I could see the troops and the crowds around Central and everything,” Fred Smith said and while attending St. Bartholomew in 11th grade, “I can remember the teacher giving a worldwide view of what was going on and, of course, Central would come up.”

John Gillam, 71, attended St. Bartholomew throughout elementary and high school, except for his junior year at Catholic High School. Because Central High was close, “it rolled over to the neighborhood the school was in. The nuns wanted to make sure we didn’t get involved” and made sure they stayed safely in the school, he said.

Laurel Hooks, 65, was only able to attend St. Augustine School in North Little Rock in the first grade before her family moved to Eudora.

“There was no prejudice there at all. All the nuns were very attentive. When you went to school you learned, you really learned. They taught us well,” Hooks said. She finished her education in black public schools and went on to serve about 30 years in the military.

While students were never pressured to convert, some, like Ed Gilyard’s family, joined the Church when their children attended St. John the Baptist School in Fort Smith. Gilyard’s daughter Carmelita Adams, one of seven children, started attending St. John as a fifth grader in 1950. She had previously attended a black public school in her neighborhood, but when her mother saw the care and attention the sisters took providing music lessons to her cousin, she switched schools.

“She just thought she wanted to give her children, as she called it, a better education so she started investigating the Catholic school,” Adams, 76, said. “Once we started taking Catechism, my dad would have to help us with homework. At that point he got real interested in the Catholic religion.”

Adams attended the school until eighth grade and said the Benedictine sisters from St. Scholastica were “kind, very strict women.”

“We enjoyed going to Mass and just being part of that Catholic community,” she said. “They made us feel important as children and important as part of the Catholic family.”

The differences of black and white were never emphasized.

“At the time when I was going to the Catholic schools we had to ride the bus it was always an understood thing — you gave your man the money and went to the back of the bus,” she said.

Despite racial tensions brewing throughout the South, students at many of the black Catholic schools were deliberately shielded from the hatred. The focus was never about the color of a person’s skin, but rather, love for God, people and self.

Sheila Campbell said her father attended St. Augustine in first grade the year the school opened in 1929. When she attended, the school was taught by the Sisters of Christian Charity based out of Illinois and the white nuns never talked about race. Her parents also made it a point to avoid downtown Little Rock where there were separate water fountains for blacks and whites.

“I had a good self-image of myself, which is more important than anything,” she said.

However, racism was front and center her first day at MSM, an integrated school.

“The first day I went to Mount St. Mary’s I did not know I was black. The first day I cut myself on the desk accidentally and a nun said, ‘That’s why we didn’t want you people here because you’re trouble makers.’” She ran out of the school crying to her mother, who told her, “‘There’s no place in America for a weak black person. Don’t be weak.’ I knew from then I couldn’t be weak ... I always made sure I made the honor roll. I was going to show her whatever she thought of me was not correct.”

Carmelita Adams said as a whole, integration to St. Scholastica was not as tumultuous as Central High.

“I do remember reading in the paper about the Little Rock school and I always kind of felt bad for the kids because of the negative things they’d hear,” she said. “Then I thought it was never going to change until somebody takes a stand and obviously those kids and the parents did.”

Despite the distance from Central, it was a different experience in Fort Smith after 1957.

“When you got on the bus they’d say negative things to you and you know what the negative thing was,” she said. “As a child, as a young person, I became more aware of the differences between black and white” as society viewed them.

“I encourage every black Catholic church have a strong religious education program, both for kids and for adults. That is so important. I’m not saying reinvent the wheel. Take advantage of what the diocese offers. Don’t sit back and say, ‘Well there won’t be any black people there,’” at a diocesan event, he said. “Go, you’ve got to go for it.”

Fred Smith earned a bachelor’s degree in history and later a master’s in social work. He taught three years, then worked as a city planner in Cincinnati and finished his career as a state auditor in Arkansas for 26 years.

“I think it prepared me to go on to college,” Smith said of his Catholic education and “how to treat other people.”

After graduating from St. Scholastica in 1958, Carmelita Adams, a parishioner at Immaculate Conception in Fort Smith, went on to graduate from what is now Avila University in Kansas City, earning a nursing degree. She worked in various positions in nursing for 48 years before her 2011 retirement.

“I think it made me more accessible of people and situations,” she said of her Catholic education. “I learned to deal with those issues as they came up. I think it really made me a stronger person.”

Sheila Campbell graduated from MSM in 1970 and went on to earn her master’s and a law degree and has been in private practice for 35 years. She said the morals and values established early on at St. Augustine School are something she’s never forgotten.

“The respect you have for yourself and other people was engrained in you from a very young age. You take that with you and carry it with you the rest of your life,” Campbell said.

Most black Catholic schools closed by the 1970s