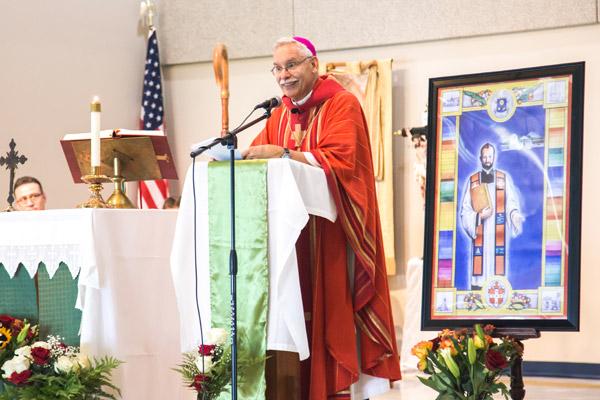 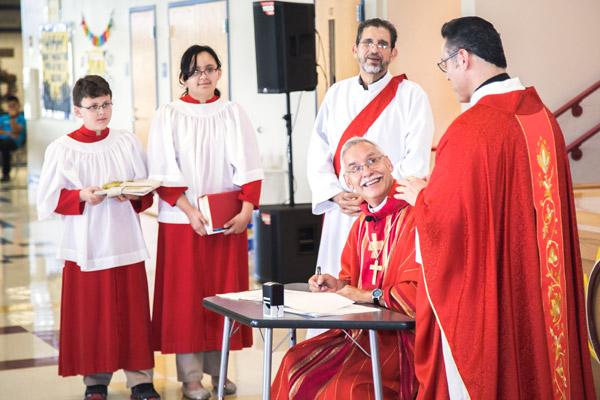 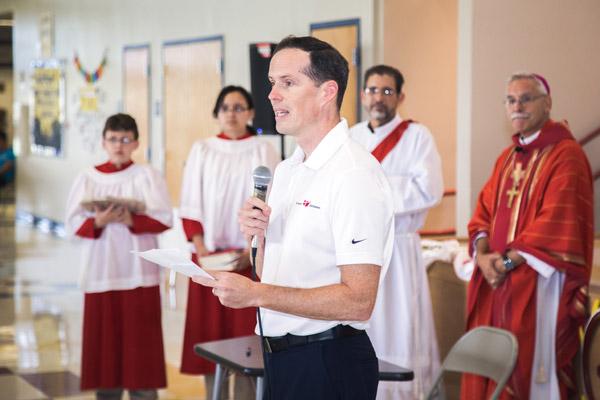 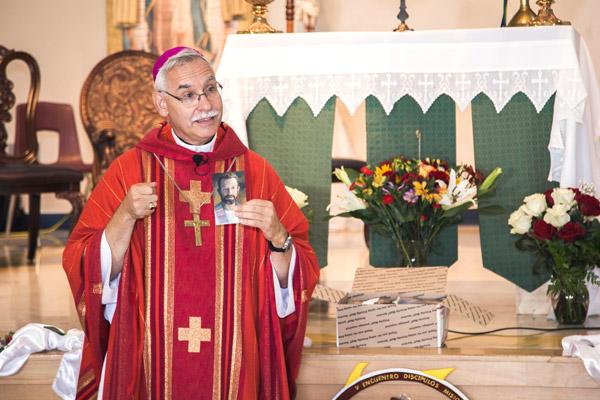 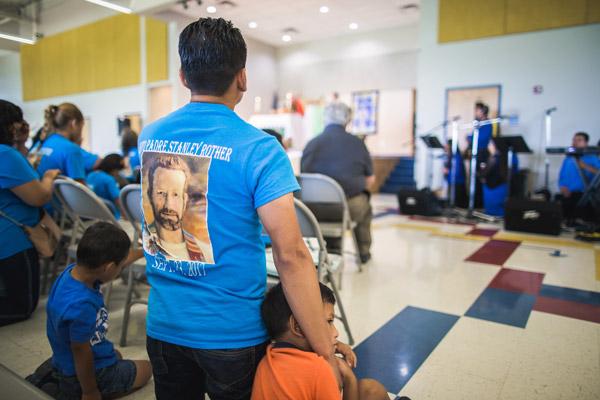 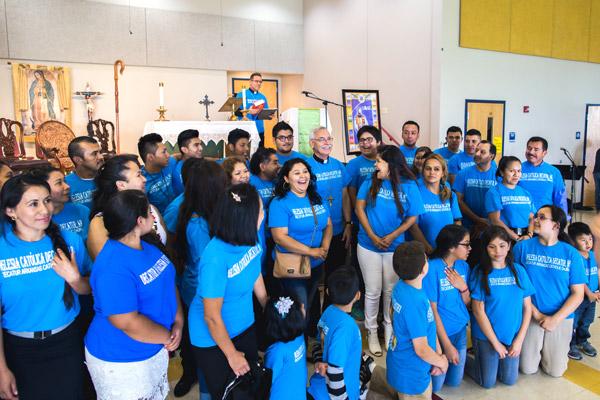 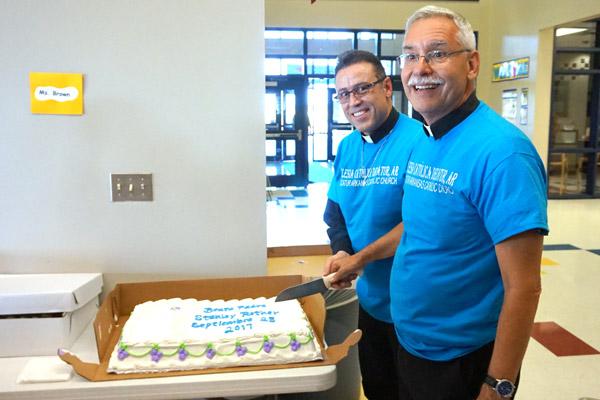 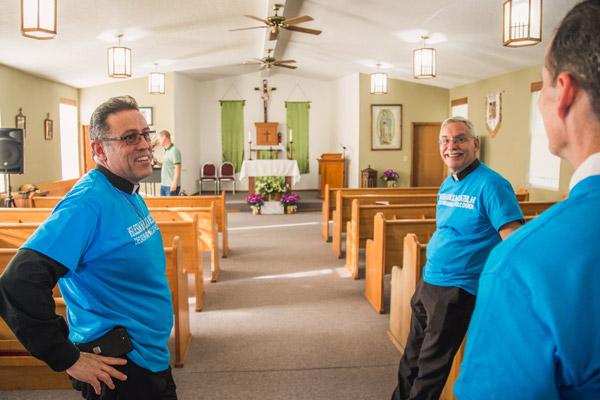 Decatur Catholic community made up of immigrants from Guatemala, El Salvador, Mexico 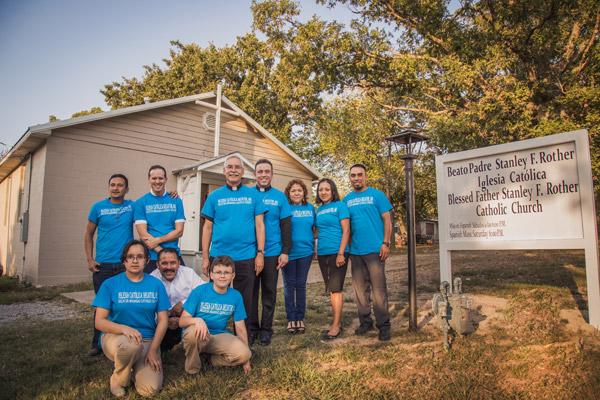 DECATUR -- The naming of Blessed Stanley Rother Mission in Decatur, the first Catholic church in the world to be named for the beatified martyr, was not just historic, but personal for the roughly 80 parishioners made up of immigrants from Guatemala, El Salvador and Mexico.

“This is something very special … that is the will of God,” said Guatemalan Aroldo Batres, a married father of five. “To me, the kind of love he feels for our people is the love of God. It makes me feel special.”

The Mass was held at the Decatur Elementary School to allow for more seating. T-shirts with Blessed Rother’s image emblazoned on the back were worn by many parishioners, along with broad smiles as Bishop Taylor commended the community on their “commitment to Jesus Christ and the initiative you have taken to live your Catholic faith in a place where previously there had been very few Catholics.”

“To me, the kind of love he feels for our people is the love of God. It makes me feel special.” Aroldo Batres, a native of Guatemala

“Everything I know about Blessed Stanley tells me that he would be delighted to have you as the first community in the world named after him,” Bishop Taylor said during his homily.

Blessed Stanley Rother, a native of Okarche, Okla., was beatified Sept. 23 at the Cox Convention Center in Oklahoma City.

The more humble gathering in the small town of Decatur with parishioners described by pastor Father Salvador Marquez-Munoz as a “hardworking people,” captured the spirit of Blessed Rother, a farm boy who courageously served his flock in Guatemala until his martyrdom. He was shot in the head in his Santiago Atitlán parish rectory on July 28, 1981, at age 46.

Before the Mass, Bishop Taylor gave a presentation in Spanish on the life, ministry and death of Blessed Rother. Prayer cards were handed out of Blessed Rother that included a third-class relic. A dinner was served after Mass.

Jose Zamora, who immigrated to the United States from El Salvador in 1986, said he was crying during the beatification. He remembers vividly when the government was “killing everybody,” in El Salvador, similar to the unrest in Guatemala.

“When I was hearing about his story, in El Salvador we saw catechists disappear, our priests were crying. It was familiar. We know what he went through,” Zamora said.

Cousins Raul and Sebastian Mejia, natives of Guatemala, said the courage of Blessed Rother inspires them.

“What inspired me is how he stood up for the people … He was not afraid to give a testimony for Christ and his Church,” said 21-year-old Raul.

Decatur’s Catholic community held their first official Mass March 25, 2014, with Father Marquez-Munoz. The community has grown to about 60 to 80 parishioners, attending a Spanish Mass every Saturday.

Martha Smith Gomez, 13, served on the altar during Sunday’s Mass of dedication. She said her family has been attending the church “since the beginning.”

“I really liked how he came from America and came to help a community less fortunate and also his death was inspiring to me,” Smith Gomez said of Blessed Rother.

Throughout the past three years, parishioners have moved from a community center to a high school and are now renting a former Baptist church at 758 Hill Avenue. They have been raising money to purchase land to build a permanent home.

“They’re just thrilled they’re going to have the church, a place to celebrate their faith there,” Father Marquez-Munoz said. “Some of these people don’t have a way of transportation or are undocumented so they can’t get a driver’s license.”

For now, a picture of Blessed Rother hangs in the sanctuary. A photo of a smiling Pope Francis adorns the right wall upon entering the noticeably hot church. Father Marquez-Munoz explained that the parish’s air conditioning unit does not work well, but putting forth money to replace it would take away from a future church fund. Parishioners have chosen to withstand the heat.

It’s a kind of place Blessed Rother, who in addition to Santiago Atitlán served for a mission in Cerro de Oro, would have felt at home.

“It’s a perfect fit. The bishop mentioned this too is a mission, the kind of community that Blessed Father Stanley Rother served,” said Tim Muldoon, director of mission education for Catholic Extension Society, which works to help serve mission dioceses. Muldoon told parishioners that Catholic Extension through the Francis Grant would award the community $2,500.

Just as the cause for canonization begins for Blessed Rother, the community will continue to work toward their own miracle -- a permanent home.

Documentary: “An Ordinary Martyr: The Life and Death of Blessed Stanley Rother"