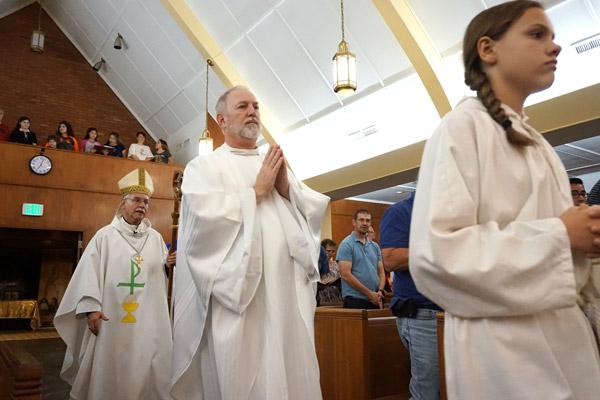 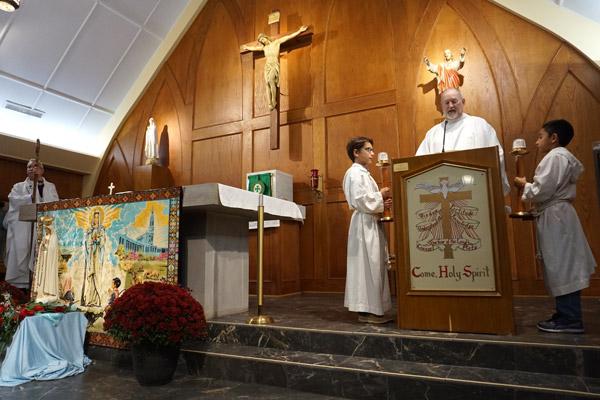 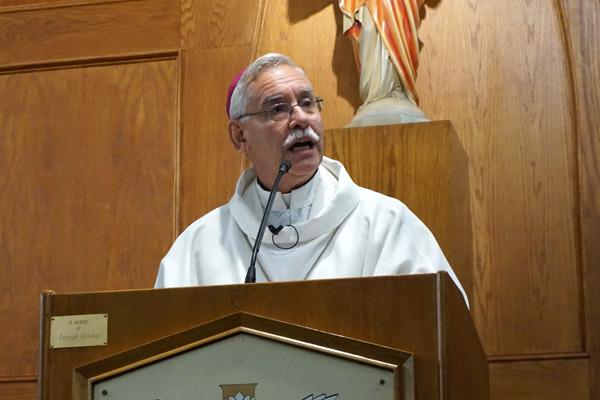 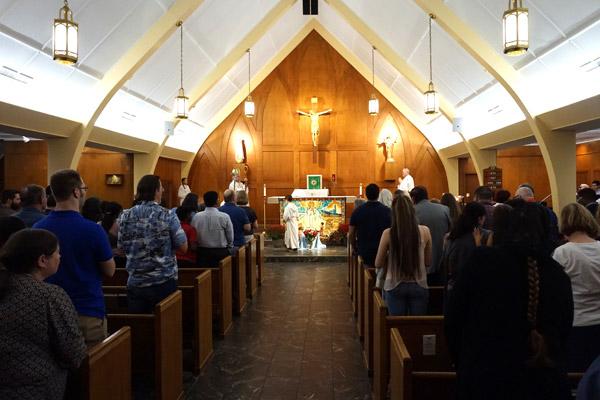 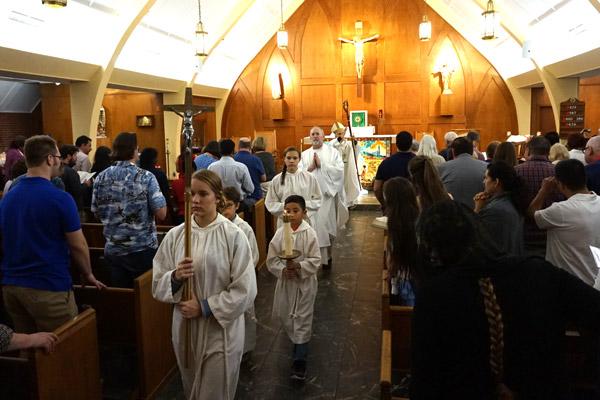 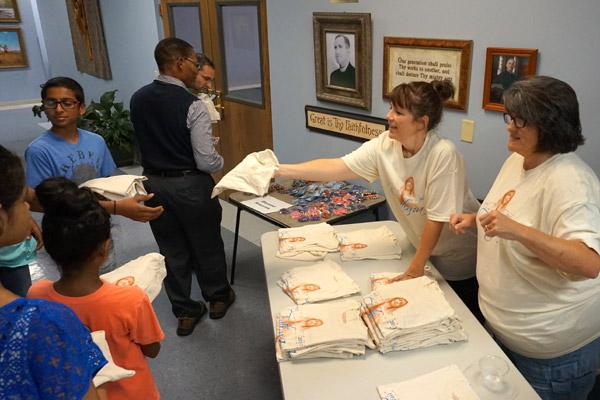 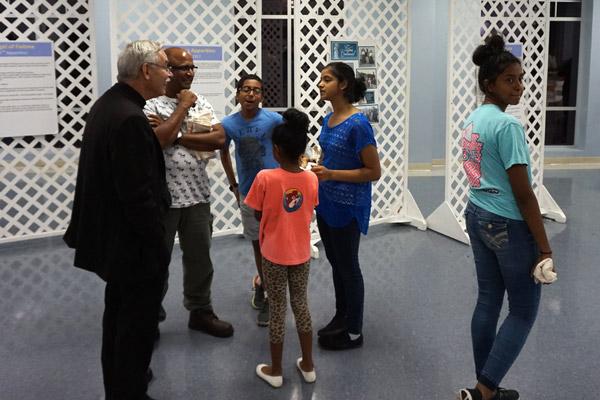 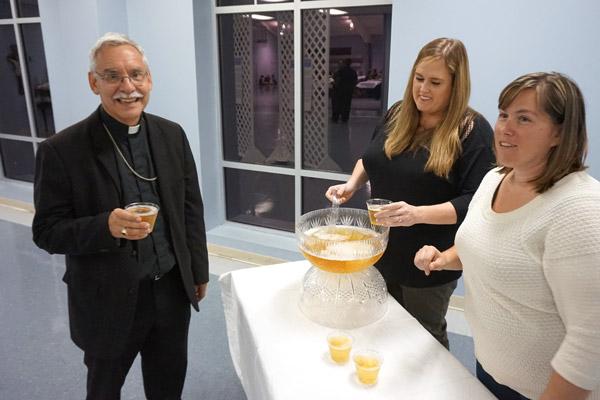 Parish has held special Masses, confession times, receptions since May 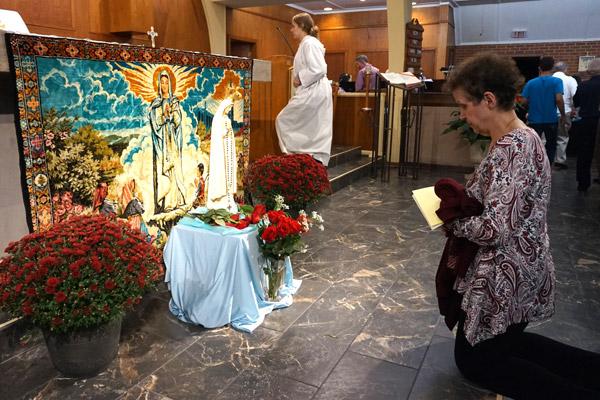 BENTON — Mollie Boeving knelt before a statue of Our Lady of Fatima, eyes first lowered in prayer, then gazing upon it. As a five-year breast cancer survivor, Boeving has a lot to be thankful for, particularly the comfort of the Virgin Mary when she needed it most.

“We’re nothing without her. This world needs Mary so much,” Boeving said.

A Catholic in Pine Bluff, Boeving came to the centennial celebration of the apparitions at Fatima at Our Lady of Fatima Church in Benton Oct. 13. The next day, she’d participate in the Komen Race for the Cure in Little Rock.

“Suffering is a part of life. We can give that back to Christ.”

“Her message, which is as meaningful today as it was 100 years ago, is to call us to a conversion of heart, to repentance from sin and to prayer, especially the rosary.” Bishop Anthony B. Taylor, in his homily for Mass Oct. 13 at Our Lady of Fatima Church in Benton

Bishop Anthony B. Taylor celebrated a bilingual Mass at Our Lady of Fatima Church on the 100th anniversary of the last apparition of the Blessed Virgin Mary at Fatima, Portugal. Confession was available before and after Mass. A reception followed the Mass with desserts, T-shirts with the Our Lady of Fatima image and blessed rosaries.

“Her message, which is as meaningful today as it was 100 years ago, is to call us to a conversion of heart, to repentance from sin and to prayer, especially the rosary. We know how on-target her message continues to be a century later in today’s increasingly immoral and secular society,” Bishop Taylor said in his homily, adding, “evil will not prevail again.”

In honor of the centennial anniversary, Pope Francis decreed that those who pray in front of an image of Our Lady of Fatima can receive a plenary indulgence, that also includes standard requirements of sacramental confession, holy Communion and a prayer for the Holy Father’s intentions.

Our Lady of Fatima parishioner Greg Orewa, a married father of one with another on the way and native of Nigeria, said people should be “proud of our faith” and pray for Mary’s intercession.

“I say my rosary all the time. It’s just a blessing to be Catholic. I wouldn’t miss this for anything in the world,” he said after the Mass. “… There’s still a lot of hope. The more we pray and say our rosary, our Mother will come to us.”

On May 13, 1917, three shepherd children from Portugal, St. Francisco and St. Jacinta Marto and Lucia dos Santos, saw apparitions of the Blessed Virgin Mary, shining with radiant light. They continued to see her each month on the 13th (except for August when she appeared on the 19th) and she called for a devotion to the Trinity, daily rosary in order to bring peace and an end to World War I. She also revealed three apocalyptic visions, known as the Three Secrets of Fatima. The final apparition came Oct. 13 when about 70,000 people witnessed the sun “dancing” and her appearance above Fatima.

“I think it’s always good when we can try to reach out and be welcoming to other people,” said Nancy Christian, parish life chairwoman on the parish council. “Especially at this time in our world and our country, how much peace is needed. I hope it’s made people more aware of that — to pray the rosary for peace.”

While most of the people coming to the festivities on the 13th have been parishioners, Christian said there has always been a handful of people from other parishes. Large posters were set up at the receptions to tell the stories of each of the apparitions.

Parishioner Dunstan Perera came to the Mass and reception with his four children. The native of Sri Lanka, a predominately Buddhist country, said “there’s always a big place for our Mother” among Catholics in the country. His daughter Deana, 15, has been learning of the apparitions in religious education classes.

“I like how the kids no matter what they faced, the kids would keep the secrets” the Blessed Mother shared with them at the time, she said.

Father Paul Worm, who became pastor in February, said it’s been a learning experience for him as well. In many of his homilies, he’s made it a point to discuss Fatima.

“I’ve been pleasantly surprised that I’ve heard a lot of confessions prior to the Masses. I’ve extended the time for an hour,” he said. “That’s been probably been the most successful part of the program, people coming back to confession.”

Several in the parish have studied books that guide them through 33 days of preparation to consecrate themselves to Jesus through the Immaculate Heart of Mary. Though the prayerful preparation was not directly related to the Fatima observances, “One of the things she told the children is that the triumph of Jesus would be through her immaculate heart,” Father Worm said.

Will Orellana, a married father of two and native of Guatemala, played guitar during the Mass.

“From when I was little my family told me the history,” of Our Lady of Fatima, he said at the reception. “We believe in her apparitions and whatever she wants us to do. We should pray a lot more.”

Father Worm said it’s important to remember Fatima whether the end of times is nearing or not.

“I think it’s important just because people think we’re in the end times — I suppose every generation has thought that — because our newspaper is filled with gloom and doom,” Father Worm said. “We shouldn’t let (Fatima) go by unnoticed. I think it’s important to know the story of Fatima.”