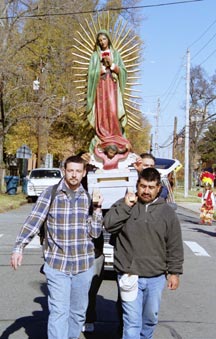 FAYETTEVILLE -- Every Mexican child knows the story of Our Lady of Guadalupe and St. Juan Diego, but time hasn't lessened the wonder of the details.

Juan Diego was a poor Indian born in rural Mexico almost 20 years before Columbus sailed for the New World. Christianity arrived during his lifetime when 12 Franciscans came to Mexico City in 1524. Juan Diego eventually converted to Christianity and, upon the death of his wife moved to his uncle's home near Mexico City.

It was in 1531 that Juan Diego's somewhat ordinary life became extraordinary. Juan Diego, who walked miles each weekend to worship, encountered the Blessed Virgin Mary on his walk one day. Through a series of appearances, she told the poor farmer she wanted a temple built on the Mexican plains. Juan Diego relayed the message to the local bishop who, perhaps understandably, wasn't sure if he should believe the peasant.

So Mary gave Juan Diego a sign as the bishop requested. She told him to go to a specific spot in the desert and pick the roses he would find there. It was winter and it was the desert so the ground should have been desolate, but Juan Diego found the roses, which he delivered to the bishop.

While the roses appeared so beautifully, even more miraculous was the image of Mary that appeared in the tilma (cloak) Juan Diego wore. The bishop was persuaded and a beautiful church was built to honor Our Lady of Guadalupe. Her image is preserved today in the modern Basilica of Guadalupe in Mexico City, which replaced the original 16th-century shrine.

The story of St. Juan Diego -- who was canonized by Pope John Paul II in 2002 -- is one cherished by Mexicans as well as all of Latin America.

Mexican native Lucy Morlet, Hispanic ministry/parish life coordinator for St. Joseph Church in Fayetteville, said many make pilgrimages annually to the basilica and to other churches around the world to honor Our Lady of Guadalupe.

Some people walk for days to go to Mexico City for the Dec. 12 feast day, and it's common to see people crawling in gratitude for favors granted through the Virgin Mary's intercession, she said.

Lizzette Castonella, a member of St. Raphael Church in Springdale, said pilgrimages to the basilica also occur throughout the year from the various Mexican states.

Castonella said she is a native of the state of Chihuahua, and residents there know their usual pilgrimage month is July.

Another popular custom, Morlet said, is that "all the girls dress up like little Indian girls and all the boys dress as St. Juan Diego."

And, of course, "Everybody brings roses."

Sister Gisela Rivera, CMST, director of religious education for Hispanics at St. Raphael Church, said Hispanics are deeply devoted to Our Lady of Guadalupe and are happy to share the devotion with Anglos. She is, after all, known as Our Lady of the Americas, patron of the entire North-American continent.

Sister Gisela, also from Mexico, said at the time Our Lady of Guadalupe appeared to St. Juan Diego, Mexico was in disarray.

The people worshipped nature -- the sun or the rain, for example -- and human sacrifices were common. And while the Conquistadors came from Spain to evangelize, they, too, added to the misery by destroying temples in search for gold, which angered the native Indians who thought the true God wouldn't kill and ravage the people, Sister Gisela said.

The Virgin Mary appeared to St. Juan Diego four times, she said, and St. Juan Diego asked her to show herself to someone more important than he. Our Lady declined, telling him he was her choice.

"She came to give life to a new generation, saving them from slavery, and that is why she is very important to us," Sister Gisela said. "Our Lady came at the right time to help these people."

Mexicans turn to Our Lady in times of trouble, she said.

"Whenever the sufferings come, then the Blessed Mother is there, listening to prayers."

Castonella has lived in the United States for 10 years and speaks excellent English, but when it comes to expressing her devotion to Our Lady of Guadalupe, she hesitates, uncertain she'll find the proper words in English.

"I feel so proud and so thankful to my mother and father for teaching me devotion to Our Lady," she said.

Castonella said that every Hispanic household has an image of Our Lady of Guadalupe in a place of honor and it's common to pray the rosary daily.

Sister Gisela said when she saw the original tilma of Our Lady of Guadalupe enshrined at the basilica it appeared more lifelike than any painting or other artwork.

She said she thinks the devotion is spreading.

"Little by little, we have invited Anglo people (to participate) because she is the mother of them and of our people, too," Sister Gisela said. "She came to show them our God wants us to love one another instead of hating each other."