Point guard Christian Briggler versatile on and off court 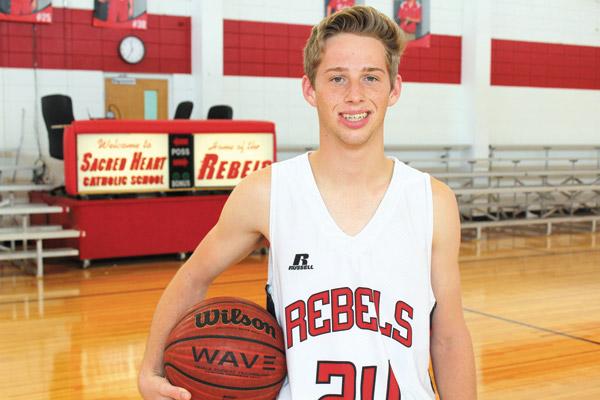 Dwain Hebda
Christian Briggler, point guard for the Sacred Heart Rebels in Morrilton, takes a rare breather in the school gym. The senior starter, GPA 3.6, personifies hard work both on and off the floor.

Dwain Hebda
Christian Briggler, point guard for the Sacred Heart Rebels in Morrilton, takes a rare breather in the school gym. The senior starter, GPA 3.6, personifies hard work both on and off the floor.

In the sporting pantheon, there exist some rare examples of versatility. A prize baseballer is a “five-tool” player: hit for average, for power, can run, throw and catch. The winning decathlete shows excellence over 10 separate track and field events. The most well-equipped Swiss Army knife ever made, the Wenger Giant, featured 85 tools and 141 functions.

Briggler doesn’t play every sport the school offers, in fact basketball is the only one he really cares about, except for a little golf. But when it comes to versatility both on and off the court, no one can hold a candle to the wiry point guard.

“I’ve always had a little drive, I guess,” he said in a smooth River Valley drawl. “I can’t sit still.”

“I think we can be really good this year, honestly. We’re pretty tight. Small school and we stay close.” Christian Briggler

Briggler comes from the farm where hard work is par for the course and he credits his father Michael with setting the standard for him early in life. But even his own family, members of Sacred Heart Church in Morrilton, is hard-pressed to match Christian’s schedule on any given day.

“In the school year, I’ll get up at 6 every morning and that’s usually when I do homework and stuff,” he said. “Go to school and go to basketball until usually around 5 o’clock or so and then I go and work till about dark.”

“Mondays and Tuesdays I babysit four crazy kids. Wednesday, Thursday, Friday and some Saturdays I work at a vet clinic here in town.”

“Then after babysitting and after school all those days, plus Saturdays and Sundays, me and my brother have our own mowing business,” he continued. “When I’m not mowing and any other extra time, my uncle’s a contractor so I do clean-ups and things like that. Or if they remodel a house I usually go in there and tear down walls, anything I can possibly do to make money.”

“And I’m class president this year and I was last year. I’m Key Club president and I’m in Beta Club, student council and CYM,” he said. “Then anything to do with church, like, I’m an altar server and a Eucharistic minister and on the funeral committee. We serve at funerals.”

“When I work over the summer, I save up a couple hundred dollars and I go to a sale barn and I buy a calf and raise them. I’ll keep them until they’re a lot bigger and then I’ll sell them,” he said. “They’re kind of my investment. This year I’ve bought 10. I have 10 head of cows right now.”

If that doesn’t make your head spin, consider at the start of last season he actually looked to take on more responsibility with the Rebels basketball team. Dissatisfied he wasn’t starting, the usually soft-spoken point guard sought out head coach Aaron Duvall to plead his case.

“I felt I should be starting, like, I know I can start. I can get us somewhere,” he said. “So I went in there to Coach and I raised some cane and really talked to him. I was like, ‘I deserve it and I know I can do it.’”

Briggler quickly earned starter status and behind his leadership, Sacred Heart came through districts as the No. 6 seed, knocking out the No. 2 seed on its home floor to do it. At regionals, a squad that had beaten them by 20 earlier in the year stood between them and state.

“All week we just worked and worked and I kept shooting them jumpers over and over,” Briggler said. “We got to game night and I hit 28 that night and put us in the state tournament.”

This season Briggler and his mates have set their sights higher, wanting to advance in the state tourney. Only time will tell if that happens, but one thing is for certain — there’s not a player in the state who will work harder than No. 24.

“There’s three seniors this year, myself and two of my best friends. We’ve all played together since second grade,” he said. “I think we can be really good this year, honestly. We’re pretty tight. Small school and we stay close.”