Stork buses take pregnancy help to women who need it

Little Rock center got new van in October; Pine Bluff residents will get van in 2018 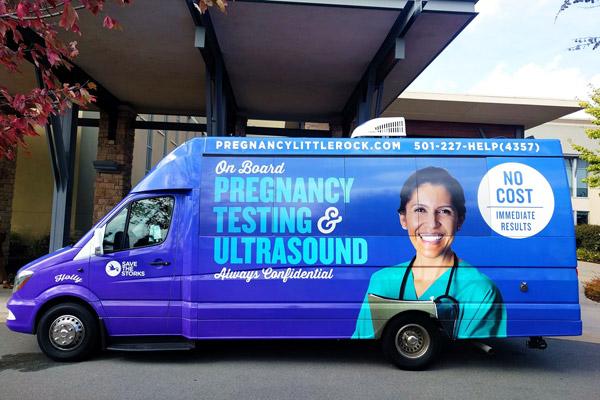 The Arkansas Pregnancy Resource Center in Little Rock received a Save the Stork bus, a Mercedes Sprinter van equipped as a mobile clinic, Oct. 9 with support from Fellowship Bible Church. The state Knights of Columbus Council is raising money to donate a similar van to Hope Women’s Resource Center in Pine Bluff.

The Arkansas Pregnancy Resource Center in Little Rock received a Save the Stork bus, a Mercedes Sprinter van equipped as a mobile clinic, Oct. 9 with support from Fellowship Bible Church. The state Knights of Columbus Council is raising money to donate a similar van to Hope Women’s Resource Center in Pine Bluff.

Following Jesus’ command to go out and spread God’s life-saving truth, the Hope Women’s Resource Center in Pine Bluff will be able to reach more women in a crisis pregnancy thanks to money being raised by the state Knights of Columbus Council for a mobile medical unit.

“The numbers from Save the Storks right now, four out of five women that go into a Save the Storks bus decide to keep their baby,” said Knights state deputy Philip Savage. “We are pro-life and we have to stand up and show we are … we have to go to where the folks are at.”

In July, the start of their fraternal year, the knights committed to raising $100,000 for a pregnancy center in Arkansas to purchase a Stork bus from the Save the Storks ministry as this year’s state initiative.

The national ministry started in 2011 and primarily works to provide mobile medical units to crisis pregnancy centers around the country.

After interviews conducted by Catherine Phillips, respect life director for the Diocese of Little Rock, Hope Women’s Resource Center was chosen to be the recipient.

Debra Burchfield, executive director of the Hope center for the past 13 years, said, “We were very excited and just a little bit amazed. Here’s another miracle that God has placed in our hands that we could really use in these areas.”

Burchfield said the nonprofit has partnered on other projects with the Knights and though not a Catholic pregnancy center, they are centered on Christian values. They do not provide birth control and promote “sexual purity,” so a birth mother understands “all life is valuable,” including hers, Burchfield said.

The center, which is currently renovating an 8,000-square-foot building near Jefferson Regional Medical Center in Pine Bluff, has operated a mobile medical unit for four years. They travel to Stuttgart, De Witt, Star City and Dumas in a 1990 retrofitted RV with an ultrasound unit. The center conducts about 1,000 pregnancy tests per year between the center and mobile unit. However, the RV requires more maintenance and “if it goes down, it’s down,” Burchfield said.

“Catherine helped us choose that based on the needs and based on the resources they have,” Savage said of why the Hope center was chosen, adding that Jefferson County has one of the highest abortion rates in the state.

Dale Flamand, who with his wife Mary serves as the state council’s Culture of Life Couple, helped create a framework for how the fundraiser will work. Each knight in the state, 7,600 men in 63 councils, is asked to donate $14.50 or raise the money as a council.

“The pro-life community is a lot larger than just our little Catholic community … there’s a lot of people out there that are pro-life that would love to donate to something like this, but they just don’t know about it,” Flamand said, explaining that councils were encouraged to raise funds not only in the parish, but in their community.

The new unit will be 2018 Mercedes Sprinter Van, Savage said. The Hope center will hire a full-time technician so ultrasounds can be done five days a week and move into other areas in need like East End and McGehee.

“We’re really hoping to expand that reach. The Lord has just been opening doors in that area. We’ve had the call and we know that and we’ve just been trying to figure out ‘how can we make this happen?’” Burchfield said. The center has to raise an additional $48,000 per requirements from Save the Storks.

The ultrasound machine was donated by the Christ the King Church Knights Council 10167 in Little Rock. Flamand, who is grand knight, is close to giving the $13,000 to the pro-life ultrasound company SAOTE, which already installed the machine in good faith that the knights would come through. The Supreme Council, at the national level, will donate the remaining $13,000 for a total of $26,000.

The Arkansas Pregnancy Resource Center van has WiFi, an exam table, ultrasound unit, seating for clients, a massage chair and flat screen TVs, Lashbrook said. They provide ultrasounds, limited STI testing and information about sexual health. They plan to travel to health fairs, events and to organizations like Jericho Way day resource center for the homeless.

The knights fundraiser will end June 30, the close of their fraternal year and the custom-built van will be at Hope Women’s Resource Center before the end of next year.

Flamand said the gift is just another way the Knights are dedicated to pro-life issues.

“We’re taught to show an outward sign of our inward conversion and this is an outward activity we do that shows what we feel and believe in our hearts, minds and souls,” Flamand said.