While in Medjugorje, Father Keller 'zapped' by the Blessed Mother 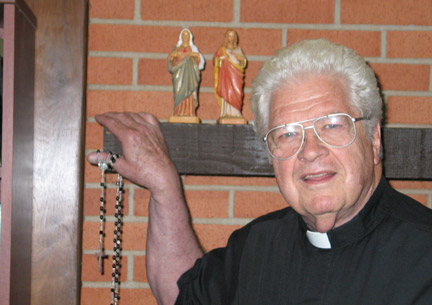 CARLISLE -- A bumper sticker on Father Thomas Keller's car window says, "If you can't find Jesus, look for his mother!"

Inside his Carlisle home, images of "Our Lady" are found in almost every room. An Our Lady of the Rosa Mistica statue is the dining-room table centerpiece. Our Lady of Fatima stands on his desk while Our Lady of Guadalupe hangs near the living room fireplace. Magnets hold pictures of the Immaculate Heart of Mary with the Sacred Heart of Jesus on the kitchen refrigerator.

His largest Marian collection, however, is kept at the Life Center in Little Rock, which was built in 1995 to be a place of prayer for the unborn and to house the Arkansas Right to Life state offices.

" Father Keller, 73, pastor of St. Rose of Lima in Carlisle and Holy Trinity in England, loves to display images of the Blessed Virgin Mary, but he loves to talk about her even more.

He is nearly a walking encyclopedia on all things Marian. In fact during the interview with Arkansas Catholic, he resisted talking about himself: "I want it to be about Our Lady," he said.

Father Keller's deep devotion to the mother of Jesus is clear to anyone who knows him, but he admits it wasn't always that way.

As a boy he was an altar server for Bishop John Morris. He attended the former St. Andrew School in Little Rock and later was valedictorian of the Catholic High School Class of 1950. After two years at Villanova University, a Catholic college near Philadelphia, he gave up a Naval ROTC scholarship to attend St. John Seminary in Little Rock where he was ordained to the priesthood in 1958. Since then he has served in several parishes around the state. His longest assignment was as pastor of Our Lady of Good Counsel in Little Rock for 14 years.

While growing up Catholic and in the early days of his priesthood, he said he knew the Church's teaching on Mary and her role in God's plan for salvation, but he really didn't have a relationship with her.

"When I was at Jonesboro for instance, there was a statue of Our Lady of Fatima; I didn't even know what it was," he said.

Father Keller said he was a product of his time. In the years following the Second Vatican Council Mary was left out of much of the theology being taught. "It left Mary out of everything. The rosary was dropped. It was just really sad."

A trip to Medjugorje, Bosnia-Herzegovina, in 1989 changed everything for him. That was where "Our Lady whipped me back in line," he said.

A priest friend who once served in Arkansas, Father Henry Bordeaux, OCD, from Oklahoma City, invited him to go to the site where a group of teenagers have reported regular apparitions of Our Lady since 1981. Father Keller didn't want to go, so Father Bordeaux told him not to think of it as a pilgrimage, but just a sightseeing trip.

"So I went to Medjugorje and got zapped by Our Lady with so much fantastic, beautiful faith," Father Keller said. "Then I picked up the rosary. ... That was a blessing for Desert Storm a year later."

He is referring to his six months on active duty during the Gulf War in Iraq in 1990-91. He was pastor of Good Counsel at the time.

Father Keller had joined the Navy Reserve at 17 and in 1969 he joined the Arkansas National Guard. He was chaplain of the 39th Infantry Brigade for two years before being assigned to the 148th Evacuation Hospital at Camp Robinson and Booneville. In all, he served for 29 years in the Navy, guard and reserves.

"Now I know why Jesus went into the desert," Father Keller said. "It is one very difficult place to live. We were frozen in January and burned up when it got to March."

Father Keller held religious services for the troops in and around the evac hospitals he served in Saudi Arabia.

"We always said the rosary every night," he said.

When he returned to Little Rock, he brought the rosary with him. He started a monthly rosary and Benediction at Good Counsel. A few years later he added perpetual adoration at the parish, the first in the diocese to do so, he said.

Then in what seems like a natural progression, he added the devotion of the Alliance of the Two Hearts in 1993, not long after making a pilgrimage to holy sites in Europe.

On the trip he was introduced to the fairly new devotion, which honors the Immaculate Heart of Mary and the Sacred Heart of Jesus through Mass, prayers for the reparation of sins, adoration and confession on the first Fridays and the first Saturdays of each month.

Through prayer, research and the realization that the Church approved this devotion, he said he was led to offer it in his parish.

Since then Father Keller has started the alliance in every parish in which he has served. He offers it now at St. Rose of Lima in Carlisle.

Father Keller said his relationship with Mary has automatically brought him to Jesus. He understands the Scriptures better, he prays more and appreciates the rosary in a more profound way.

"The basic point of all of it is holiness, to try to increase our personal holiness, our relationship with God, and honor of Our Lady and the saints and the angels."

Father Keller said he wants people to understand that Mary's job is to lead everyone to her Son.

Alliance of the Two Hearts

The alliance of Jesus and Mary devotion includes adoration of Blessed Sacrament; confession; the Nine Choirs of Angels Prayers; the entire rosary; the Little Office of the Blessed Virgin Mary; two Masses (one on Friday and one on Saturday); litanies including those for Mary and Jesus; and the Chaplet of Divine Mercy. At St. Rose of Lima in Carlisle the devotion is from 6 to 8:30 p.m. on the first Friday of each month and from 7:30 to 9 a.m. the next morning. Confession is offered throughout the devotion.