Minister for religious can relate to struggling with the call 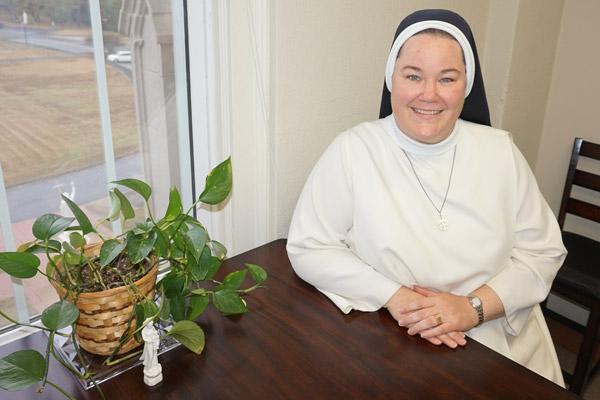 Aprille Hanson
Sister Mary Clare Bezner, OSB, named the diocesan minister for religious in September, put a table in her Little Rock office specifically to provide a place for fellowship and discussion.

Aprille Hanson
Sister Mary Clare Bezner, OSB, named the diocesan minister for religious in September, put a table in her Little Rock office specifically to provide a place for fellowship and discussion.

A dark cherry-colored table with pub chairs stands by the window in Sister Mary Clare Bezner’s diocesan office. It’s bare, except for a small vining plant coupled with a statue of the Blessed Virgin Mary holding Jesus. It might not seem like anything extraordinary, but for the new minister for the religious, it symbolizes the welcoming aura she hopes to convey in her new role.

“I actually got this table in hopes we’d have a place to sit down and talk. We could have meals, we could have whatever,” she said. “… I really enjoy people. So I’m hoping each and every religious in our diocese would know if they ever needed to speak with somebody or had a message they wanted to give to the diocese or the bishop that they would have the person they need to do that.”

“There are sisters and brothers sometimes and priests maybe … that might feel they are a little on the periphery. So I want to be that person that can go out and reach them and let them know that our bishop cares and he really does,” she said.

Growing up the oldest of four children in Lindsay, Texas, the 41-year-old said missing Sunday Mass was never an option. Her mother told her “if anybody in my family had a vocation it was you.”

“When I was a teenager I really did the opposite of what my mom wanted … I didn’t have thoughts of being a religious when I was young. As a matter of fact, I thought they were kind of weird,” she laughed.

At 18, Sister Mary Clare joined the U.S. Air Force, serving as a medic stationed at Offutt Air Force Base in Nebraska. But the secular, party environment was draining.

“I went from a very faith-filled Catholic place to a very intense, secular, morally disgusting place. And I didn’t fit. But I wanted to, I wanted to have friends and be a part of them. So it was a hard-knock,” she said.

After her discharge in 1997, she went to nursing school, then working as a labor and delivery nurse.

While serving at a Honduras mission in 2001, she met some joyful religious sisters.

“I thought that’s really beautiful. Still didn’t think I wanted to be one,” she said.

Back in the United States, she began going to a prayer group and praying the rosary.

During Scripture study, the story of Abraham and Isaac touched her deeply, she said. The teacher pointed out everyone gives up something for Jesus and she knew that meant marriage and her own children. This slowly brought her to explore religious communities, including Holy Angels in Jonesboro. Much of her family lives in Muenster, Texas, where Holy Angels has a mission. Her great-great-aunt Sister Anselma Haverkamp, whom she did not know, died at 105 years old in 2003. Two years later she entered the convent at 28 years old.

“As I was praying the Liturgy of the Hours with them, I heard the Lord … speak to my heart and say, ‘These are the sisters you’re supposed to be praying with,’” she said.

It’s this winding path to religious life that gives her compassionate perspective to youth struggling with their calling. As minister for religious, she is tasked with organizing a yearly vocations retreat.

“I have such a desire to help the Church grow,” Sister Mary Clare said. “… I would never want anyone to join a community that wasn’t meant for them. I want them to find the community that God made them to be in.”

She is still the vocations director for Holy Angels, but had to step away from Hispanic ministry. As a liaison to the bishop, Sister Mary Clare said she’s already made appointments with religious communities and hopes to meet with them regularly.

“Being a mother, which is what I consider myself, has different forms. The mother that I always wanted to be I won’t be, but the mother I never dreamed was possible I am,” she said.