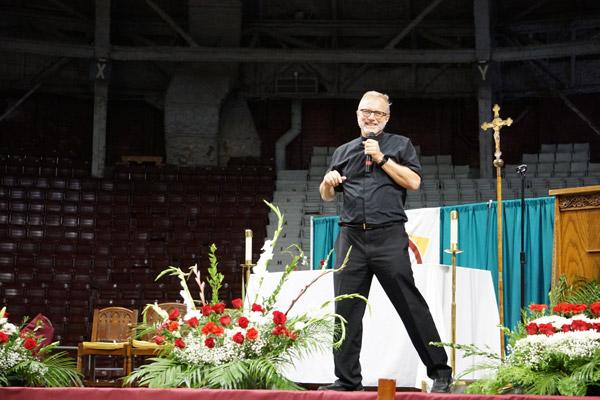 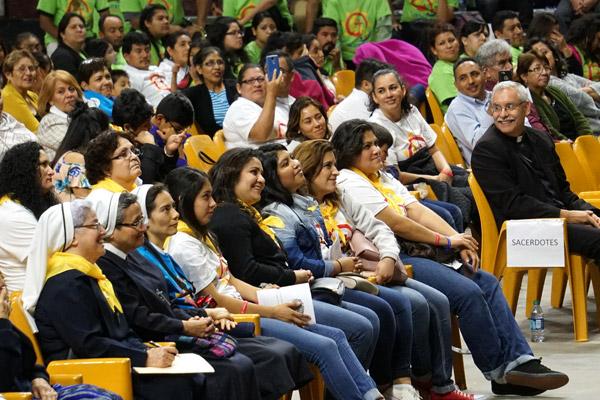 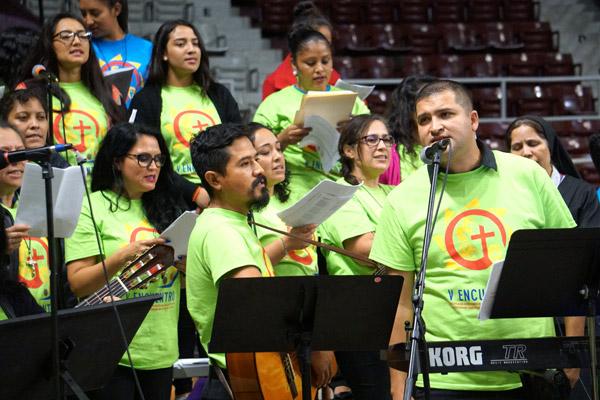 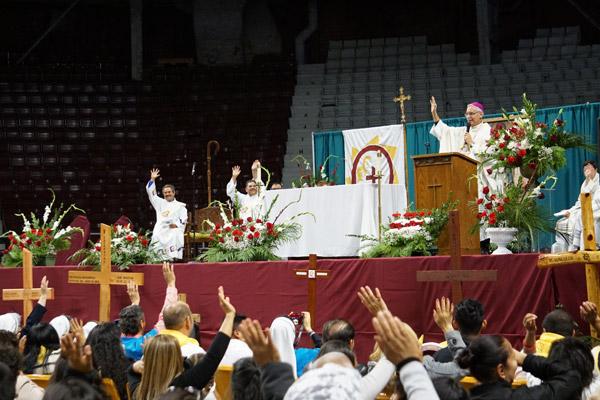 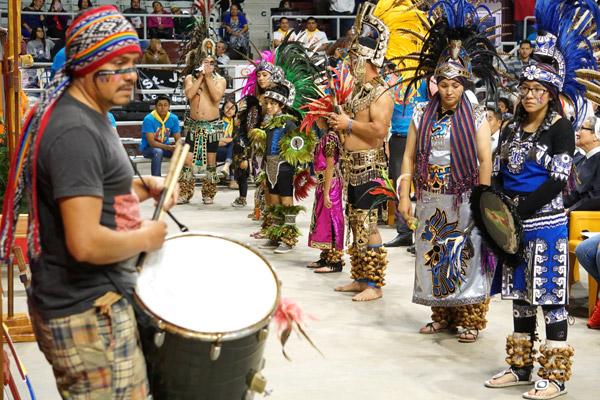 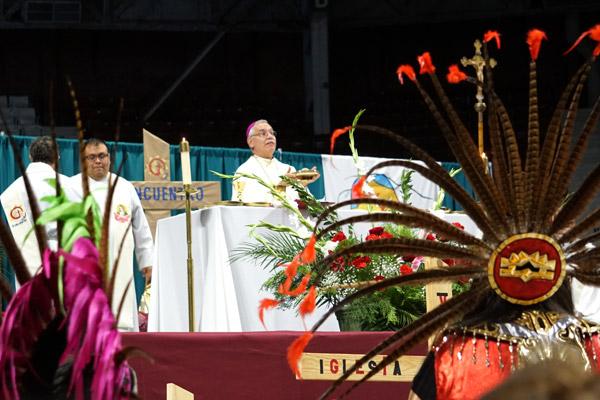 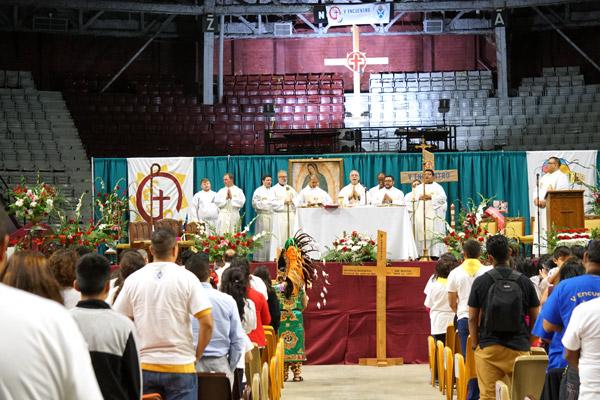 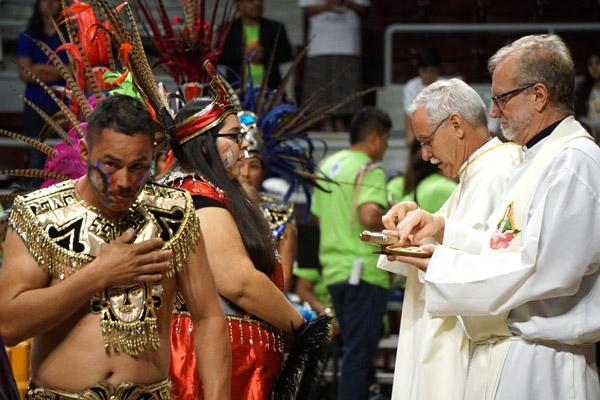 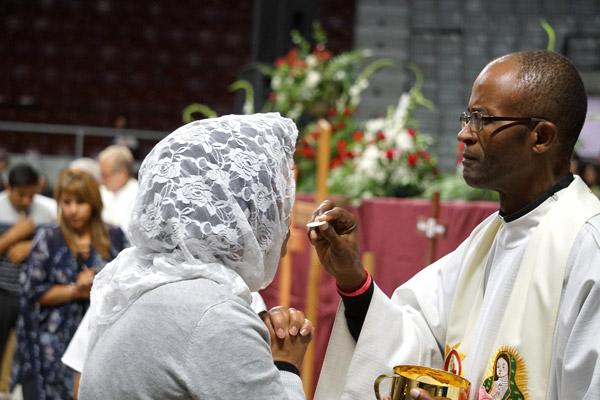 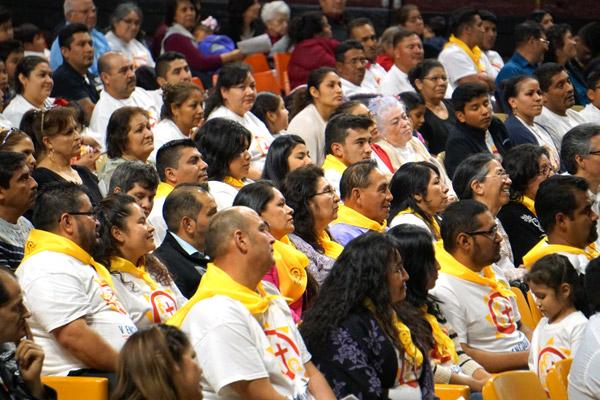 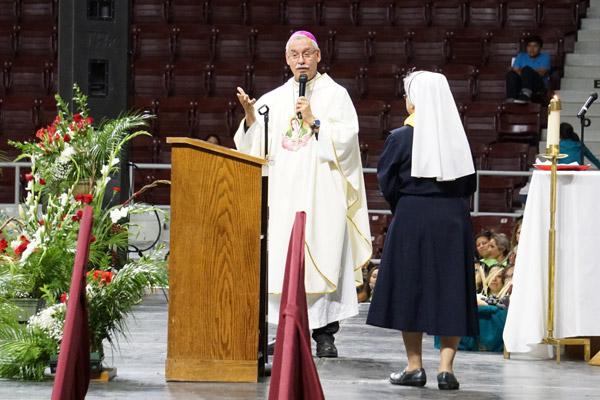 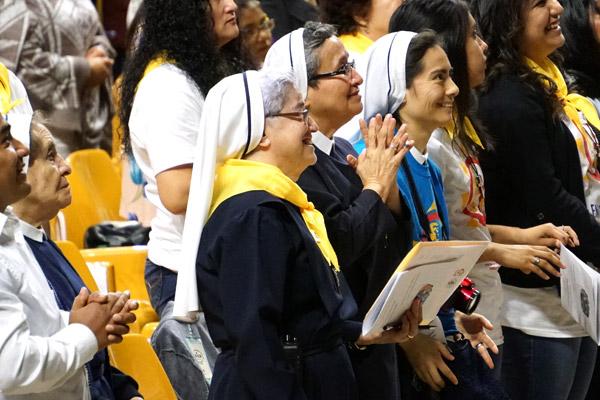 The Diocesan Encuentro, held at Barton Coliseum at the State Fairgrounds Nov. 18, was a day of miracles.

The event was set to open around 10 a.m. and Sister Norma Edith Muñoz, MCP, director of Hispanic ministry for the Diocese of Little Rock, said they were greeted by darkness. The lights had gone out for part of Little Rock and it was estimated to take between two to three hours to get them back on. She asked the man in charge of lights for the coliseum, “‘Do you believe in the power of prayer?’ and he said ‘Yes’” and the lights came back on within 10 minutes of the start time, Sister Norma said.

And when the threat of rain came, she was clear, “Oh no Lord, we agreed it can rain after the event” and the weather cleared.

“There were little miracles all day,” she said for the 2,000 people who attended the diocesan celebration of a program that began last year. “There were more priests coming and going all day, the bishop was here all day long. It’s been a beautiful event.”

The United States Conference of Catholic Bishops created the evangelization initiative V Encuentro, or “Fifth Encounter” for Hispanic and Latino communities throughout the country to share their faith and make themselves known in the Church. It’s a four-year program that will later include a Regional and National Encuentro.

The program’s spirituality stems from the disciples at Emmaus, Luke 24:13-35, as they have an encounter with Jesus.

Each participating parish held its own Encuentro. The Diocesan Encuentro brought those parishes and anyone who wanted to attend together for a day of music, testimonials from those who went through the program and a bilingual Mass celebrated by Bishop Anthony B. Taylor. Aztec dancers from Hot Springs and a bilingual choir provided the music.

Father Rubén Quinteros, pastor of Immaculate Heart of Mary Church in North Little Rock (Marche), was one of several priests hearing confessions for about four hours on Saturday.

“I think it’s a wonderful opportunity not only to listen to the talks, but to come to the sacraments and be reconciled” with God “and with our brothers and sisters,” he said. “… The Church is not only our little parish; it’s wider than that … we need to make our voices heard in the Church.”

About 30 parish teams began evangelizing to primarily fallen-away Catholics in their neighborhoods and cities.

Anna Salcido, a member of St. Vincent de Paul Church in Rogers who attended the Diocesan Encuentro with her 12-year-old daughter Citlaly, said she always invites her neighbors to Mass and while they do make sure their children have First Communion and Quinceañeras, she’s seen them stay away because some parishioners are “hypocritical.”

“Don’t look at the people, look at the faith, look at your Church,” Salcido said. “For me, it’s important to go out and explain to people we have the most blessed faith in Jesus,” in receiving his body and blood in the Eucharist.

Salcido admits, “I used to think like them,” but after attending retreats and participating in V Encuentro, “I have to put my eyes on Jesus and not on people.”

Her daughter said the best parts of the day were the food and cheering for her parish when they called out St. Vincent de Paul.

“I think it’s because generations change throughout time,” and while young people are tempted with drugs and peer pressure, Citlaly said a program like this is important to let all youth know “that they have support and that Jesus loves them and they should be closer to him.”

That evangelization even reached prison.

Josefina Maranon, a member of St. Edward Church in Little Rock, meets with inmates typically once a week and shared the Encuentro program to make sure they know Jesus is “alive in them and loves them.”

“It’s important because we are open to the people, we’re taking the word of the Lord out,” she said, adding the inmates are sharing it with others and “the group is growing.”

While other dioceses may have closed off the event to only those who participated in the program, Little Rock’s was open to people like Walter Cruz, 25, who happened to be town with family and decided to attend.

“People lose faith and can’t find it. You come here and people have a lot of faith and love others,” said Cruz, a parishioner at St. Martin Church in Nashville.

While it was attended by Anglos, Cruz said more should come to Latino events.

“Don’t be shy to come to these type of encuentros. Be willing to come and listen to what they have to say because it’s very powerful.”

Vicar general and diocesan vocations director Msgr. Scott Friend was one of the speakers and Anna Segovia said after his talk that he emphasized, “We need to believe more that God is with us all the time, without seeing him. Jesus is around us because every one person is Jesus.”

Segovia, a parishioner at St. John Church in Russellville, said her faith is “deep now” after participating in parish activites like the Charismatic movement and the V Encuentro.

“I think a lot of people don’t know their faith. We have to go out, knock on doors of houses” and share about our personal relationship with Jesus, she said. “They want to know more about God.”

Events like this help the Catholic Latino community come together and are reinforced in their belief that “we know we are a strong people with God and we need to have our fears go away,” Segovia said.

Bishop Taylor emphasized in the face of “hateful rhetoric from our government,” immigrants need to be strong in their faith. He pointed out the courage in those who choose to escape the violence of their country in order to provide a better life for their families in the face of unjust laws that are trying to keep people out of the United States.

“One of the things I’m praying for is that this V Encuentro increases our courage and our gratitude going forward. Especially among those of you who belong to the second generation and are now benefiting from the many sacrifices that your immigrant parents made to provide you a better life,” Bishop Taylor said. “And specifically that you now become courageous missionary disciples yourselves.”

Celebration of Hispanic faith is Nov. 18 in Little Rock