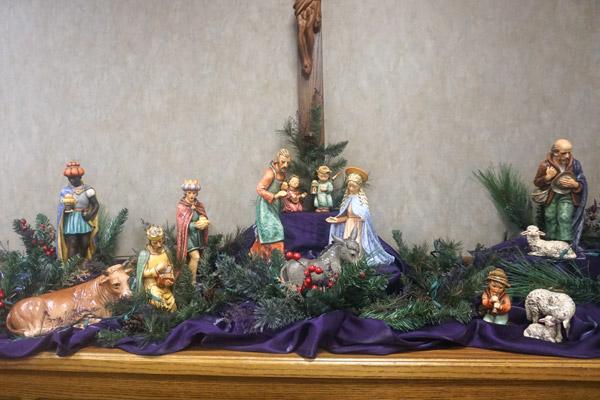 Did you know those Hummel figurines sitting on your grandmother’s shelf were inspired by a German nun?

Sister Maria Innocentia Hummel’s charcoal and pastel artwork from the 1930s were the inspiration for the porcelain figures called Hummels.

Many of the pieces are highly collectible today. A 15-piece Nativity scene is a valuable collection displayed in December at St. John Center in Little Rock. The nativity was originally owned by the late Bishop Andrew J. McDonald and donated by him to the diocese.

Sister Maria Innocentia, who was born Berta, became interested in art at a young age and received formal training at the Academy of Applied Arts in Munich. Even though she was asked to join the teaching staff at the academy, she chose to become a Franciscan sister.

In the convent, Sister Maria Innocentia was encouraged to continue her art and she soon became well known for her portraits of children. The drawings were reproduced on postcards and calendars and eventually on figurines made by the Goebel porcelain factory. Every figure is etched with “M.I. Hummel.”

Hummel figures became collector’s items from the start, with the artist reserving the right to approve the clay models for quality control. She relied on a familiar environment for her artwork. For example, her drawings of the Madonna are said to bear a strong resemblance to her mother.

Sister Maria Innocentia died of tuberculosis in 1946 at the age of 37.

According to the M.I. Hummel Club, the figures are still produced at the factory in Rödental, Germany, where they have been made since 1935. The Convent of Siessen, where the nun lived and worked, continues to oversee production “to ensure that the ceramic figurines are closely aligned with her drawings,”

A family in Zug, Switzerland, who owned one of the largest Hummel collections, wanted a place to exhibit the work in the United States. The collection was lent to a Hummel museum in New Braunfels, Texas, a German community, which was open from 1992 to 2001.