Bishop Sartain says prayer and healing will be priorities

Knowing prayer intentions 'helps me to know their hearts' 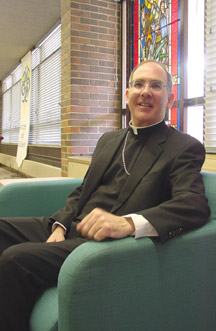 ROMEOVILLE, Ill. -- Bishop J. Peter Sartain was clearly filled with joy and excitement May 16 after fielding questions from a pool of reporters following his introduction by Bishop Joseph L. Imesch as the man who would be installed the next bishop of Joliet. Exhibiting his southern hospitality, he warmly greeted the Catholic Explorer, the weekly newspaper for the Diocese of Joliet, with a wide smile and welcomed the opportunity to spread the good news.

Bishop Sartain listed some of the future goals he has for the diocese, including a plan to foster unity, to promote healing and to encourage prayer.

"I see myself as a bridge. ... I think I should be encouraging relationships between people, so they can work together, so it's not just a matter of people relating to me," he said. "But I should help people relate to one another in a way that helps bring them to God."

One practical task he has included on the top of his "to-do" list is to start accepting submissions of prayer intentions from the people of the Joliet Diocese. The 53-year-old bishop began the practice in Arkansas about four years ago and found real success.

"First, it's part of my vocation to pray for them and I feel that's important," he said. "Secondly, it helps me to know the people, because they have a deeper sense of that's what I'm supposed to do. It's what they want me to do, and it helps me to know their hearts, and what are the struggles they have. So not only do I pray for their intentions, but as I look at the needs of the diocese, I know in a more personal way what the needs are."

Another practical outreach that Bishop Sartain expressed an interest in continuing is his weekly column in the diocesan newspaper. Since becoming bishop in 2000, he has published his thoughts on a variety of issues in Arkansas Catholic. Selected columns published in his first five years as bishop were compiled into a book, "Of You My Heart Has Spoken." The title is also his motto as a bishop.

He told the Explorer, "I love to write. I use my column as a window to address (timely and complicated) things. One of the things I tend to be able to do is explain complicated concepts in simple ways."

A native of Memphis, Tenn., he traced his desire to catechize the flock to his days as a parish priest, beginning in 1979. He was ordained to the priesthood July 15, 1978, in the Diocese of Memphis and earned a licentiate of sacred theology from the Pontifical Anthenaeum San Anselmo in Rome. After returning to the United States, he served at several parishes as associate pastor and pastor in Memphis. He also acquired administrative experience as director of vocations, chancellor, moderator of the curia, vicar for clergy and vicar general for the Diocese of Memphis. He served as diocesan administrator from September 1992 to May 5, 1993, and served as vicar general of the Memphis Diocese until he was installed March 6, 2000, as bishop of the Little Rock Diocese.

Over the last few years, Bishop Sartain has served as a leader of the Church at the national level in various positions with the United States Conference of Catholic Bishops. He is currently a member of the Administrative Committee of the USCCB and chair of the USCCB Committee on the Home Missions, among other posts.

The bishop said he learned many lessons over the last six years as the bishop of a mission diocese with just over 100,000 Catholics.

"I've learned through the years that every parish has something to offer other parishes about what it means to be a good parish," he said. "And small parishes can teach large parishes wonderful things. Large parishes can assist in small parishes. That interaction with parishes, I think, helps the life. And it's also, I think, important for me as bishop to try to encourage as much as possible a sense of unity as a diocese. Catholics are not congregational. We belong to a universal Church, and so to help people understand what that means is really important."

Another issue he intends to shed light on is the Church's attitude about justice as it concerns the ramifications of immigration reform. The bishop, who admits he is still learning Spanish, comes from a diocese with a significant immigrant population. He said diocesan ministries in Little Rock are working on several outreach efforts, including two immigration offices.

"I've learned from them the multiple issues the immigrants face, the multiple personal issues they face, and I need to bring that with me," he said. "I've learned the importance of respecting cultures, and finding ways to help those cultures preserve their spirituality, and then to enrich the Church where they come."

Along with the matter of immigration reform, Bishop Sartain expressed a concern for future vocations. He articulated a desire to be a strong supporter of vocations in the Joliet Diocese and briefly shared his own call to the priesthood. The youngest of five children credited his family and St. Paul Church in Memphis with inspiring his vocation. His parents, Joseph Martin "Pete" and Catherine Sartain, befriended many priests who eventually cared for them before they died. He also attributed his family's openness to the possibility of vocation for inspiring his sister, who is a Dominican Sister of St. Cecilia. Meanwhile, the example of his aunt's vocation to the religious life also encouraged him, he said.

Certainly, prayer is seen as an important path toward inspiring future vocations, he said. Bishop Sartain said he tries to encourage everyone to nourish their prayer life in the way in which three of his favorite role models had done so adeptly. St. Thomas More, Blessed Pier Giorgio Frassati and Blessed Karl Leisner, he said, found ways to make prayer the center of their lives regardless of their circumstances.

"That's what I always try to do is to encourage people to learn how to make prayer the center of their lives," he said.