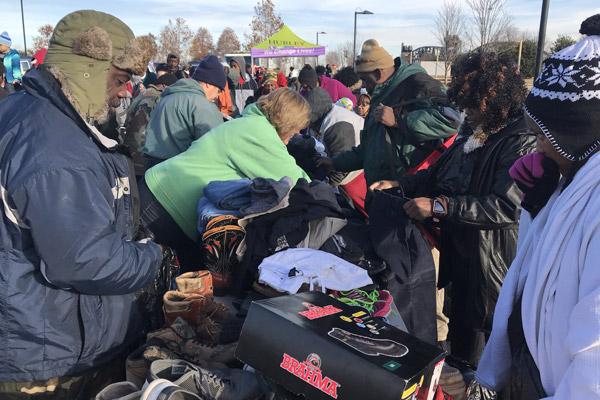 Volunteers from area churches and organizations help homeless or low-income clients find needed clothes during the annual Christmas Caravan Dec. 16 in downtown Little Rock. The caravan was coordinated for the first time this year by Immaculate Conception Church in North Little Rock and St. Mark Baptist Church in Little Rock.

Volunteers from area churches and organizations help homeless or low-income clients find needed clothes during the annual Christmas Caravan Dec. 16 in downtown Little Rock. The caravan was coordinated for the first time this year by Immaculate Conception Church in North Little Rock and St. Mark Baptist Church in Little Rock.

For most children, Santa Claus lands his sleigh on the rooftop Christmas Eve, delivering toys to open Christmas morning. But for homeless or low-income families, Santa came early, riding on a fire truck along with a parade of motorcycles Dec. 16 to the Clinton Presidential Library parking lot.

It was 13th annual Christmas Caravan, an event that hands out toys and clothes to those in need. There are no sign-ups, no checking identification or asking for proof of income. It’s a show of good faith and the chance to directly give back to the community. This year, about 1,500 people received toys, clothes or other needed items.

It is the first year the caravan was coordinated by Immaculate Conception Church in North Little Rock and St. Mark Baptist Church in Little Rock. Immaculate Conception parishioners Christie Powell, youth director, and Bobby Glennon, helped organize the caravan after Sandra Wilson, who is not Catholic and has been a homeless advocate since 1992, decided she could no longer coordinate it.

“She is a woman with the heart the size of Texas … this was definitely her dream,” Powell said. Wilson brought Immaculate Conception and St. Mark together and the two made sure the caravan continued.

“St. Mark, they’re out there on a daily or weekly basis, feeding, helping the homeless. They’ve got boots on the ground and they know the terrain,” which was an invaluable part of making this year’s caravan go smoothly, Glennon said.  The night before the caravan, Father John Wakube, pastor of Immaculate Conception and Outreach Pastor Glenn Hersey of St. Mark blessed the parking lot.

Glennon, who participated four years ago, said the biggest change was going from informal to much-needed structure. When he volunteered four years ago, clients were in the parking lots while trailers of donations were arriving. It caused immediate chaos.

“We didn’t even get the doors of the trailer open when fist fights broken out,” Glennon said of what happened years ago, remembering vividly a young boy on his father’s shoulders, devastated knowing that they were not going to receive any gifts. “We can’t do this again; everyone has to have a chance.”

Barricades were placed around certain areas, including “Toy Land” where volunteers handed out toys, rather than a free-for-all.

The parking lot was also closed off to the in-need or homeless clients until 9 a.m., giving groups who arrived around 7 a.m. the chance to set up tables. About 20 groups actively participated, with another 20 involved in some way, including collecting donations prior to the caravan, Glennon said.

Parishes who participated this year include Our Lady of the Holy Souls in Little Rock, Immaculate Heart of Mary in North Little Rock (Marche), St. Jude in Jacksonville and St. Rose of Lima in Carlisle.

There were also about four groups that served breakfast to about 600 people.

“When someone said I need a coat for a 3-year-old boy, we knew where it was and could get it for them,” Glennon said.

Tom Navin, former director of social action and prison ministry for Catholic Charities of Arkansas, came from Cincinnati to reprise his role as Santa.

“He came in just for this event. He was afraid I wasn’t going to call. It means that much to him. He’s been Santa for years,” Powell said. Children who visited Santa were given handmade quilted stockings from the Arkansas chapter of Quilts for Kids, full of candy and toys from the Immaculate Conception Arts and Crafts Guild.

From Immaculate Conception alone, there were about 100 volunteers, including those in youth ministry.

“In years past I’ve had the kids in my youth group give the shoes off their own feet,” to people in need, Powell said, who has participated for about 12 years along with her family.

Glennon’s 10-year-old daughter Amy said her favorite part of the caravan was, “Giving out blankets and the toys for the people that needed it the most.”

He said handing out gifts with his daughter was an opportunity to show why giving is so important.

“It’s where you receive more than you give. You’re the one that goes home with the gift,” Glennon said. “… There’s really no way to describe it. You’re changed when you go home.”

While making sure everything went smoothly was key, it couldn’t be done without loving hearts.

“Your job today is to love, to be a smile and be kind. We’re not here to judge, not here to second guess,” Powell said of what was told to volunteers.

Powell said God always provides, even when it looks as if there is nothing more to give. In one of the early years, Powell remembers a man needing clothes for his six children for Christmas.

“I really thought I was going to throw up because we had nothing,” except for a small box of odds and ends that was just given to Powell. But one by one, sizes that ranged from a toddler girl to a boys size 16 were pulled from the box. “Before it was over, all six items were in this box … he was so happy he got his children’s Christmas out of that crappy little box. You tell me that wasn’t the hand of God to make that happen. It’s kind of been my driving force. I’ll never forget that as long as I live.”

It’s moments like that every year that solidify the need to keep the Christmas Caravan going.

“God led us to this event,” Powell said, with Glennon adding, “On this day, in this parking lot, you can’t help to be changed … The next time you walk by someone in need, you’re not just going to walk by. You’re going to stop and help.”