Dicastery for Laity has special section devoted to sports, values seen in competition 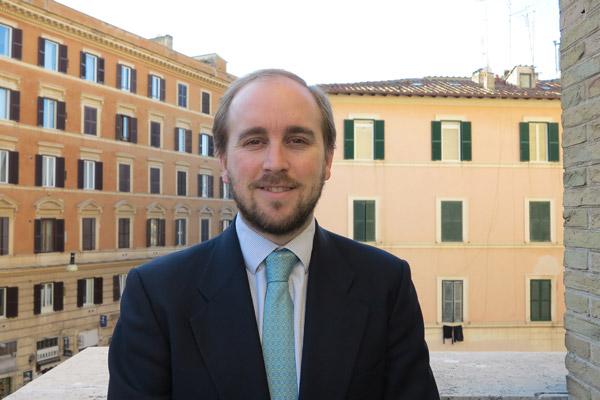 CNS photo/Matthew Fowler
Santiago Perez de Camino, head of the church and sport section of the Dicastery for Laity, the Family and Life, stands outside his office in Rome Dec. 6. Perez organizes international seminars at the Vatican and maintains important relationships with organizations, such as the International Olympic Committee and the Council of Europe, to promote values through sports.

CNS photo/Matthew Fowler
Santiago Perez de Camino, head of the church and sport section of the Dicastery for Laity, the Family and Life, stands outside his office in Rome Dec. 6. Perez organizes international seminars at the Vatican and maintains important relationships with organizations, such as the International Olympic Committee and the Council of Europe, to promote values through sports.

VATICAN CITY (CNS) -- After more than four years in office, Pope Francis probably has one of the world's largest collections of authentic soccer-team shirts. He receives them and other sports paraphernalia during meetings with pro athletes where he encourages them to be models of virtue for their younger fans.

But the high-profile visits are just a hint of the work the Vatican does each day to promote values that should shine on and off the field.

Since 2004, the Vatican office now known as the Dicastery for Laity, the Family and Life has had a special section dedicated to sports. Santiago Perez de Camino, a 31-year-old Spanish layman, heads the office.

Perez studied law at the Complutense University of Madrid, his hometown. He specialized in international relations, hoping someday to become a diplomat for the Spanish government.

Perez said his role as head of the Vatican sports and culture section has a "practical and diplomatic" purpose as he strives to build relationships between the church and the sports community.

One of those relationships is with the International Olympic Committee. For the 2016 summer games in Brazil, "we worked very closely with the Archdiocese of Rio de Janeiro and the IOC to allow all the Catholic chaplains who travel with the national teams -- like Poland, Italy, Germany, Austria, etc. -- to enter into the Olympic Village. We also worked to promote the construction of the chapel inside the Olympic Village after receiving funding from Adveniat, a German foundation."

But the office also promotes and organizes initiatives on a much smaller scale, events that "evangelize and form values and virtues within younger generations though the practice of sport," he said. "One of the programs I like the most was the 'Holy Land marathon,' which was a race that we used to organize from Bethlehem to Jerusalem." The race brought together Christians, Muslims and Jews, providing a forum for interreligious dialogue and "to promote Christian ideals in society through sports."

Sports are a "unique tool to connect society and the church," he said.

The church must connect with society through popular culture such as music, art and sports, he told Catholic News Service in late November. "The church must be like a battlefield hospital. It must go to the peripheries and to the people, not expect the people to come to the church," he said.

As a "diplomat," Perez also organizes international seminars at the Vatican to promote values through sports. For example, the seminar in 2015 explored the role of coaches in the formation of the new generation of athletes -- both amateur and professional.

The role of coaches in the lives of athletes is important because of how often the two sides interact, said Perez. Coaches have the ability to be a role model, or "just the opposite," depending upon their behavior.

Perez also maintains highly important relationships with organizations such as the United Nations, International Olympic Committee and the Council of Europe. These relationships allow the church to promote practical guidelines that emphasize the respect of human dignity and Christian values.

Before he became head of the church and sports section in 2013, Perez worked for the World Youth Day 2011, which was held in Madrid. He said he was a "link between the Spanish government and Holy See," and that is where the Vatican first noticed Perez. Then came a thorough interview and vetting process.

"It doesn't happen every day that you have a cardinal as your boss," he said, regarding his Vatican job.

Settling into the position was a bit rocky at first, he said. His predecessor was gone before Perez arrived at the office, so there was no overlap and no chance to brief him on his duties.

"Fortunately, the environment inside the office is incredible," said Perez. "We are like a family here and everybody is open to helping you and giving advice. Everyone was willing to help anyway they could."

Perez said he is grateful for the challenges of his job because he learns new things about the church each day and the position has shown him a "larger vision of the Catholic Church."

One of the most important things he has learned, he said, is that the Catholic Church in different countries has different ways to connect with people.

"It gives you a totally different perspective of what the Catholic Church is and what we are doing to make society better," he said.