Educators honored for commitment to their parishes; bishop gets standing ovation 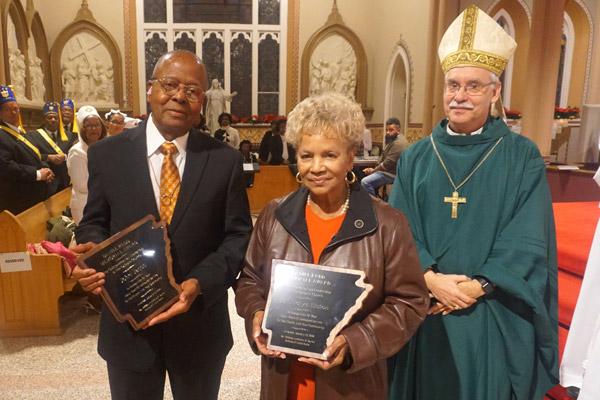 Two Catholics in central Arkansas were honored Jan. 13 with the Daniel Rudd Award from the Diocesan Council for Black Catholics. Bishop Anthony B. Taylor celebrated the Martin Luther King Jr. Memorial Mass at the Cathedral of St. Andrew in Little Rock and handed out the awards to Jo Evelyn Elston of Our Lady of Good Counsel Church in Little Rock and John Jacob of St. Peter Church in Pine Bluff.

Elston joined the Church 45 years ago and has served as a lector, Eucharistic minister and DCBC board member. She is a school counselor in the Little Rock School District.

Jacob is president of the parish council in Pine Bluff and has served as an usher and lector. In addition to being a teacher and principal in the Pine Bluff School District, he was the principal of St. Peter School for two years. He celebrated his 80th birthday on the same day as the MLK Mass.

“Even after a bout of serious illness, he continued to serve his parish and community,” Bunting said.

Bishop Taylor got a standing ovation after his homily. He said Dr. King has been one of his heroes and “one of the greatest Americans who ever lived.”

“I join you and a majority of Americans in rejoicing that such dreams really can come true and that progress has been made — we have now had a two-term African-American president — but we must not overlook the fact that much of Dr. King’s dream still remains unrealized for far too many people still trapped in lives of poverty and hopelessness — dreaming alone does not make dreams come true. We still have a long way yet to go and recently we have lost a lot of ground.”