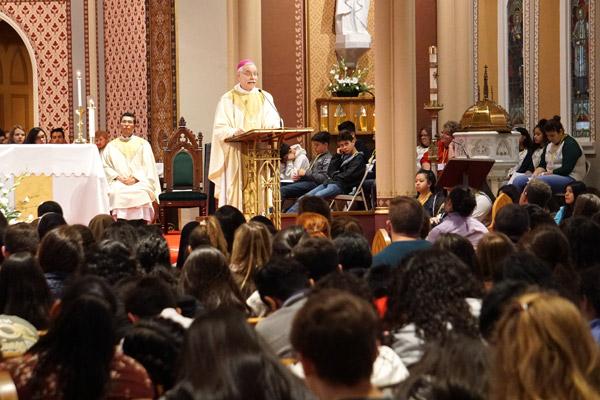 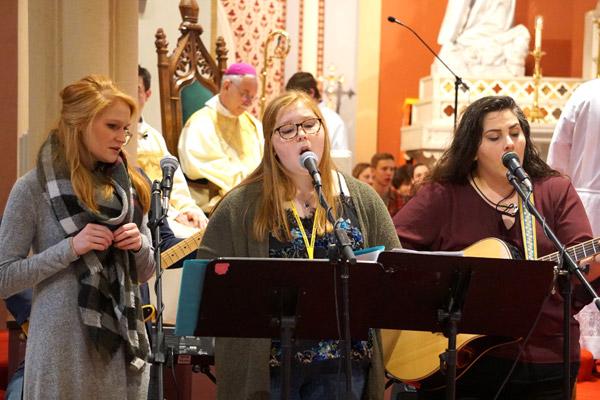 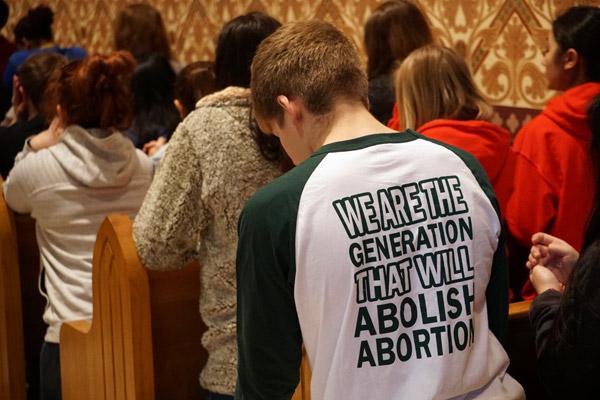 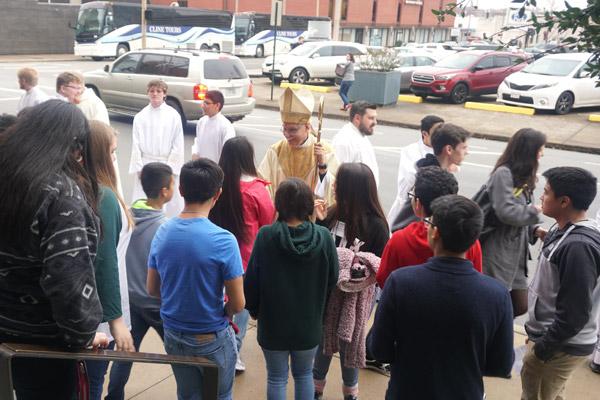 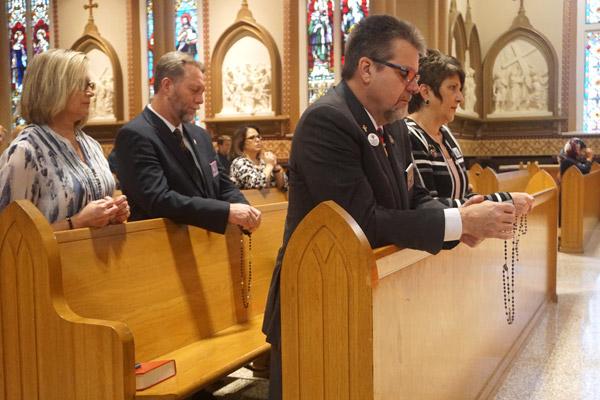 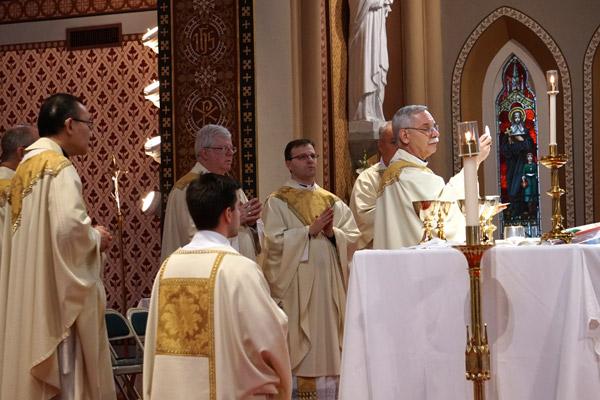 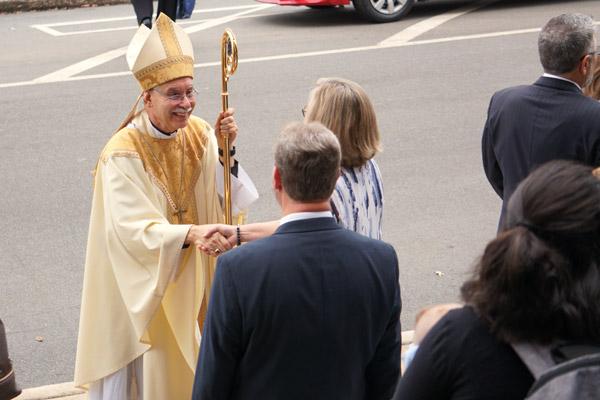 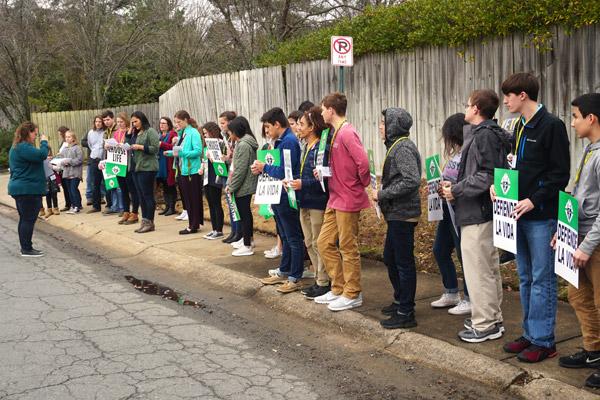 Bishop calls for consistent pro-life stand at Mass for Life

‘Anti-abortion’ advocates also need to support mercy for the powerless 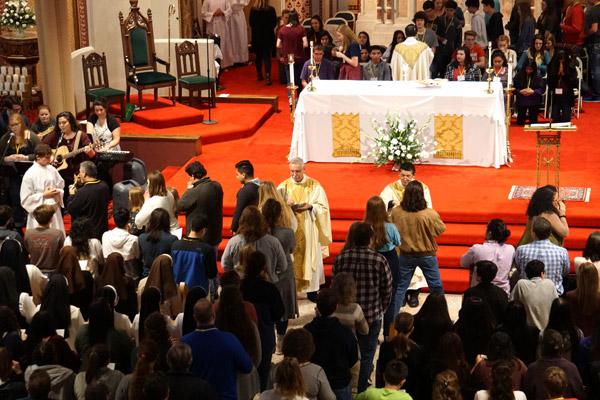 Malea Hargett
Bishop Anthony B. Taylor and Father Toshio Sato, CM, of North Little Rock distribute Communion during the Mass for Life for youth Jan. 21 at the Ca-thedral of St. Andrew. More than 700 teens and chaperones packed the church for Mass following their Weekend for Life activities.

Malea Hargett
Bishop Anthony B. Taylor and Father Toshio Sato, CM, of North Little Rock distribute Communion during the Mass for Life for youth Jan. 21 at the Ca-thedral of St. Andrew. More than 700 teens and chaperones packed the church for Mass following their Weekend for Life activities.

Being ‘pro-life’ means supporting a consistent ethic of life

Youth unite for broad pro-life view at Weekend for Life

In a stand for the sanctity of all life, Bishop Anthony B. Taylor emphasized that Catholics are called to have a “consistent ethic of life,” to support pro-life efforts from conception to natural death.

In his homily at the annual Mass for Life Jan. 21 at the Cathedral of St. Andrew in Little Rock, he said, “I think we all know that our opposition to abortion is absolute — no need for me to go on about that — indeed, that’s the main focus of this Mass,” Bishop Taylor told a packed Cathedral in two separate Masses. “But then there are also so many people who call themselves pro-life but really are not. They are merely anti-abortion and are not the least bit merciful when it comes to those who are poor, vulnerable and powerless but already outside the womb. They lack a consistent ethic of life.”

The Mass for Life and a youth Mass marked the 45th anniversary of Roe v. Wade, which legalized abortion in the U.S. The youth Mass was the culmination of the annual Weekend for Life retreat that drew 600 teens from 33 parishes throughout the state.

In 2016, the latest available data, there were 3,207 abortions in the state, according to the Arkansas Department of Health. Last year, Arkansas carried out the death penalty for four men on death row after 12 years of no executions.

“We are resolute in our opposition to abortion, but there are other pro-life issues that are important too and boy do we have our hands full.” Bishop Anthony B. Taylor

Bishop Taylor chose not to participate in the Jan. 21 March and Rally for Life, sponsored by Arkansas Right to Life, because the rally’s keynote speaker, Attorney General Leslie Rutledge, worked vigorously to secure the executions, despite oppositions from local and national organizations and religious entities, including the Diocese of Little Rock. Arkansas Right to Life refused a request from the bishop to find a more appropriate pro-life speaker.

The pro-life movement for Catholics follows Church teaching of protecting life from conception to natural death, speaking out against practices like abortion, the death penalty and euthanasia, as well as protecting the human rights of immigrants and refugees. Bishop Taylor said in a Jan. 17 letter that the faithful were free to participate in the march, but the diocese would not promote the march or rally.

In April, prisoners Ledell Lee, Jack Jones, Marcel Williams and Kenneth Williams were killed within seven days of each other. Gov. Asa Hutchinson, with support from Rutledge, scheduled eight total executions, starting the day after Easter.

Bishop Taylor addressed in his homily why he would not attend the march, while not dissuading anyone who wanted to attend. He spoke of his pro-life efforts of more than 40 years, including marching in Washington D.C. in 1976, the third anniversary of Roe v. Wade. He referenced the “ruthless assault” on powerless people this year, including deporting immigrants and refugees, racial rhetoric, cutbacks on health care, tax policies benefiting the rich and character assassinations on Twitter and throughout the internet.

“… Silence in the face of hateful behavior, these are pro-life issues too — anything impacting the life and dignity of the human person from the first moment of conception all the way to natural death and every stage in between. This is what a consistent ethic of life entails,” Bishop Taylor said. “Abortion is huge and we are resolute in our opposition to abortion, but there are other pro-life issues that are important too and boy do we have our hands full. This is not an either/or situation; it is a both/and situation.”

Zach Harrison, 25, attended the Mass, clad in a blue T-shirt stating “The more helpless the victim, the more hideous the crime.” His family, members of St. Mary Church in Arkadelphia, sat up front, his wife swaddling their 3-month old son Heath, while Happy, 3, and his sister Maddy, 2, were fascinated with their small toys. Harrison said his family would attend the march, but not the rally.

“I understand both sides of the issue. I thought they were fair,” Harrison said of the bishop’s statements. “Pro-life to me means pro-family.”

Waylon Metoyer and his wife Jazmine, who worship at the Cathedral, sat in the back with their son Jett, almost 5 months old.

“It was great that he was honest with the congregation and I think everyone respects that. That’s what they teach us, so he went with what God ultimately wanted,” said Jazmine Metoyer, with her husband adding that for him, being pro-life is “respecting humanity in all regards and like he said, some people might just be anti-abortion but it goes deeper than that; taking care of all people no matter race, their backgrounds, financials.”

Pax Christi Little Rock, a chapter of the national Catholic social justice organization that promotes peace, actively protested the April executions and also chose not to participate in the march.

“We understand that the March for Life is for a very good purpose and that it stands up for the sanctity of life, for the unborn and that’s so important,” said Sherry Simon, president of Pax Christi Little Rock. “Our only point that we want to make with that in solidarity with the bishop is that we want to make it clear in this new day that we have to be aware of the consistent ethic of life. That life is sacred from beginning to end.”

The Knights of Columbus State Council also pulled out of participating in the March for Life. Their annual lunch event, normally in North Little Rock following the march, was moved to the Cathedral’s McDonald Hall after the Mass for Life.

“What if you’re a mother and your son or daughter kills someone,” he said, adding it was a question discussed with his brother knights. “What are you going to do if your children did something wrong? … We’re not the judges; God loves all of us.”

“I think for us it’s an appreciation for how precious life is” and the sadness of life lost, Cinnamon Mathews said.

“People on death row or babies getting aborted don’t have a chance at life,” Andrew said, adding, “I think everyone deserves a chance.”

Liz Tingquist, director of the diocese’s Office of Youth and Campus Ministry, said some participating in the Weekend for Life attended the March for Life, but everyone had planned to skip the rally held at the capitol steps.

At the youth Mass preceding the Mass for Life, the Cathedral overflowed with 700 youth and chaperones, filling the pews and chairs set up on the altar, on the sides and in the back. Following Mass, the youth gave a standing ovation for Bishop Taylor, after Tingquist emphasized the courage it took to stand for all life.

Pro-life shirts dotted the congregation; most poignant were white and green shirts from St. Jude Church in Jacksonville, stating on the back “We are the generation that will abolish abortion.”

What spoke most to Christian Boekhout, 17, a member of St. John Church in Hot Springs and a member of the diocesan Youth Advisory Council, was the bishop’s words about how “everything is possible with God.” It’s a common truth, but being reminded in a time when the fight against abortion means to “break through a changing culture” was inspiring, Boekhout said.

“Having a speaker that’s adamantly pro-death for criminals is not really a pro-life speaker,” Boekhout said, who attended the march but not the rally.

Peyton Wilson, 17, a member of St. Raphael Church in Springdale and co-chair of YAC, said watching the Gospel message of the Weekend for Life resonate in the hearts of her fellow teens was powerful. The event was also an opportunity to learn more about the complete pro-life message.

“I’m learning more every day, and I feel having such an important leader pushing the youth toward really wise decisions is super important,” she said, adding that she appreciated Bishop Taylor leaving the choice up to the faithful on whether or not to attend the march and rally.

Jennifer Briselden, youth minister at Christ the King in Fort Smith, took 16 youth from her church and Sacred Heart Church in Barling to pray in front of the Little Rock abortion clinic instead of going to the march. Others followed their lead, including youth from Booneville and Mountain Home.

“I think we need to be consistent and value the sanctity of human life in general, not just before they’re born,” said St. Peter parishioner Amy Farmer, who has three adopted daughters.

Briselden said the move was “to support our bishop and to learn and educate our kids that even if it’s uncomfortable with society, it’s important to stand up for our faith.”

In 2014, Briselden, also the campus minister at the University of Arkansas-Fort Smith, was the keynote speaker at the March for Life. She had detailed her experience as a young unwed mother who eventually chose adoption for her son rather than an abortion. She met her biological son Trevor, who lives out of state, that same year, while both attended the Steubenville Catholic youth conference.

Briselden told the youth on Sunday that when she was pregnant with Trevor, she called that same abortion clinic in Little Rock to schedule an appointment.

“I couldn’t do it. To me I knew immediately I’d be killing a baby,” she said.

She added that praying the rosary at the clinic “was a great blessing, kind of going full circle.”

Being ‘pro-life’ means supporting a consistent ethic of life

Youth unite for broad pro-life view at Weekend for Life