A different joy than she had planned 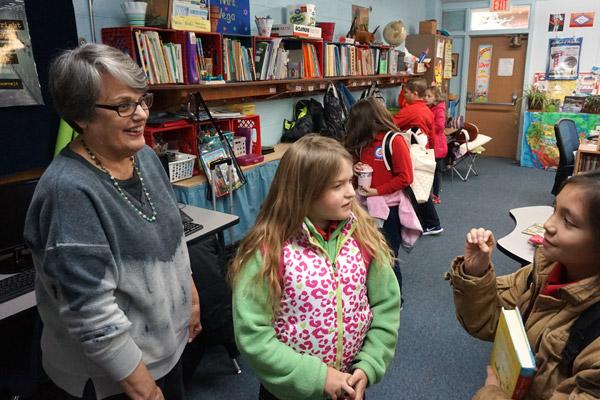 Aprille Hanson
Junior Vega, third-grade teacher at St. John School in Russellville, listens to student Makili Hardman, 9, (right) and Savannah Key, 8, at the end of the school day Jan. 8. Vega has been a teacher for about 50 years.

Aprille Hanson
Junior Vega, third-grade teacher at St. John School in Russellville, listens to student Makili Hardman, 9, (right) and Savannah Key, 8, at the end of the school day Jan. 8. Vega has been a teacher for about 50 years.

RUSSELLVILLE — Junior Vega beams with pride as student Makili Hardman, 9, shows the mobile she made of the U.S. branches of government, naming each as her teacher smiles.

It’s the little moments like this that show Vega’s quiet compassion for her students: when she prompts students to put away their supplies at the end of the day by saying “SOS,” “super organized student”; naming all the brothers, sisters, and parents of current students that she also taught years before and what they do now; pointing out photos of former students in her classroom and sharing their accomplishments; and recalling how she kept a rock with the words “I love you” for years from former student Andrew Pollack, who was killed in an ATV accident at age 24 in August. She gave the rock to his mother.

“I have this basket I put in notes that the kids give me, I call it my nursing home basket. But I don’t really want to be there,” Vega, 75, laughed. “I keep student’s notes; misspelled, sweet, from the heart.”

Vega, a cradle Catholic, has been a Catholic school teacher for about 50 years, teaching at St. Michael School in West Memphis and for the past 25 years, at St. John School in Russellville.

“It just feels warm and wonderful. We can talk about God anytime we want to and we can bring him into anything,” Vega said. “When we talk about rules, it’s all about being kind and relationships with others. We can talk about, ‘Is that what Jesus would do?’”

It was never her dream to teach. She was born to Craig and Margaret Ellen Bailey, who called their daughter “Junior” despite being a girl. Her father died in a car accident when she was just 10 years old and she wanted to follow in his footsteps to become a lawyer.

However, there were no other women in pre-law classes and instead, she earned a bachelor’s degree in English and political science from the University of Central Arkansas in Conway in 1962. In her dorm room, she saw an advertisement for teachers and applied for junior high in Wilson (Mississippi County). She later earned a master’s degree in education from the University of Memphis.

Once while driving with her convertible top down, all her students’ homework flew out of her car, scattering across a cotton field. It was a tough year, Vega admits, but she found her calling in Catholic education.

Teaching third grade at St. John, where she attended school through eighth grade, Vega always reads to her students and has a love for literature and social studies.

“They can say the Preamble (to the Constitution). Because I think that’s important and not many people know it. I had a father who’s a policeman and he said, ‘You know I don’t think I could say the Preamble, but (my son) can,’” she laughed.

To help students understand immigration in a real-world context, Vega brings in speakers who have shared stories of parents who emigrated from Europe to modern stories of coming from places like El Salvador and Mexico.

“When I teach them, I want it to become part of their life. I want them to remember, not just the facts and things, but the overall picture, like if you’re teaching about immigrants — there are immigrants today and we want to be welcoming,” she said.

It’s important to Vega that every student who comes to her classroom feels special. This year, student David Ray, who has Down syndrome, has been a highlight of her classroom, she said. He enjoys doing different tasks, like watering her plants, and the phrases he says, “You’re welcome” with a drawn out “wel” or before taking a photo saying “cheese and pickle sauce,” is something all her students have adopted. David’s mother Susan Ray said the school and Vega, who has taught three of her six children, has been a blessing.

“You just see how much she loves him and tries to help him get to his greatest potential, but she does that with every kid,” Ray said. “She meets the child where they are, whether they’re above level or below level.”

Vega said she’s blessed that her daughter Mary Anne, one of her four children, is able to care for her husband, Raymond, who has suffered from dementia for about five years. It allows her to keep doing what she loves.

“I’m always excited about coming. I don’t mind getting up early in the morning. I know I’m 75 now, but I get up early and I hardly miss ever,” she said.

She hopes to teach as long as she’s able and wants to live out this quote: “I’ll always help you to be who God made you to be.”

“I hope they’ll remember that I taught them to love literature and to want to read, because they’re reading all the time, they’re always reading something,” Vega said. “I want them to remember that everyone’s important and to be kind to everyone and find the good in everybody.”

SEE MORE PHOTOS related to this story at Arkansas Catholic's Zenfolio page, and order prints if you like. You also can browse other photos taken by Arkansas Catholic photographers.
Click for the Catholic Schools Herald, January 2018 index

Adam Prince: Care for the family