Thanks in part to CASA donation, retreat center remodeled at St. John Center 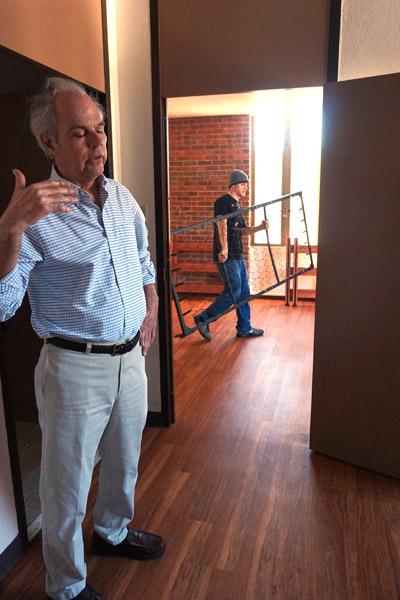 Faithful throughout Arkansas who have stayed at St. John Center in Little Rock for religious retreats, conferences or other events can expect a more comfortable, updated overnight facility thanks to a year-long renovation.

On Feb. 2, Fletcher Hall was ready to host its first group of guests, the diaconate formation class and Little Rock Theology Institute, since closing last January. Renovations to the 52-year-old building, totaling around $2.5 million in construction costs, included energy-efficient heating and air, new laminate flooring, paint, LED lighting and refurbished bathrooms. The old heating and air was the original 1965 system and no longer accommodated the needs of the three-story building.

Driedric said he was happy the project was able to stay on budget.

“You always have a surprise here or there, ‘this cost more,’ but where things cost more, we found savings in other places,” he said.

“With allocations from just one or two more CASA campaigns, Fletcher Hall will be completely paid for,” Bishop Taylor said in his Feb. 3-4 homily about CASA.

The building, named after Bishop Albert Fletcher, was a dormitory for St. John Seminary, which closed in 1967. It has primarily been used for overnight guests with renovations along the way, including private bathrooms in each room installed in 1991.

Fletcher Hall was also used all or partially for diocesan offices from 1998 to 2010 while other buildings on campus were renovated.

After the latest renovation, it can now accommodate about 220 overnight guests, instead of around 170, said Deacon Tim Costello, diocesan facilities manager and minister to deacons. There is also a room on each floor that can be used as a small meeting space or lounge.

Ahead of the project, Driedric spoke with diocesan personnel to see what improvements were most important to them and updated spaces and heating and air conditioning were top priorities.

“Really I think the big thing most of them wanted to see were better rooms — updated, cleaner, newer facilities,” he said.

“We’ve made the (former) lounge into a space that’s probably going to be one of the best meeting places on campus now,” Driedric said.

He said he was “very pleased overall with the project,” praising East Harding Construction and Odom Peckham Architecture in Little Rock for being “very responsive to the needs of the diocese.”

Typically, the building is booked for retreats and conferences 40 to 48 weekends a year. For more information, call Suzanne Giovannello, St. John Center reservations coordinator, at (501) 664-0340 or email .