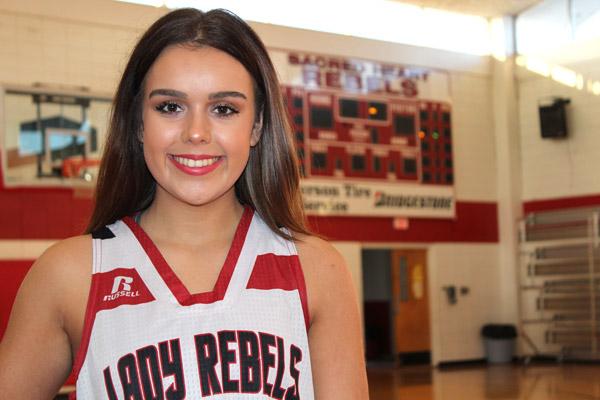 Dwain Hebda
Jenna Chadek, 16, completes an early morning walk-through before first bell at Sacred Heart School in Morrilton. The junior guard came back from heart surgery last year to compete for her school.

Dwain Hebda
Jenna Chadek, 16, completes an early morning walk-through before first bell at Sacred Heart School in Morrilton. The junior guard came back from heart surgery last year to compete for her school.

Jenna Chadek knows only one way to play basketball and that’s flat-out, aggressive and hard. It’s an attribute that, along with ability, has kept her in the starting lineup at every level of her career at Sacred Heart School in Morrilton, which for basketball means since the age of 5 and in softball since the age of 6.

“I don’t want to give some little girl a vision of that ball rolling on the floor and nine people are going after it, but Jenna’s going to stand back because she doesn’t want to get hurt, you know?” she said. “I really do all of it for the kids younger than me. I don’t want them to give up on themselves.”

Besides, she admits, “I still think I’m indestructible.”

Athletes like Chadek, who constantly stay in the fight no matter how long the odds, are said to have heart. Which in her case is ironic considering it’s her heart that very nearly put her on the sidelines for good.

Chadek, 16, noticed her heart reacted strangely during sports starting in middle school, something she shrugged off as simply how she was wired. By the time sophomore year rolled around, things had become more serious and at an early-season practice in 2016, Chadek’s heart finally got her undivided attention.

“I remember looking at Coach in practice one day and I was like, ‘Coach, I can’t breathe. I feel like I’m going to pass out,’” she said.

Through blurred vision, a shaky Chadek staggered to the bleachers, her jersey spasmodically jumping off her torso in time with the hammering of her heart literally beating through her chest.

“It was crazy what was happening. My heart rate was up to like, the 270s (beats per minute),” she said. “We went to a hospital right after that.”

Chadek visited cardiologists in Conway and Little Rock and, aided by medication and a heart monitor, kept playing ball. She was at practice when one of the specialists called her mother, Sonya.

“The day we played Wonder View he called my mom and said, ‘I know what’s wrong with her; you better get her off that floor,’” she recalled. “We’re in the middle of practice and my mom came running up to me and she was crying and she pulled me off.”

“I was upset because I felt like I was letting my teammates down,” Chadek said. “And it was just hard because I was out.”

“I told my team, ‘I promise you, I’m going to come back and you’re not going to know that I had heart surgery. I’m going to play harder than I’ve ever played before knowing that that could have been my last game when she pulled me off that floor.’”

Chadek made good on her word faster than anyone could have imagined, suiting up against St. Joseph High School in Conway less than three weeks after her surgery. While appreciating her intensity, head coach Kyle Duvall pulled the reins on his young guard, which ran him squarely into her headstrong nature.

“She’s one of those where she doesn’t want to come off the floor. It’s just that mentality, that attitude that she’s good to go and she wants to be out there,” Duvall said. “She’s very lively, very talkative. You always know how she’s feeling.”

“I think Coach was more worried about it than I was,” Chadek said. “He kept giving me breaks and I remember thinking, ‘What is he doing; am I playing bad or what?’”

“The first couple of games I was getting mad and I was like, ‘I’m crazy; I just went through heart surgery, he’s trying to protect me.’”

Coach wasn’t the only one. Leading up to her surgery Chadek, a member of Sacred Heart Church, learned how close God can feel in times of crisis and doubt.

“I’m not going to lie; you go through something and you don’t understand it, you question God. That’s just something you do. And it got to a point where I questioned God,” she said. “But then, I remember a ride to Little Rock for one of my visits, I just looked at my mom and I was like, ‘God’s got this. It’s in God’s hands.’”

“From there, I was like God does everything for a reason, God has a plan for me, God’s going to get me through this. And I just quit worrying about it. He’s got me.”

Chadek’s junior season hasn’t presented any further physical issues, but it hasn’t been easy either. The Lady Rebels have not had the year they’d hoped for and to an outsider Chadek’s risk of further health complications doesn’t square with the team’s limited success. But she doesn’t see it that way.

“(My cardiologist) said you can get back, but don’t be surprised that you have to go through (surgery) again. I said, ‘I’ll go through it again if I can get back out on the court and play,’” she said. “I just had to come back and show my team that we’re all strong and we can all get through anything.”