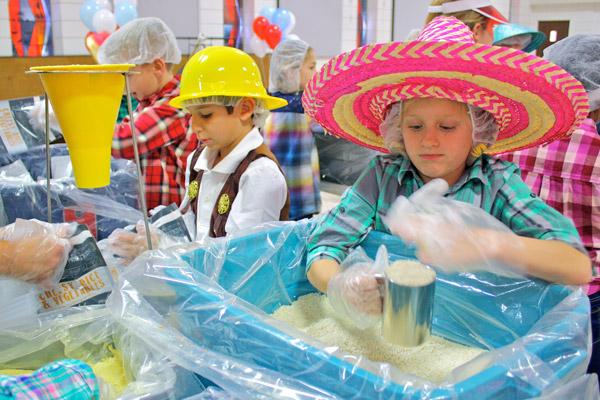 ROGERS — Not long ago, Meghan Estes was imagining how she might spend her birthday and decided she wanted to celebrate a little differently. It began as an idea and flourished into a class project.

Instead of accepting gifts, Estes wanted to give back. So Jan. 31, she and her classmates turned the idea into action and packed up around 5,200 ready-to-eat meals in a “Feed the Funnel” party organized by The Pack Shack.

The Pack Shack, a non-profit organization, arranges parties with groups, schools and businesses to help fight hunger and make an impact in local communities.

A party-like atmosphere set the mood with fun hats and dance music, as students were stationed at tables laden with bins full of rice, dehydrated vegetables, dehydrated cheese sauce and a proprietary soy protein mix with vitamin and minerals that creates a broth when mixed with water. They were then taught to measure, scoop and feed the funnel as they filled plastic bags with the proper amount of ingredients to make a meal for six to eight people with only the addition of water.

Realizing no party is complete without a gong to ring, The Pack Shack also provides their own gong for participants to ring when certain packing goals are achieved.

Ben May, party operation manager for The Pack Shack in Cave Springs, said the goal is to bring people together.

“We just want people to have crazy, fun packing up nutritious meals that stay local to help those in need,” said May.

This was the first time a party of this kind had been hosted at the school, but both teachers and students agreed it was a success.

“I couldn’t be more proud of these students,” said Heather Kordsmier, a third-grade teacher. “They are really showing true teamwork and making this project work.”

“I like helping people,” she said. “And cooking. I think it was a great birthday party.”

Only one thing made her birthday even more special.

“I got to ring the gong,” Estes said proudly of the day’s event.

The Pack Shack has been in operation since 2013 and has helped communities across the United States combat food insecurity by bringing together groups to pack meals that will be given out locally. With home bases in Cave Springs, as well as Columbus, Ohio, The Pack Shack can fulfill requests for any group, anywhere, at any age above 3 years old and could make as many as 40,000 meals in as little as two hours with 100 people.