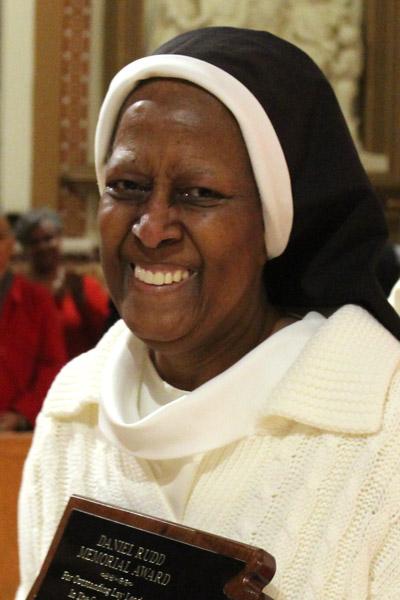 Sister Mary de Porres Polk, OSB, a sister for 49 years who worked at St. Bernard Medical Center and as an assistant liaison to the Diocesan Council for Black Catholics, died Feb. 1. She was 74.

She was born Barbara Lee Polk in Lafayette, La., to Henry and Dorothy Polk. Even though her mother was not Catholic, Sister de Porres told Arkansas Catholic in 2015 that she made sure the children attended Mass and religious education. Sister de Porres said she resisted her religious calling for 10 years until seeing Jesus during a priest’s homily.

She entered Holy Angels Convent in Jonesboro in 1967, professing first vows two years later. Sister de Porres was an LPN, working at the convent infirmary and St. Bernards Medical Center in labor and delivery for more than 20 years. She also served as subprioress under Sister Lillian Marie Reiter.

For 12 years, Sister de Porres was assistant liaison to the Diocesan Council for Black Catholics, based in North Little Rock. She was the only black member of her convent.

In 2008, she was diagnosed with breast cancer, undergoing year-long treatment. She was then cancer free for six years, but was diagnosed again in 2015.

That same year, she was a Warrior Women Wall of Fame honoree, which recognizes women who have survived breast cancer, by St. Bernards Imaging Outpatient Center in Jonesboro. In 2016, Bishop Anthony B. Taylor presented Sister de Porres with the annual Daniel Rudd Memorial Award, sponsored by the council, which recognizes Catholics who exhibit love of faith and leadership.

She is survived by one sister, Judith Lightfoot.

A rosary and visitation was held Feb. 4. A Mass of Christian Burial was Feb. 5, with internment at Mount Olivet Cemetery.

Former Jonesboro principal was a nun for 64 years