Mistakes happen in media, but readers need to look at intent of outlet, professor says 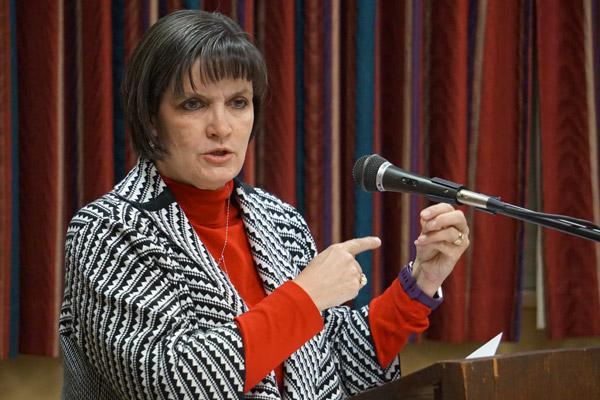 For more information about the rights and responsibilities of readers, viewers and of media outlets, read “News Consumers’ Bill of Rights and Responsibilities” at http://bit.ly/newsbillofrights.

Dr. Donna Lampkin Stephens, associate professor of journalism at the University of Central Arkansas in Conway, spoke to Pax Christi Little Rock members and guests Feb. 8 about the plague of fake news and how readers can differentiate fact from fiction.

Sherry Simon, president of Pax Christi Little Rock, a Catholic social justice group that promotes peace, said it was the largest group of attendees, more than 40, since the organization began holding monthly meetings with speakers last year. Several asked questions and other media professionals offered insight on the industry.

Stephens, who holds a doctorate in mass communications and freelances for several publications, emphasized that “alternative facts are not facts, they’re lies” in her presentation “Fake News and the Free Press.”

A free press is essential to a democracy though many Americans have lost faith in the media.

“We all have to fight this fake news. I think our democracy depends on it.” Dr. Donna Lampkin Stephens

“We all have to fight this fake news. I think our democracy depends on it,” she said.

Citing a Washington Post report on the Politico/Morning Consult poll released in October, 46 percent of registered voters believe major news organizations fabricate stories about President Donald Trump and only 37 percent believe the mainstream media does not invent stories, she said.

“As a journalist and a journalism educator, this grieves me and as an American. I think we all will grieve,” she said.

The poll also revealed 28 percent of Americans think the federal government should be able to revoke broadcast licenses of major news organizations if the government says they are fabricating stories about the president/administration. Only 51 percent think that government should not be able to do that, she said.

“How many of you all remember Watergate? This is stunning, scary, depressing.”

The concept of fake news is not new, she said, pointing out examples including the treatment of Southern media toward the northern media during the civil rights movement.

In the Bible, fake news can be traced back to the beginning. On Jan. 24, the feast of St. Francis de Sales, the patron saint of journalists, Pope Francis released a message for World Communications Day on the theme “‘The truth will set you free.’ Fake news and journalism for peace,” according to a Catholic News Service article.

The pope explained fake news mimics real news by using “non-existent or distorted data” and that the story of the serpent tempting Eve in the Garden of Eden is an example of a fake-news tactic.

“There is no such thing as harmless disinformation; on the contrary, trusting in falsehood can have dire consequences,” he said of what the Bible story conveys. He also praised educators for teaching youth about how to decipher fake news and warned those who share false information are “unwilling accomplices in spreading biased and baseless ideas,” the article stated.

Today, one of the biggest factors in the spread of misinformation “is an education problem,” Stephens said, adding that according to the University of Pennsylvania’s Annenberg Public Policy Center’s annual survey, 37 percent of Americans could not name one of the five rights guaranteed under the First Amendment.

Stephens cited Arkansas Democrat-Gazette columnist John Brummett who defined fake news in a January 2017 column as “making something up for partisan or sinister purposes and using the freewheeling nature of the Internet to get unsophisticated people to read, fall for and spread what you’ve made up.” It’s important to note “bad editorial judgment,” Brummett stated, is not fake news.

Because no one is perfect, when a mistake is made and quickly corrected by a media outlet, it’s important to understand it was not intentional to spread misinformation, she said.

It’s also important for readers to frequent multiple news sources, particularly mainstream media with minimal partisan bias like the Associated Press, BBC and NPR, rather than ones that only skew conservative or liberal.

Here are some tips Stephens gave and read from student responses on how news consumers can protect themselves from fake news:

• Develop a “BS” meter; “Don’t just believe what you see,” Stephens said. It’s important to research multiple trusted sources rather than believing the first thing that’s read. “I tell them don’t be cynical, but you should all be skeptical.”

• Seek out professionally trained journalists and media outlets that have a code of ethics and reputation for quality news. Search for the “about us” section and contact the media outlet by phone or email.

• Examine evidence and question a source’s credibility, which means fact-checking and “ask yourself, ‘is this logical?’ ” one student response said.

For more information about the rights and responsibilities of readers, viewers and of media outlets, read “News Consumers’ Bill of Rights and Responsibilities” at http://bit.ly/newsbillofrights.