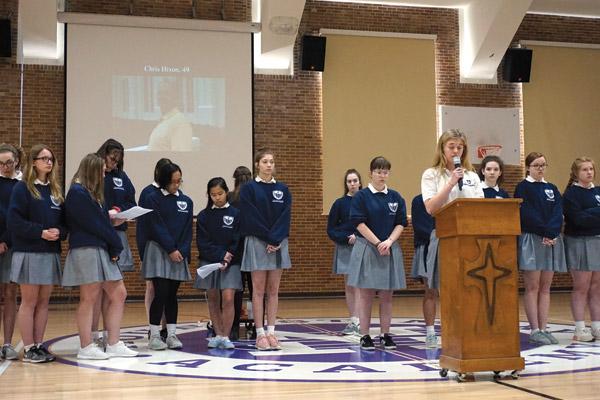 Aprille Hanson
Mount St. Mary Academy sophomore Caroline Potts, 15, shares about athletic director Chris Hixon, who was killed at Marjory Stoneman Douglas High School in Parkland, Fla. On March 14, a month after the Florida shooting, A.P. U.S. History students at MSM organized a prayer vigil and shared about each of the 17 victims.

Aprille Hanson
Mount St. Mary Academy sophomore Caroline Potts, 15, shares about athletic director Chris Hixon, who was killed at Marjory Stoneman Douglas High School in Parkland, Fla. On March 14, a month after the Florida shooting, A.P. U.S. History students at MSM organized a prayer vigil and shared about each of the 17 victims.

In a gym typically echoing the sounds of cheering crowds and athletes’ shoes pounding the floor, the silence instead was deafening as Mount St. Mary students sought to achieve a greater victory — to pray, remember and encourage fellow students to work to save the lives of kids just like them.

Sophomores from the Advanced Placement U.S. History class read the names of the 17 victims of the Marjory Stoneman Douglas High School shooting in Parkland, Fla., on the one-month anniversary of their deaths.

“Lord, let us always keep before us what tragedies like this do to our nation. Let us remain aware that love and peace prevails over violence and evil. May we remain vigilant and know we are called to action to stop these senseless acts and to let us find the strength to make our country worthy of the memories of those who have been taken from us so suddenly,” student body president senior Stephanie Verdaris, 18, prayed in part to open the vigil.

Students across the country took part in a variety of demonstrations, from walk-outs to prayer services, to both honor the victims and protest gun violence and advocate for sensible gun reform.

“I think it was very heartbreaking,” said sophomore and organizer Caroline Potts, 15, of their presentation. “I don’t cry a lot and I was choking back tears.”

Principal Angie Collins said the student’s demonstration fell in line with the Critical Concern of Nonviolence promoted by the Sisters of Mercy, which students read at the end of the presentation. It promotes nuclear disarmament, arms reduction and prevention of domestic abuse, human trafficking and violence, reading in part, “leads us to advocate for commonsense gun violence prevention legislation.”

“They have been very in-tune to what’s happening,” through social media and being aware the issue directly affects their age group, Collins said. “They identify very closely with those students.”

While Collins did not approve a walk-out in order to preserve the safety of the students and academic time, she said the students “took the bull by the horns” and came up with a plan that was approved.

“When you want to stand for a cause, you have to give something up,” she said, explaining that students sacrificed part of their lunch hour. She said it was important to dialogue with students about why they were taking a stand to make it an educational experience rather than a “knee-jerk reaction.”

“One of the things we want our girls to be is women of action,” Collins said.

The student-led effort, organized by the A.P. U.S. History students, included a school wide moment of silence at 10 a.m., and during the remaining 17 minutes of silence while completing schoolwork, many students chose to stand in solidarity with the victims. In addition, an all-school lunch ended with a roughly 17-minute presentation that included slideshow photos of the Parkland victims. Students each read a victim’s name, detailing a little about their life, including college plans, participation in extracurricular activities, what they did in their communities or dreams for the future.

“It’s affecting high school students,” said organizer and sophomore Isabella Boyd, 16. “We are the next generation. The next politicians are going to be us and we need a head start.”

Both Boyd and Potts said they were inspired by Parkland survivor and vocal gun reform advocate Emma Gonzalez.

“They were students like us,” Boyd said. “ … I hope it just gets them thinking about what is right about gun” reform, she said, with Potts adding “We can make an impact as high school students.”

At nearby Catholic High School for Boys, student body officers read the names and information about each Parkland victim and explained the reasoning for 17 minutes of silence at lunch or study hall, which included “As you meditate in this moment of silence, please think about the following victims and all their potential that a gunman killed one month ago today.”

Students also used the moment to not only pray and remember, but as a call to action, saying in part: “We can be the ones that put an end to this senseless killing. This can be our generation’s moonshot. The problem is both a common-sense gun ownership issue and a mental health issue, and we don’t know the solution. I’m saying that we can be the ones to stop this bloodshed, we can be the generation that administers the tourniquet to our bleeding nation.”