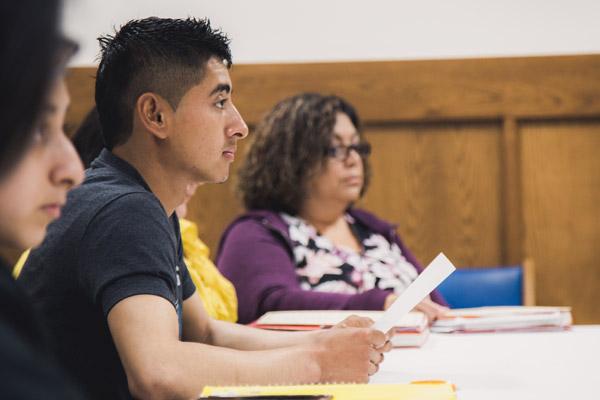 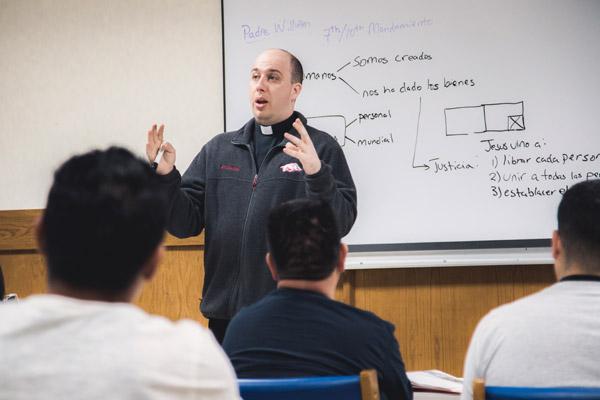 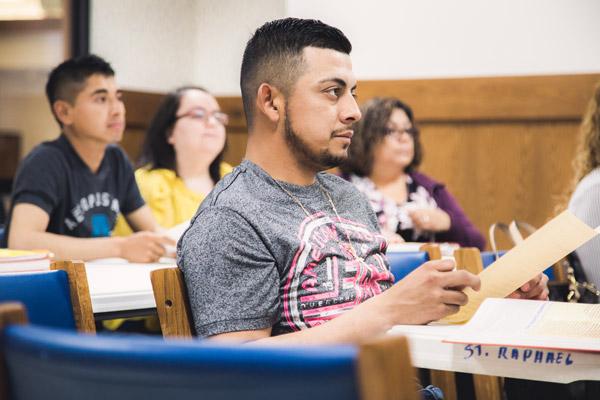 Travis McAfee
Leopoldo Pérez listens during an RCIA class in Spanish at St. Raphael Church in Springdale March 18. Many Hispanic adults who have grown up in the faith are now completing their sacraments.

Travis McAfee
Leopoldo Pérez listens during an RCIA class in Spanish at St. Raphael Church in Springdale March 18. Many Hispanic adults who have grown up in the faith are now completing their sacraments.

For Danely Mendez, the question “what religion are you?” is a no-brainer — she was born and raised Catholic.

But the 23-year-old parishioner of St. Raphael Church in Springdale will officially enter the Church this Easter, making her confirmation after months of attending RCIA classes.

Mendez, born in Mexico and came to the United States at 2 years old, is one of many who have grown up in the Catholic faith, but are officially joining the Church by completing her sacraments.

“I guess it’s just wanting to have the final step and knowing I am fully integrated into a great community and finally actually confirm my faith as a Catholic,” she said.

Another part of the study revealed 37 percent of Hispanics attend Mass weekly or more, while just 21 percent receive Communion every time they go.

“We have a lot of people who have spent a great deal of their lives traveling, living as immigrants,” said Father Mauricio Carrasco, pastor of St. Andrew Church in Danville, St. Augustine in Dardanelle and associate pastor for Hispanic Ministry at St. John in Russellville. “… It’s hard to get consistent catechesis if you’re moving around.”

Hundreds of Latinos will officially join the Church this Easter, moving from cultural Catholicism to a deeper understanding of their faith.

LIFE GETS IN THE WAY

Sister Norma Edith Muñoz, MCP, director of Hispanic ministry for the Diocese of Little Rock, said in Latino countries, Catholicism is a way of life, but sacramental preparation or catechesis is often a luxury or unattainable.

“A lot of people that came from Mexico, sometimes they come from rural areas where the priest goes once a month or once every three months. What they usually do is they do baptize the children, but unless there’s a good catechist” they may not receive the rest of their sacraments.

Father Carrasco, born and raised for 11 years in Chihuahua, Mexico, before coming to the United States, said many second and third generations have fallen away from the sacraments. Grandparents often have a deep devotion to the faith, but adults who may not have been able to receive formal education, let alone catechesis and the sacraments, have a hard time understanding the faith or passing it along to their children.

“Their kids are now receiving a formal education in school and they have a hard time articulating their faith life or spiritual desires in Spanish, that kind of clashes with their parents,” he said. “This is what we did, what we do culturally, but they don’t have a reason to explain their faith. So the second and third generation is not being provided a reason for their faith.”

Lynn Ekstrom, faith formation director at St. Theresa Church in Little Rock, has about 50 Spanish-speaking members in her multi-generational RCIA class this year, with 19 requiring baptism.

“Life tasks that have gotten in the way that are important before they can focus on going back to church,” said Ekstrom, who has prepared Catholics for the sacraments since 1987, the past three years at St. Theresa. “Also, it’s a matter of finding a faith community where they feel safe,” as many are undocumented.

Ekstrom said part of what has helped her understand through years of teaching Hispanics coming into the Church was studying for three weeks at the Southeast Pastoral Institute in Miami about the religiosity of Hispanics.

The concept of obedience is a foundation for devotions. Most Latino countries have a great
devotion to the Blessed Mother — from Our Lady of Guadalupe in Mexico to Our Lady of the Immaculate Conception in Nicaragua.

“They are going to be there on the huge feast days. In a lot of towns there were great festivals like Our Lady of Guadalupe. We jokingly say Mexicans, we’re Guadalupanos — a word which means you have a great devotion to Our Lady of Guadalupe, but you are a poor Catholic,” Father Carrasco said. “On the 12th of December, the church is packed. When it comes to Christmas day, only 75 percent of the church is there. That’s how they grew up. Pilgrimages are deeply engrained in them and the Blessed Mother is their protector.”

Danely Mendez said during her RCIA classes, her father, Humberto Mendez Colin, died Nov. 28 from cancer. It’s in the moments of weakness from grief that RCIA has been a guiding light.

“My family and I have gone through a really rough spot; we lost a family member so precious to us, our dad,” she said. “I’ve gained a deeper understanding of God and the Bible. It’s been able to push me and motivate me that everything is going to be OK. It’s gotten me through that moment so I don’t break and fall into pieces. It’s helped to go forward.”

Edgar Aranda, 18, born in the United States, said family struggles delayed his confirmation. He was baptized in the Catholic Church in his family’s native Mexico, and his relatives had to mail proof as there was no baptismal certificate or photos in Arkansas, he said.

He attended St. Theresa Church in Little Rock as a child and made his first Communion.

“My brother is autistic so I’d usually have to stay home and babysit,” he said. “My family used to go to church every Sunday but then around five years ago we basically started fading away from it.”

Aranda has always considered himself Catholic and decided to attend RCIA classes at St. John Church in Russellville while attending Arkansas Tech University.

“I realized I have been not as close as I wished I was to the Church. Now that I went to college I have more free time, I can make more of the decisions I want. One of them was I wanted to get closer to God,” he said.

He was confirmed March 24, ahead of Easter weekend, with Bishop Anthony B. Taylor as celebrant.

“It shows how much into the Church you actually are, how strong your faith is,” Aranda said of the sacraments.

Many parishes work to make their Spanish RCIA programs flexible in scheduling and content.

“Some of them don’t have a lot of formal education … You have to think of very concrete ways to explain theology,” Father Carrasco said. “There’s a lot of specific tailoring. You have to accommodate a lot their work schedule, their level of education and the level of which they’ve integrated the Catholic faith in their life.”

While many are still active in the Church and baptize their children, Sister Norma said the key is showing that the sacraments are more than a checklist.

“They even say, ‘OK we’re done.’ They say they got all their sacraments, we say, ‘No, they need to still come to be formed in their faith; know their faith more profoundly,’” she said.

Maria Balderas, 21, came to the United States from Mexico when she was 5 years old. She will not receive her sacraments this Easter but has been taking RCIA classes at St. Barbara Church in De Queen. She said “all my siblings have their sacraments, and I was never really forced to do them. I did go to church,” but participating in catechesis was not something she felt called to do until now.

“I really actually enjoyed it a lot, I’ve learned more and understand more during Mass,” she said of RCIA classes. “I just feel like I’m closer to the religion, to God and I just feel like it’s actually helping me a lot.”

St. Barbara RCIA leader Norma Sanchez said putting children through catechesis is not a priority because for the adults, “they came to the United States to work. Their focus is working.”

There are 26 people in her RCIA class, the majority teenagers or young adults. Some want to be married in the Church, but others want to participate in more activities like being a lector at Mass, and youth groups encourage young people to get more involved.

“Most of the students only need confirmation and they can’t be a sponsor if they don’t have all the sacraments,” said Monica Lopez, RCIA leader at St. Raphael. “… They start listening in the classes. They can be part of the group.”

In a time when immigration debates rage on and feelings of unwelcome weigh heavy on Latinos, even in some parishes, movements or groups like Cursillo, Charismatic Renewal, Búsqueda and young adult groups are the greatest source of drawing Latinos to a deeper faith.

“The movements in the Church do a really good job at making them feel at home. So when that happens, people feel at home and they have a desire to get married in the Church” and begin to look into RCIA, Father Carrasco said.

V Encuentro, or “Fifth Encounter,” is an evangelization program bringing to action the spirit of the disciples at Emmaus, Luke 24:13-35. It has had 30 parish teams in the diocese sharing their faith with Catholics who have fallen away from the Church. The four-year program moves up in levels, from parishes, dioceses, regional to national.

As the program continues to the regional level, Sister Norma said she hopes to see more Latinos coming back to the Church and taking steps to receive the sacraments.

“We have had through V Encuentro, making home visits and everything, people say ‘Oh, you’re from the Catholic Church? The Catholic Church has never come to visit me.’ So we do have some people coming back with the process,” she said. “I just hope we keep up this missionary spirit in the Church.”