For 15 years, he prayed the rosary as a meditation for calm, comfort 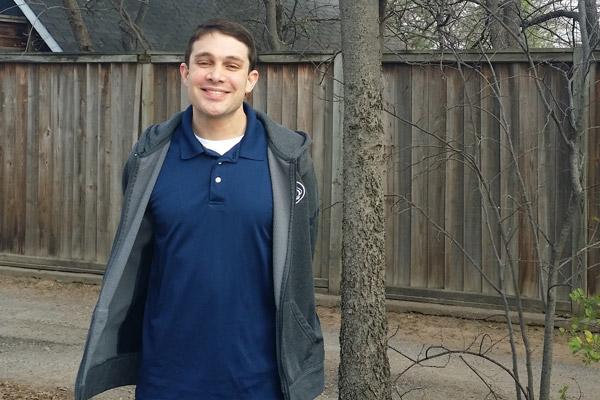 FORT SMITH — When Dan Rose, 39, is baptized at Immaculate Conception Church during the Easter Vigil, atheism will have lost one of its most ardent supporters.

“My parents were both hippies,” Rose said, “and I was never exposed to religion growing up in the Philadelphia suburbs. I read a few Bible stories as a child but never went to church. I became an atheist almost 30 years ago, and I was full on and very forceful about it. The biggest regret in my religious life is that I lived so long in such darkness.”

As Rose reached adolescence, he suffered from severe anxiety and depression and felt lonely and isolated in his struggles.

“I was medicated for a lot of years and was in and out of psychiatric hospitals,” he said. “I lived in darkness, and the further I moved away from God or religion the worse I felt.”

When he was in his early 20s, Rose met his wife, Rosie, online. As their friendship grew through conversations and chats, he moved to Fort Smith and started attending Westark College.

“I was having horrible insomnia and was very anxious and depressed. I started praying the rosary as a calming mechanism. I learned the words of the Our Father, Hail Mary and Glory Be and reciting the words became a kind of meditation for me. The rosary did its work in secret and in silence; Our Lady was bringing me towards her Son’s Church without my knowing it.”

Although Rose found comfort reciting the words of the rosary, he did not make the decision to become a Catholic for another 15 years. He and Rosie had two children, Willow, now 10, and River, now 8, but he still resisted what he now calls “Our Lady’s Lasso.”

He attended the Easter Vigil and his daughter’s first Communion a few years later, but still described himself as a “non-believer locked in my mindset.”

As he watched his family receiving the sacraments Rose began turning to what he called the Old Atheist’s Prayer: “God, I don’t believe, but if there is something, help me now.”

Although Rose attributes his conversion to Mary’s intercession and the power of the rosary, his atheist’s prayer was the invitation God was waiting for.

“It just takes one little opening of any type — the Easter Vigil, my daughter’s Communion — and after that Jesus burst in,” he said. “It’s so hard to put into words. I learned more about the rosary and other prayers.”

He began watching EWTN and began calling himself a Christian. He realized that Jesus had died for everyone, and for him personally, but his mother’s death last year was pivotal in his decision to join RCIA and become a Catholic.

“When my mother was dying, we talked a lot about the Bible and she began to grow closer to God,” he said. “After her death I was lost and upset. I ran to Our Lady and she took me in her mantle and kept me safe while I was grieving. She brought me to her Son’s Church and helped me to accept all the teachings I didn’t accept at first. Without Our Lady’s intercession I wouldn’t be alive.”

Rose’s family set an example of faith for him in his spiritual journey, and he is ready to be a good example for his children. Willow is an altar server, and River will make his first Communion in April. Rose, who says all four mysteries of the rosary each day, frequently prays the rosary with his wife and children.

He says his lack of exposure to religion as a child had one benefit.

“When I was in RCIA I never had any preconceptions about the Catholic faith, as many people brought up in other faith traditions do. The more I learned the more understanding I gained. I am so excited to be receiving all three sacraments at the Easter Vigil.”