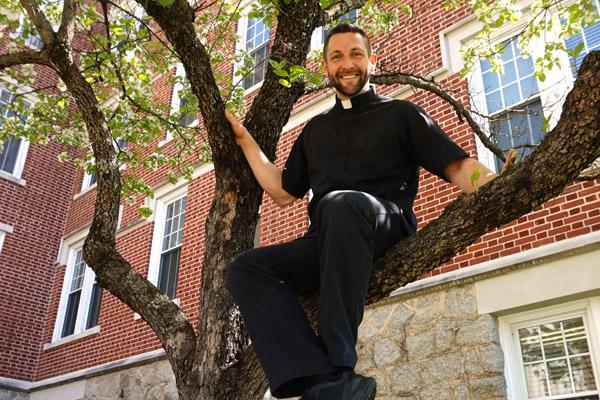 Aprille Hanson
Father Stephen Gadberry demonstrated strength at a photographer’s request by easily swinging up into a tree at St. John Center in Little Rock. He tried out for the next season of the NBC reality show “American Ninja Warrior,” which will premiere in late May.

Aprille Hanson
Father Stephen Gadberry demonstrated strength at a photographer’s request by easily swinging up into a tree at St. John Center in Little Rock. He tried out for the next season of the NBC reality show “American Ninja Warrior,” which will premiere in late May.

As priests around the world spiritually and physically prepared for the demands of Holy Week, Father Stephen Gadberry started with a unique goal: “Don’t fall.”

“Hold on tight, breathe, concentrate, focus. Really in the heat of the moment it’s just survive. Just keep moving forward one more step, one more step, that’s what was going through my mind, just one more step,” he said.

On Palm Sunday, March 25, Father Gadberry was running, jumping and launching through the air on an obstacle course, trying out for the NBC reality show “American Ninja Warrior.” The show allows everyday “warriors” to show off their skills in a series of challenging obstacle courses. Competitors advance from city qualifying and finals to regional finals and finally national finals in Las Vegas. The grand prize winner receives $1 million.

“It was crazy, but it fed in perfectly into Holy Week,” he said. “On the obstacle course, you have to identify the obstacle, you’ve got to plan to attack it and to go on knowing that it’s going to be kind of hard, but knowing that there’s an end in sight. It’s the same with the Triduum — recognizing the struggle of sin and death but knowing that that’s not the end, facing it and go walking with the Lord to Easter. So it was a good spiritual shot of caffeine.”

After applying in December, Father Gadberry, pastor of St. Mary Church in Batesville and St. Cecilia Church in Newport, received the call in mid-February to compete in Dallas for a spot on the show.

Though he could not reveal the outcome of his tryout, his passion for CrossFit, as both an exercise regimen and now as a certified trainer, prepared him well.

“All the individual obstacles are doable … but it’s just doing those when you have that stress and that pressure on you and the lights on you and the people yelling,” he said.

Surrounded by friends, family and fellow religious, including sisters and brother priests, Father Gadberry and other ninja hopefuls competed from 10 p.m. until 7:45 a.m. the next morning.

“He’s amazing. He was faster, he was focused on his obstacles,” Sister Ana said. “… He invited us because he thinks we’re a family, sisters and priests, and it’s an opportunity to evangelize. That the Church is near in every space.”

The sisters prayed with other families and competitors in between intently watching the competition.

“He made sure it’s good for evangelization because it’s not common to have a priest or religious participate in these events,” Sister Silvia said. “It’s an opportunity to listen and pray with them (other competitors) and support our priests.”

Father Gadberry, 32, said the camaraderie with his fellow competitors was a highlight, along with meeting Sean Bryan, known as the “Papal Ninja” from season nine of ANW. The two first met on social media and were able to meet a few times while in Dallas for tips and advice.

“Although I’m with people all the time, I don’t get too nervous celebrating Mass or preaching things like this, but there it’s so energized and his greatest tip was just to have fun. And that helped me to stay calm through it,” he said.

Confirmation students at St. Mary Church have eagerly offered up various nicknames for his time on the show and though the nicknames tend to pop up organically from the audience, Father Gadberry said his favorite was “Father Flex.” It fits nicely with his often used hashtag “jesusismyhomie” on Instagram.

“Father Flex is not just muscles … With all this stuff I want to invite people to take it to the next level, go to the spiritual level…,” he said. “We can flex our spiritual muscle too whenever you really got to lift some heavy spiritual weights and love somebody that you don’t want to love or forgive somebody you don’t want to forgive. Or really walk a walk with somebody that’s very challenging. Very much the same way spiritually, you’ve got to build that muscle up.”

On April 4, the show’s production crew came to Batesville to film a typical day for Father Gadberry, including exercise, playing with his dog Murph and a packed parish to celebrate Mass, which he called a “beautiful opportunity.”

The faithful in his parishes think its “fun” that he tried out for the show, but it’s more about “sharing the joy of being Catholic,” he said.

“What they’re excited about is that the Church that they’re a part of is doing things that people usually wouldn’t imagine. So their church is going to the peripheries is what Pope Francis says,” he said. “… They’re telling all these other people of different faiths and denominations that, ‘My church is not one that is stuck in a box. My church is one that can go and do crazy stuff, come check it out.’”

Father Gadberry has no intention of becoming a reality star. It’s all about using a larger platform — last year the show averaged 6 million viewers per episode — to “proclaim the Gospel using the talents that God has given me.”

Part of spreading the Gospel is breaking the priest stereotype.

“So many of my brother priests have amazing talents,” from music to athleticism, “so anyone reading this, their pastor has an amazing talent or two or three. Ask them about it, because it reveals the human side of us,” he said. “We are really the image of Christ in the Church and it’s easy to think of God as this being who is way out there, but Jesus came to be like one of us so hopefully the priest can be somebody at the altar who people look up to, but at the same time be one of the people, and that’s what it means to be Christ as a priest.”

He admits he has at times received “pushback” for his fitness dedication “saying well why do you waste your time doing that when it’s the spiritual life that’s so important?” But for him, physical and spiritual wellbeing parallel and Bishop Anthony B. Taylor encourages all priests to “always be learning and he really supports all of us studying things that we’re passionate about,” Father Gadberry said.

“The spiritual life is important, but the soul needs a body. And that body must be a stable place where the soul can reside. We have to take care of our body; it’s the temple of the Holy Spirit as Paul says. This is just a way of continuing my education/formation so then I can be better equipped to catechize people through that hobby of mine,” he said.

The next season of “American Ninja Warrior” premieres on NBC May 30.