Monk has led many winning tennis teams for four decades 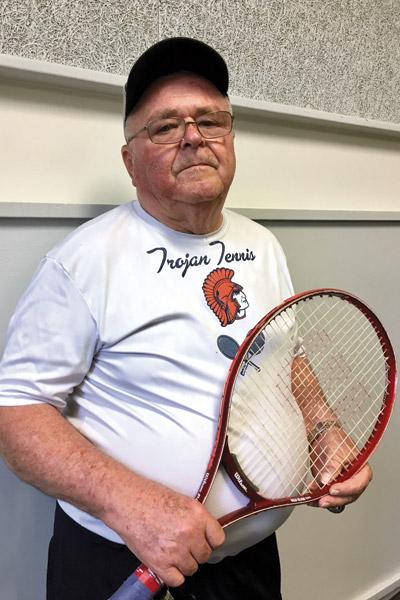 Brother Adrian Strobel, OSB, poses with the tool of his trade. He is retiring from coaching Subiaco Academy’s tennis team, a post he has held with distinction for 40 years.

Brother Adrian Strobel, OSB, poses with the tool of his trade. He is retiring from coaching Subiaco Academy’s tennis team, a post he has held with distinction for 40 years.

The first season that the Trojan tennis team of Subiaco Academy was piloted by Brother Adrian Strobel, OSB, “All in the Family” was must-see TV, John Denver and Jim Croce ruled the radio and Richard Nixon took his famous final helicopter ride from the White House lawn.

But with the close of the current school year — and with it, Brother Adrian’s 40th season as lord of the court — the racquet has been passed.

“I’ve had (retirement) in mind for a while,” said Brother Adrian in his signature understated manner. “It’s kind of hard to keep up with the kids anymore, so I decided it was time to step down.”

His arrival in the post that would come to define his legacy happened inauspiciously enough. Gently put, he was ordered to take the gig in 1973.

“Father Benno Schluterman, OSB, was our principal at the time,” Brother Adrian remembered. “He called me in and said, ‘We need a tennis coach and you’re going to be it.’”

It’s dangerous to say “never” in sports; many records that were once-thought unassailable have been shown to be merely placekeepers for someone with enough talent, determination and time to take them down. That said, it’s hard to imagine anyone getting close to Brother Adrian’s stats in the foreseeable future.

Coaching in 40 of the 45 seasons since his chat with Father Schluterman, Brother Adrian brought home the conference team title 32 times. His athletes won the conference doubles title 32 times, the conference singles title 21 times and he coached 10 doubles teams and five singles players to state championships over that span. His four Arkansas Coach of the Year awards and 2005 national Coach of the Year honors merely underscored what his athletes — and his competition, for that matter — already knew.

“The thing that he stressed mostly while playing was mental toughness and just being able to keep your head in the game and not get upset with yourself or anything. Just play your hardest, don’t get distracted,” said senior Andrew Eveld of Charleston, a two-time state winner in doubles. “That has really helped my outlook on life, I guess, just keeping your head on straight and not getting down.”

“He made me realize that you always have the ability to do stuff yourself. You just got to believe in yourself and that’s how you get the best out of life.”

The game didn’t get much notice when Brother Adrian took over as coach and he dedicated himself to growing the sport of tennis, particularly in smaller schools. He was heavily involved in administrative aspects, spearheading the conference tournament for 20 years and serving on the organizing committee for the state tourney for the past 12 years.

But unquestionably, his most enduring legacy are the hundreds of players he influenced and mentored throughout his remarkable run as Subiaco coach. His lessons of dedication, hard work and character served each of them well in competition and even better in life.

“He taught me if you’re not good at something, perfect it in yourself and be willing to put in all the time and effort that you can and you’ll see dividends. I’m just incredibly thankful for everything on and off the court that he’s given to me during my high school career and afterwards.”

Brother Adrian may be officially stepping aside, but he won’t stray too far from the gleaming new courts they put in a few years ago. The Benedictine enclave in Subiaco has influenced every phase of his life from St. Benedict Elementary to graduating Subiaco Academy in 1962, entering the novitiate in 1964 and taking his first vows in 1965. Brother Adrian casts a similarly long shadow on the program and it’s a fair bet his successor will tap him for assistance and advice here and there.

And while he can’t recall precisely how many athletes he’s coached over four decades, Brother Adrian said they all represent what was most rewarding to him throughout the experience.

“One of the toughest things is getting kids to have confidence in themselves, to believe that they have talent and can do well,” he said. “I’ve seen so many kids who became so much better once they got that mindset.”

“Just to see them do that and really try to do what you were coaching and telling them and everything, it was a joy to see them fulfill that.”