Patrick Friend happy to stay in the ‘family business’ 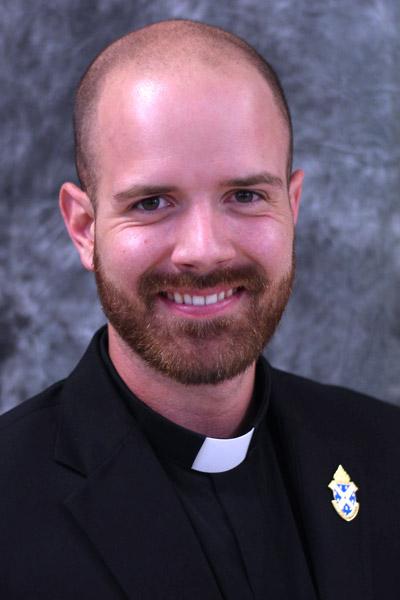 Should he be the third generation of dentists in the Friend family or follow his uncle Msgr. Scott Friend and become a priest? Instead, Patrick Friend decided to become a teacher.

“I had a sense that God might be calling me to be a priest,” he said, “but when I was in high school I was caught up in everything everyone else was. I was in the mode of following my own will. I was too scared.”

After graduating from Catholic High School in 2007, he went to Westminster College in Fulton, Mo., and double majored in biology and English.

“I wanted to be an English major and a poet,” he said. “But my dad wanted me to take the curriculum for dentist school too.”

“Catholic High isn’t Catholic because it has a crucifix on the wall or has a theology department.”

Like many of the alumni, he was drawn to become a teacher at his alma mater. During the 2011-2012 school year, he taught freshmen English and chemistry, the same year his brother Joseph was discerning his calling to the priesthood as a CHS senior.

With four years of college and a year of teaching under his belt, Patrick Friend was also able to discern that he had a true calling to become a priest. After ordination June 2, he will return to his alma mater once again, this time as a chaplain and teacher. He anticipates teaching religion and a philosophy elective as well as English or biology courses.

As chaplain he will work alongside rector Msgr. Frederick Lawrence to learn the spiritual needs of the students and faculty.

“It will be somebody specifically assigned to that school to be a prayer warrior for that school,” he said. “That school is my primary obligation. I want to be there for the football games and basketball games, for swim meets and chess tournaments, whatever it is.”

One thing Friend will miss in the seminary though is the closeness he experienced with his brother, who is scheduled to be ordained a priest in 2020.

“I can’t describe how grateful I am that the Lord called both of us,” he said. “There is nothing like at the end of a stressful day or a joyful day to be able to sit down with your brother, who knows you better than anybody… Joe is able to be completely honest with me. It is comforting to know that there is somebody who gets me. … In a lot of ways, my brother is my role model because he had the courage to do this right out of high school that I did not have.”

While both men grieve the death of their mom Betty in 2013, Friend said he can see the gifts that have come after the loss.

“After my mom died, I can see how it has been such a gift to my ministry. My mom is right there with me... It was hard losing her. I miss her every day, but I would not want to take her away from where she is now, the beauty of heaven. Having your own personal saint ministering beside you, I feel it.”