Annual trip focuses on faith and history of U.S. capital in D.C. 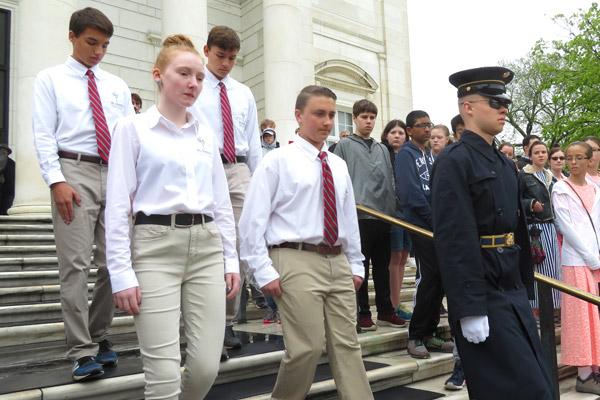 Eighth-grade students from St. Joseph School in Fayetteville (from top left) Joseph Dumond, Luke Welcher, Rose Chaffee and Murphy Beck process to place the memorial wreath on the Tomb of the Unknown Soldier at Arlington Cemetery in Virginia April 25.

Eighth-grade students from St. Joseph School in Fayetteville (from top left) Joseph Dumond, Luke Welcher, Rose Chaffee and Murphy Beck process to place the memorial wreath on the Tomb of the Unknown Soldier at Arlington Cemetery in Virginia April 25.

ROGERS — For eighth-graders at St. Joseph School in Fayetteville, an annual trip to Washington, D.C., has become an unforgettable rite of passage that few students want to miss.

The last week of April, the class of 20 students made the pilgrimage to the nation’s capital to spend four days exploring and learning about the country’s history and most important monuments.

One highlight of the trip, say students and teacher Christi Welcher, was laying the wreath on the Tomb of the Unknown Soldier at Arlington National Cemetery.

Assistant Principal Michelle Hightower said, “This was our second time to be able to lay the wreath on the Tomb of the Unknown Soldier, so the emphasis on the trip really reminds them of how privileged we are in our country today. I think everything the students see makes them feel very thoughtful and more reverence for those that have made sacrifices for them.”

Student Murphy Beck said this was one of his favorite memories of the trip.

“It was a huge honor to lay the wreath at the Tomb of the Unknown Soldier and made me realize the sacrifice that others have made for me to be free,” Beck said.

Along with Beck, students Rose Chaffee, Luke Welcher and Joseph Dumond also represented their class in the wreath ceremony.

The four students — the maximum number of participants in a group allowed to carry the wreath — were chosen through an essay contest held within class. Each year, St. Joseph applies one year in advance for the honor of being participants in one of the public wreath ceremonies at the cemetery during the student’s visit. This is the second time in the past 10 years the school has been selected to be a part of the ceremony. In addition to providing the participants, the student group must also provide the wreath for the ceremony.

“When the students saw the expanse of graves and saw how many soldiers had died for their freedom, it left them with a sense of awe and pride to be an American,” said Dr. William Beck, who was one of five parent chaperones to travel with the students on the trip. “They were inspired by it; the students saw that freedom has a price.”

This was Welcher’s second time to accompany students on this end-of-year trip and she believes it serves an important purpose.

“First, it is a God-centered trip based on the Christian reasons our country was founded and shows how important religion was and is in our government,” Welcher said. “The trip also gives the students a base knowledge of many different wars, historical moments and how the government works that they will recall as they study these subjects in high school.”

Other important stops on the trip were attending Mass at the Basilica of the National Shrine of the Immaculate Conception, seeing all of the memorials and visiting the capital. U.S. Rep. Steve Womack of Rogers took them on the floor of the House and spent an hour answering their questions.

Welcher, the junior high math teacher, also emphasized that the trip is a “senior” trip for graduating eighth-graders and this is a final chance to bond, reminisce and enjoy one another’s company.

A decade ago, school board members and faculty organized and implemented this trip as an incentive to retain what was then the graduating class, the seventh-grade.

Assistant Principal Michelle Hightower was a parent on the school board at that time and remembers the initiative back in 2008.

“One parent on the school board initially got this started and gave seed money so that every student was guaranteed to go,” she said. “Still today, scholarships are available for students to apply for in order to meet the financial needs of making the trip.”

Hightower said the students fundraise throughout their seventh and eighth-grade years for the trip. The all-inclusive cost for each student to fly to Washington and tour the capital through a touring company is $1,900.

According to Hightower, the students raised approximately $10,000 this year to make the excursion.

“We had 100 percent participation,” she said. “All of the students in the eighth-grade went. It is something every year that the students anticipate and look forward to.”