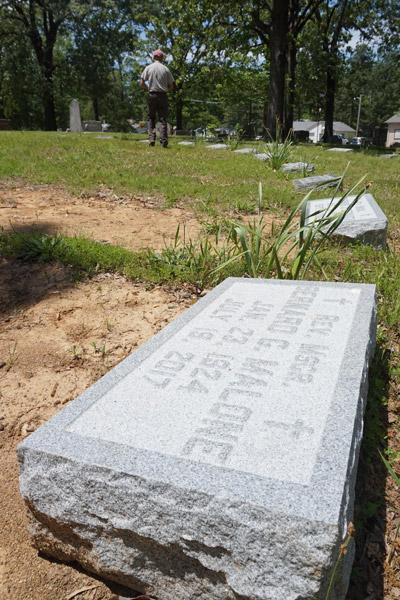 Aprille Hanson
Msgr. Bernard Malone was buried in July 2017 in the Priests’ Circle at Calvary Cemetery in Little Rock. Supervisor assistant Robert Tatelee, walking in the background, will assist with updates to the circle.

Aprille Hanson
Msgr. Bernard Malone was buried in July 2017 in the Priests’ Circle at Calvary Cemetery in Little Rock. Supervisor assistant Robert Tatelee, walking in the background, will assist with updates to the circle.

Bob Honzik was one of many who went out to Calvary Cemetery in Little Rock July 24 to say goodbye to Msgr. Bernard Malone, who had died five days before at age 93.

The fourth person to put a shovel of dirt on his casket, Honzik, a member of Sacred Heart of Jesus Church in Hot Springs Village where Msgr. Malone last pastored, was not only struck by the loss of this beloved priest, but the condition that time has left on the cemetery’s Priests’ Circle.

“Msgr. Bernard spent a lot of time living in our home after he retired. He was just family,” Bob Honzik said of him and his wife Mary Anne.

He was a pallbearer at the funeral and that was the first time he visited Calvary Cemetery.

“We’d like to have a little bit more of a focus on our priests after they have served their purpose here on earth.” Bob Honzik, a member of the Knights of Columbus

“There was nothing to differentiate (Priests’ Circle) from anything else in the surrounding cemetery.  … We’d like to have a little bit more of a focus on our priests after they have served their purpose here on earth.”

As a way to continue to honor the memory of the priests that dedicated their life to the Diocese of Little Rock, the Hot Springs Village Knights of Columbus Council 10208 has agreed to donate $6,375, with another $1,000 from the State Council, toward refurbishing Priests’ Circle. There were 11 donors, all knights, Honzik said.

The circle was first established in 1933. There are currently 49 priests buried in a large circular formation. Mike Cagle, cemetery superintendent, said Knights of Columbus councils have contributed to the upkeep of Calvary Cemetery, including headstones, a donated flag pole and a chain link fence.

“The Knights of Columbus have been good to the cemetery over the years and helped us with things we wouldn’t be able to do,” Cagle said, adding, “It’s something that needed to be done anyway. It’s one of the focal points of the cemetery.”

Improvements will be paid for by the council members and the labor will be completed by Calvary Cemetery. They include:

• Moving the grave markers to form a perfect circle

• Planting red encore azaleas on outside of the circle, encompassing the circle

Grand Knight Rich Rivera was able to use his military and employee discounts at Home Depot to buy materials other than sod. The council will also create a video showing the Priests’ Circle before, during improvements and after completion.

As of press time, the benches, fertilizer and mulch were delivered. The first phase of surveying graves has been completed, but it is still not finished, Cagle said.

“When we get done, it will be a Priests’ Circle and not a priests’ egg shape,” Cagle said.

Honzik said he wants the Priests’ Circle to have “eye appeal,” with the benches “there for people who wish to come to visit or pray over the circle for the priests” and the azaleas, which bloom almost year round.

“It just seemed to me they deserved something more than what the Priests’ Circle represented at that time. They have given their whole life to the priesthood. I’ve seen some of these guys and how they touched people. Msgr. Bernard, I’ve seen him bring people back into the Church and how he was so gracious with people,” Honzik said.

“What these religious people do, they just should have a little more respect.”

Pine Bluff pregnancy center on the move with mobile unit

A Catholic you want to know: Bob Honzik