At Catholic High, the sign of lacrosse is found everywhere

Arkansas is one of three states without sanctioned teams 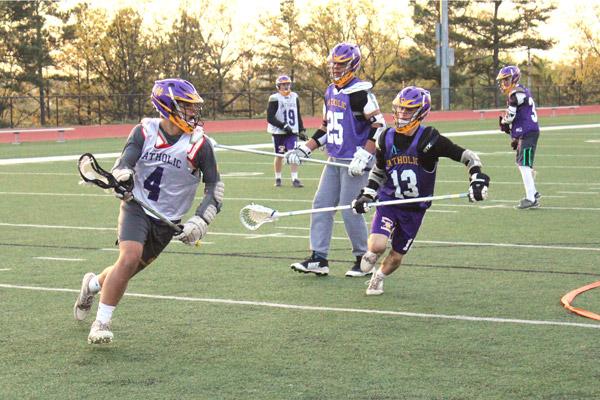 Dwain Hebda
Brandon Barnes (No. 4) finds the corner and sprints for the goal with the defense in hot pursuit. Barnes, a Catholic High senior, will play lacrosse for Hendrix College in Conway next year.

Dwain Hebda
Brandon Barnes (No. 4) finds the corner and sprints for the goal with the defense in hot pursuit. Barnes, a Catholic High senior, will play lacrosse for Hendrix College in Conway next year.

With broad shoulders, solid torso and powerful legs, Brandon Barnes looks every inch a football player and for much of his young athletic life, that’s what he’s been. In fact, the Catholic High senior’s hard work in the weight room and on the field of competition has earned him a spot on the Hendrix College team this fall.

But it won’t be in the sport he expected when he reported to Little Rock’s Catholic High School four years ago. Though it’s easy to picture him at tightend or linebacker, Barnes will be joining the Hendrix men’s lacrosse team.

“(Lacrosse) combines a little bit of everything,” said Barnes, a member of Immaculate Heart of Mary Church in North Little Rock (Marche). “You can hit people like football, the playing style is a lot like basketball, there’s a little bit of soccer in there with the positions and everything. It’s just really fast-paced and far more fun than any other sport I’ve played.”

Barnes’ story isn’t yet a common one in Arkansas, but it may soon be. Arkansas is one of only three states that doesn’t offer lacrosse as a sanctioned high school sport but thanks to some pioneering clubs in the state, including Catholic High, which just wrapped up its inaugural season, the game may be here sooner than you think.

“There’s something about it being a contact sport but still having the elegance of passing the ball around like soccer. But you’re hitting each other.” Matthew Findlay, a junior at Catholic High School

“Everybody on the East Coast plays lacrosse, everybody north of us plays lacrosse,” said Jennifer Wilcox, CHS math teacher and the club’s sponsor. “Actually, everybody all around us plays. Tennessee has a huge lacrosse league now, Oklahoma, Texas, Missouri, everyone except Arkansas.”

Lacrosse is a uniquely American sport, first documented among the Native American tribes of Pennsylvania and New York. The game uses a stick with an open scoop on one end, laced with webbing, with which players pass, catch and shoot a dense rubber ball about the size of a tennis ball.

A team of 10 players — some on defense, some on offense and some who can roam at will — move the ball down the field and tries to score by slinging the ball into a goal on either end. Think hockey without ice or soccer with sticks and you start to get the idea.

“There’s something about it being a contact sport but still having the elegance of passing the ball around like soccer. But you’re hitting each other,” said junior Matthew Findlay, a member of Our Lady of the Holy Souls Church in Little Rock. “I tried it one time, and I immediately fell in love with it.”

“It’s so much different than what you’re used to. You think it’s going be some weak dudes running around passing the ball then you get out there and you see some dude slam another one on the ground. It’s pretty shocking.”

The men’s game allows contact both with the body and with the stick (the girls game only allows stick contact), so players wear protective gear. But it’s a far cry from the football variety of impact, said Justin Temple, the club’s coach and 2016 Catholic High grad.

“It’s a very fast-paced sport,” he said. “The hitting isn’t as brutal as a football hit. There’s not as much helmet-to-helmet contact and the style of checking is a lot different. It’s not a run-in-full-speed-and-destroy-your-opponent kind of a thing.”

Despite mixed success on the field — the team won a tourney to start the season but struggled thereafter — club numbers and enthusiasm are high. The 24 players bring a range of experience to the game; half had never touched a stick before this year while others have been playing in a local club league for a while. All of the players are glad to compete under their school’s banner.

Catholic’s club is one of just four in the state, meaning the game has a lot of growing to do before it’s a varsity spring sport. But Wilcox is confident it will get there.

“I think it will gain in popularity for a few reasons. One, it’s fast-paced and fun; there is enough contact and hitting that boys really enjoy it,” she said. “Another thing is, a lot of kids are grabbing college scholarships for it because it is the fastest-growing sport in America right now on the college level as well as the high school level.”

“If you’ve ever been to a lacrosse game, you love lacrosse. I have not met anyone who’s come to a game that didn’t think it was the most fun sport to watch. It’s fascinating.”

Correction: An earlier version of this article incorrectly stated Hendrix College offered an athletic scholarship. This article has been updated.