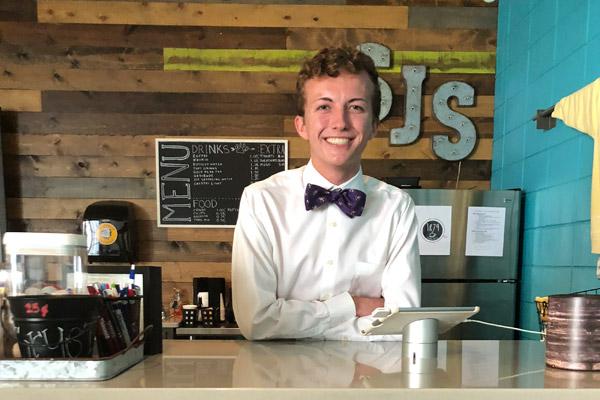 Aprille Hanson
Ian Martin O’Dwyer helped start the 1879 Coffee & Co. in the St. Joseph High School Cyber Café. The 17-year-old graduate wants to one day own a business or help others launch theirs.

Aprille Hanson
Ian Martin O’Dwyer helped start the 1879 Coffee & Co. in the St. Joseph High School Cyber Café. The 17-year-old graduate wants to one day own a business or help others launch theirs.

CONWAY — Ian Martin O’Dwyer is leaving behind tangible legacies at St. Joseph High School in Conway when he accepts his diploma.

He was instrumental in starting the Cyber Café and coffee shop as well as a weekly student news channel. He excelled all three years of its existence on the cross country team, played soccer two seasons, served as co-president of the Student Cabinet and lectored at school Masses.

“I think I need to leave my mark on places and especially a place that’s so near and dear to my heart,” Martin O’Dwyer said. “I want this school to be better, so I’m trying to do it in any way I can.”

The 17-year-old is the oldest of six children to parents Chris and Lenisa O’Dwyer. He’s attended St. Joseph School since kindergarten.

“It’s surprising what you can accomplish and the ideas you can have with maybe someone who’s completely different from you.” Ian Martin O’Dwyer, 2018 graduate of St. Joseph High School

“It’s helped me understand the Catholic faith in more of a conceptual sense … just in the way I view other people in the world, especially other people that aren’t Catholic or aren’t Christian even,” he said. “It’s super cool because I understand where I’m coming from and what I believe and my personal beliefs … but then I can also be open to other people and know that really it’s all about loving everyone.”

Working well with others coupled with natural creativity has benefited both him and the school. In fall 2015, St. Joseph opened its Cyber Café, a multipurpose tech-savvy indoor space that leads into the courtyard, an idea Martin O’Dwyer helped brainstorm into existence. In the 1870 Coffee & Co., students can earn service hours by selling coffee, other drinks and smart snacks.

“I was really interested in doing graphic design work so I helped them with that and it’s all history from there,” he said of the coffee shop. “… It was a perfect storm of opportunity and the two teachers that were sponsoring it (Kathleen Gueringer and Monica Lieblong) they are incredible women, very inspiring, super supportive of my ideas.”

“It’s surprising what you can accomplish and the ideas you can have with maybe someone who’s completely different from you. Like students that were involved in the multimedia class with me, I may have been in charge of making sure everything looked good, but then they were more technical and together we kind of collaborated,” he said.

In 2016, he worked as vice president of marketing for ThoughtfulBoxes, a gift box company that Lieblong ran for a year before teaching at the University of Central Arkansas. It gave Martin O’Dwyer “the whole small business experience with start to finish.”

In the fall, he’ll attend the UCA Honors College, studying innovation and entrepreneurship.

“The idea of working with other people is the most appealing when it comes to entrepreneurship and business and having something at the end of the day you can call your own,” he said, adding the dream is to move to a big city like Chicago or New York.

The community at St. Joseph and their openness to new ideas is what he’ll miss most, hoping that years later “it’ll be the same, but they’ll have improved and I trust they’ll continue doing that because just in the short time I’ve been here, so much has happened.”