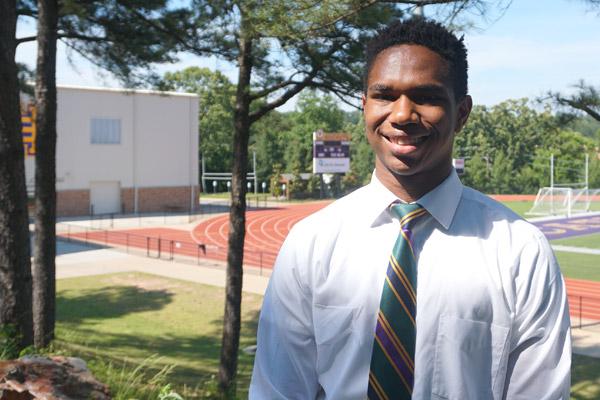 Malea Hargett
Bryan Onyekwelu, who will graduate May 25 from Catholic High School, played on the football and track teams and served as president of REACH.

Malea Hargett
Bryan Onyekwelu, who will graduate May 25 from Catholic High School, played on the football and track teams and served as president of REACH.

For the first few years of Bryan Onyekwelu’s life, he was living in Oakland, Calif., but he was surrounded by the Nigerian culture and language of his parents.

“I was just with my mom the entire time (after I was born). I didn’t even know how to speak English. I was speaking Igbo (pronounced EE-boo), which of one of 250 languages in Nigeria. That is one of the main languages. That was my first language for a while.”

The family moved to Arkansas about 10 years ago and has stayed connected to their culture by attending the Mass in Igbo at St. Augustine Church in North Little Rock.

“There is a large Nigerian community in Little Rock so it is a way for us to get together once a month besides graduations and weddings,” he said.

While his parents and older siblings were born in Nigeria, Onyekwelu has never been able to visit his family’s homeland until now. As a graduation gift, he and his mother will travel there for a month, meeting aunts, uncles and cousins for the first time.

“Everyone except my immediate family still lives there,” he said.

Onyekwelu, his parents and four siblings moved to Little Rock when Bryan was 7 years old.

“I knew some English, but when my older brother moved here (from Nigeria) he was the one to teach me English,” he said.

While attending Immaculate Conception Church in North Little Rock, Onyekwelu was enrolled in the parish school and attended some youth events. When he arrived at Catholic High School in ninth grade, his parents were not yet ready to let their middle son get involved in too many sports. For his ninth and 10th grades, he watched from the sidelines. By his 11th grade, his parents conceded and Onyekwelu joined the football and track teams.

When the football team had some losing seasons, Onyekwelu said the hardship brought the team together.

“You get really close when every single day you are struggling with the same stuff,” he said. “Struggling through the heat, wearing pads for two to three hours a day. It’s hard, but it brings you closer as well. I’ve made some of my closest friends through football.”

One of his strongest memories of his time at CHS happened this fall when the football team beat rival Central High School and believed it was close to nabbing a spot in the playoffs. Two other teams were also in the running and knocked CHS out of contention.

“We found out we were in a three-way tie with two other teams and we found out we weren’t going to the playoffs. We kind of all broke down in tears. It was really, really hard, but it brought us even closer together… That was a real sense of brotherhood that Catholic High brings. It was at its highest at that time.”

While an injury at the beginning of his senior year kept Onyekwelu from being the starting position as safety, he still was happy to make a contribution to the team.

Onyekwelu, who will head off in the fall to the University of Arkansas at study information systems and finance, has been able to make a mark on his school as the president of REACH, Representing Everyone at Catholic High. The club members lend their time to volunteering in the community and raising money for organizations in the city. As the leader this year, Onyekwelu decided that twice a week throughout the school year members would pass “the bucket” to collect spare change during lunch. Each month a different charity like the American Cancer Society is chosen to receive the donations.

When he isn’t collecting money for REACH, he is participating in Jocks Against Bullying. Some junior and senior football players attend lunch with the freshmen and sophomores to squelch any bullying that might go on.

Onyekwelu admits that he hasn’t been able to be as active in his church and school as he has wanted since he also works five days a week.

“I started working at the rec center in Sherwood. I work at the front desk to sign people in and clean up the weights,” he said.

Catholic High senior signs on as a new seminarian